Dutch presence in Africa has not been as significant as this one in the Far East, but left a long lasting trace in the form of the language used today in South Africa – Africaans, a mixture of simplified and distorted language of 17th century Dutch peasants (about 90%) as well as languages of Malay, Portuguese, English and African Bantu.

Both companies operated there, VOC and WIC, and each of them pursued different goals. Africa interested VOC mainly as a supply point for ships sailing on the route between Europe and the East Indies. It was necessary to supply them with food and fresh water. The goals of WIC were different – this company was created to combat Portugal and Spain with military forces.

The history of colonization of this part of the African continent began with a Jan van Riebeck expedition. Three ships with the first settlers arrived on June 6, 1652 in the Table Bay, which is located on the southwestern coast of South Africa.  In the same year the city Cape Town was founded there.

The main task of the newcomers from the Netherlands was cultivation of vegetables and grains. It happened however that colonists became reluctant to any physical labor, due to the climate, and even rebelled against restrictions imposed on them by VOC, so the company decided to bring slaves there. They were brought from Angola, Madagascar, India and East Bengal. In 1780 the number of them was already 10 000.

Status of the colony this area received at the end of the 17th century. Its white inhabitants gradually turned into the growers and cattle farmers and growing demand for land and wish to gain independence from VOC led to their permanent expansion on inland. (At the end of the 18th century the colony covered an area approximately equal to the area of present Poland.) As a consequence of this process a separation nation was created, since 1707 known as Afrikaners or Boers (“boer” is a Dutch word for farmer). Those people highly valued their independence and – as was seen in the next century – capable of struggle with guns for their freedom. But at this moment those area didn’t belong to the Netherlanders anymore.

The presence of Dutch settlers contributed to the extinction of the indigenous Bushmen and Hottentots tribes, which were killed by diseases carried there by colonists. Especially tragic consequences had a smallpox epidemic of 1713. The history of this colony is also full of conflicts and wars with militant Bantu tribes, although the peace treaties were also concluded, as well as border and trade ones. Due to the lack of white women the Dutch did not avoid marriages or non-marital relations with African women, what resulted in the emergence of a distinct ethnic group known as the Colored people.They also have, mainly, the Afrikaans as language. 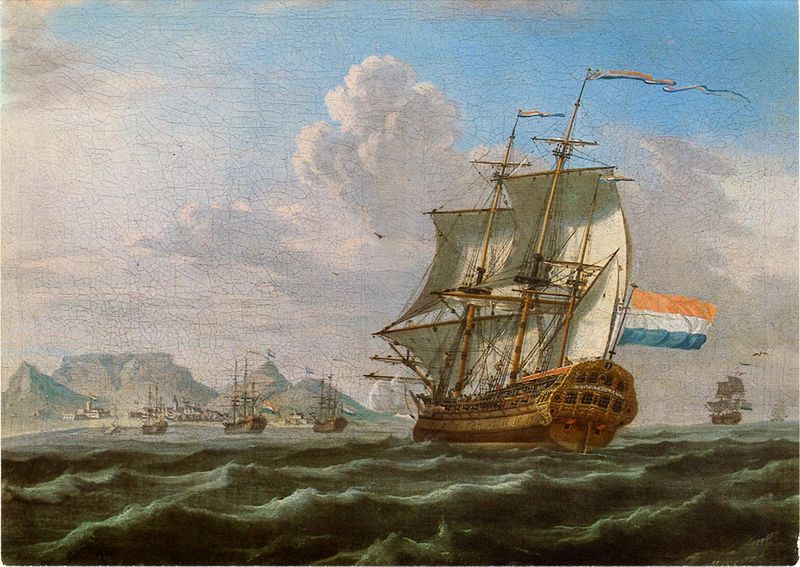 At the end of the 18th century VOC (in agony) and Republic of the United Provinces (in deep crisis) were not able to counter the growing power of England, who in the year 1797 attacked the Cape of Good Hope. After the Peace of Amiens in 1802 this area returned for a short time to the Netherlands (actually it was the Batavian Republic), but in 1806 was eventually annexed by the British.

Located on the central part of the West Africa coast, Gold Coast (the name is derived from the rich deposits of gold) was colonized by WIC at the beginning of the 17th century at the expense of Portugal, who had settled there much earlier. In 1637 Dutch forces seized fort Elmina and soon forts of San Sebastian (1640) and Santo Antonio (1642). Especially important became Elmina, a center of Dutch slave trade – the main WIC export commodity. 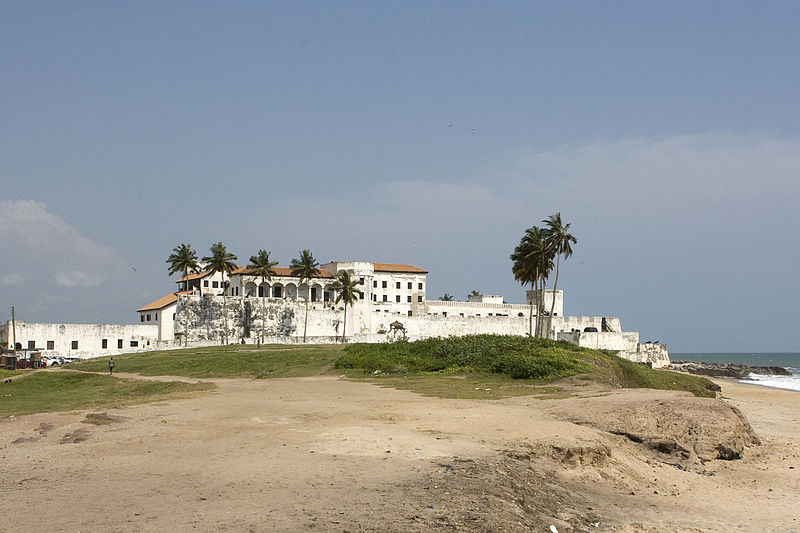 This lucrative business ended however in 1815 with a ban on the slave trade, which led to the decline of the colony. After 1815 Dutchmen used to recruit there soldiers for the Dutch East Indies army. In the years 1810 – 1814, during the French occupation of the Northern Netherlands, it was – along with the Japanese island of Decima – the only free territory of the country, unoccupied by the French or the British.

On the Gold Coast Dutchmen struggled not only with Portugal or Denmark and Sweden (having some colonies there), but primarily with England, who even took in 1782 a part of their territory –restored in 1784. A good relationship the Dutch maintained with local states, especially with the powerful Ashanti kingdom. They concluded peace treaties with them, and even paid them tribute. 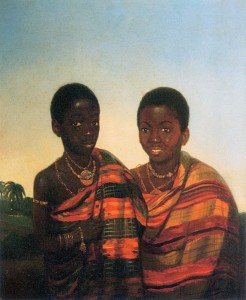 In 1836 two sons of the Ashanti king, princes Kwasi Boachi and Kwame Poku, were sent to the Netherlands to get there education. Kwasi Boachi studied at the University of Delft and was the first black engineer who worked for the Dutch East India mines. There was even a book about him, “The Two Hearts of Kwasi Boachi” (1997), written by a Dutchman Arthur Japina.

On the picture: portrait of the Kwasi Boachi and Kwame Poku princeses, JL Cornet 1840

In the mid-19th century the Dutch and the British decided to exhcnage some forts, to make it more responsive to their spheres of influences. In 1867 an appropriate agreement was signed, by which the Dutch forts east of Elmina became British and the British forts west of Elmina became Dutch. The consequences were disastrous for the Dutch because it led to conflicts with local tribes and disrupted their good relationship with Ashanti (new forts were surrounded by the Fanti tribes remaining in alliance with the British). So a very complicated war broke out involving Fanti and Ashanti and finally the Netherlands withdraw from their colonies and sold them in 1871 for the British for 46,939.62 guilders.  On April 6, 1872 the Dutch Gold Coast became part of the British colony.

Dutch Gold Coast – once the most important Dutch colony in Africa – became for a long time forgotten and was brought back to the memory recently by the novel „The Two Hearts of Kwasi Boachi”.