Amsterdam, the capital of the Netherlands, is located along the Amstel River. It is considered as the most multicultural place on Earth. Its population is 750,000, representing up to 177 nationalities. The second largest port in the Netherlands (after Rotterdam), and an important center of finance, culture, science and tourism. 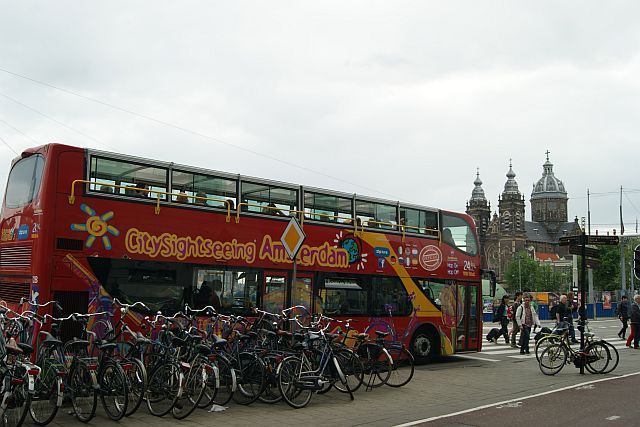 According to some legend Amsterdam was founded by two Frisian fishermen, who nailed the banks of the Amstel River on a boat, accompanied with a dog. One of the fishermen decided to build a house at the place that the dog would choose for rest. And so it happened. The dog ran onto the river bank, lied down and felt asleep, and the fisherman builded his house on that place. 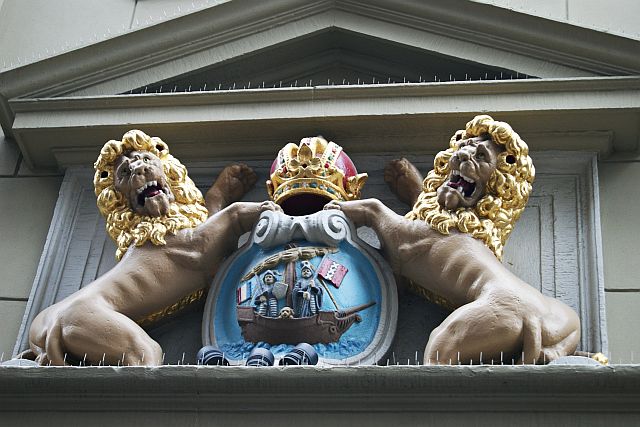 The old coat of arms

Scientists date however beginnings of the city in the year 1175, when the first settlers started their existence there. Initially they had a very hard life, but were at least free men, not having to pay taxes and not responding tribute to the feudal lords. Amsterdam is located in a place where the river Amstel flows into the internal IJ Sea, wich is rich in fish. Close to its mouth the Amstel is divided into several branches. One of them was the present Damrak, the most important water thoroughfare of the city. 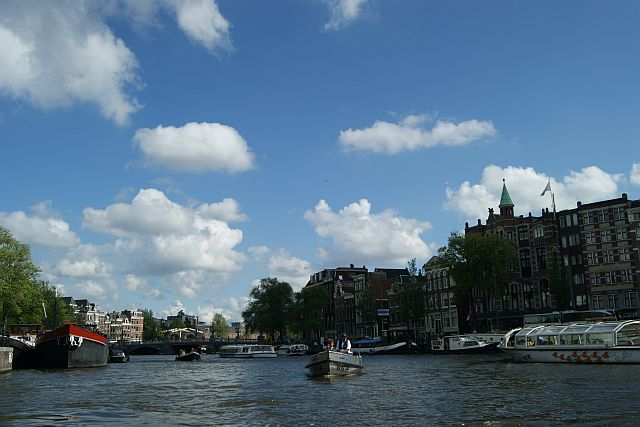 The residents of Amsterdam locked the waterway with dams and isolated it and this enabled navigation and control of the water level. The name of the city originates from the first dam. Originally it was Amstelredamme, or “dam on the Amstel”, later the name evolved into Amsterdam.

In 1602 the Dutch established the East India Company (VOC, we write of it in the Dutch East Indies), leading a very lucrative trade with the Far East. Up to 1611 Amsterdam denied the Spaniards, Portuguese and Venetians from there thus becoming the largest European importer of spices and other goods – very expensive those times. The big profits allowed the construction of water infrastructures in Amsterdam, what resulted in the development of a rather vibrant city. Already in 1613 the town started the works on the system of semicircular canals. 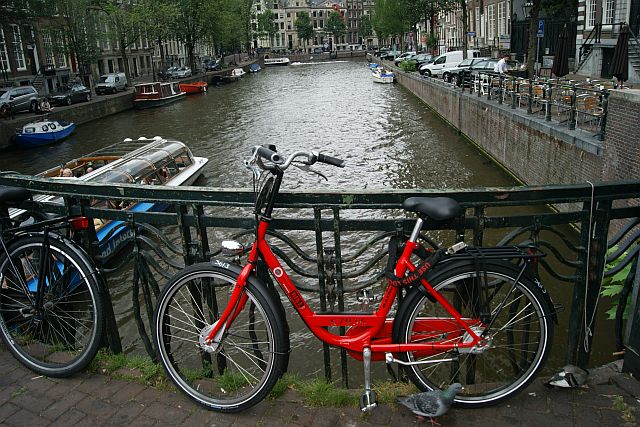 Traders were offered the opportunity to invest in the local economy and they were encouraged to build prestigious residences along the channels.   All houses built along the Amsterdam’s chanels are similar in height and width. (Due to the high price of land the houses are not broad). Wealthy merchants bought more than one plot and builded very large residences, decorated by renowned artists like Rembrandt, Hals, Vermeer, Bola, etc. 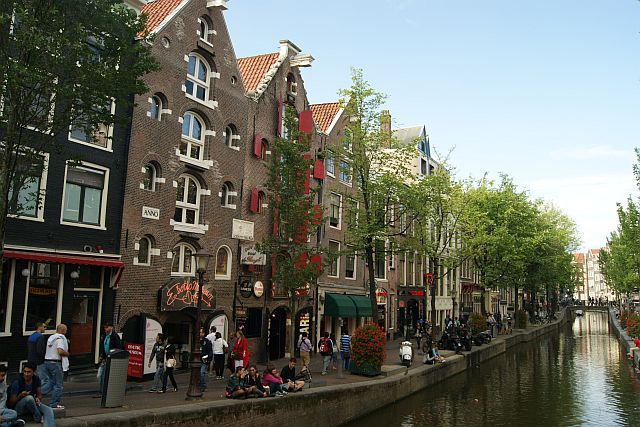 These houses also served as warehouses – the ground floor was for offices, lofts were for trade articles. They were transported up with cranes, which protruding beams still adorn many peaks. The historic center has left little room for modern architecture. The exception is the NEMO museum building, designed by Renzo Piano.

NEMO is the newest addition to past and present port areas, visible from many places in the city. Amsterdamers have their own name for it – “Titanic” – because it looks like a sinking ship. It was opened in 1997. From the top of NEMO it is possible to see an impressive panorama of the old city and an, in the summer popular, café and restaurant are opened there. 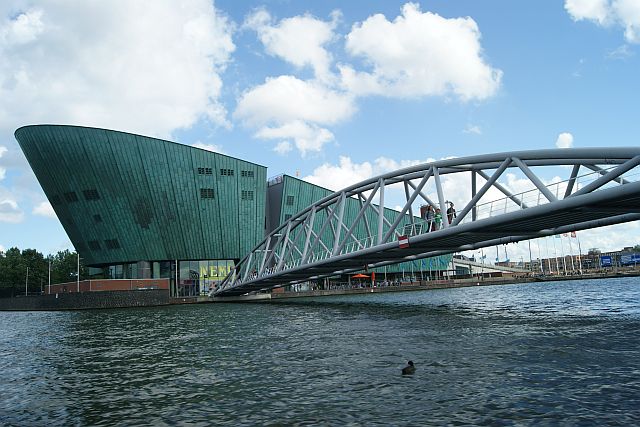 Children and young people appreciate other attractions which are waiting inside the building. There is a variety of interactive gadgets and inventions of modern times. The permanent exhibition “Why does the world go round” allows them to experience the lack of gravity and learn the secrets of chain reactions.

DAM SQUARE AND THE ROYAL PALACE

The most important place in Amsterdam is the Dam Square, the largest meeting place in the center for Amsterdammers and tourists. On the eastern side of the square is the Royal Palace situated, built in the 17th  century as a town hall, but transformed into a palace in 1808, in King Louis Bonaparte time.

Today the palace is no longer a seat of the sovereign.King Willem Alexander officially resides in The Hague. The building is only in use only during state ceremonies, like the submission of wreaths at the monument to the victims of World War II.

Memorial to the victims of World War

Anyone looking for peace and quietude can find it in the Begijnhof, the seat of the Order Beguine and – carried out by them to this day – a shelter for widows and single women. One has to enter it by a small gate closed with a historical door, marked only by a stone in the wall in one of the houses on the Spui square. In the middle of the courtyard there is a church called Engelse kerk, because once it served British settlers. The beguine nuns lived here since 1346, and were respected so much that they were not forbidden of practicing Catholicism in the time of Protestant domination. 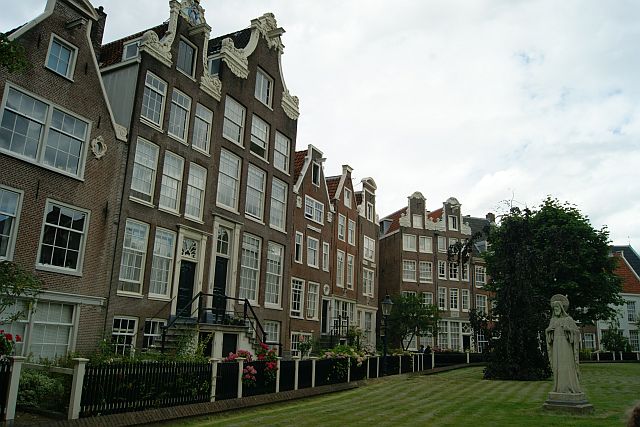 In this shelter dogs are not permitted and visitors are obliged to keep quiet as it is a place for rest, reflection and prayer.

MUSEUM SQUARE AND THE RIJKSMUSEUM

Amsterdam has its own district of museums – the Museum Square. Once it was used as a big parking lot for tourist buses. Today it is a large park with pavilions built of glass and steel, with shops and cafes. Above many museums the impressive  Rijksmuseum dominates with the most beautiful and the most outstanding works of Dutch painters of the Golden Age. 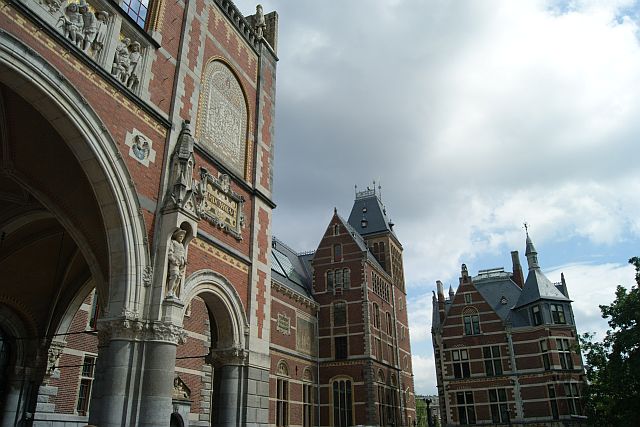 The paintings have been carefully selected so they are the most representative for the Dutch art and its variety of themes. A separate wing of the museum is dedicated to sculpture and ornamentation. One of the exhibitions shows the history of the Northern Netherlands and thus the most important moments in the past of the nation. The Rijksmuseum is huge, so to watch the treasures stored there it is necessary to spend at least a whole day inside.

For many tourists the most exciting place in Amsterdam is certainly the Red Light District, famous for its legal prostitution (read: Sex in the City). To get there it takes only a short walk from Dam Square along Damstraat on the Achterburgwal. The road leads to – name a few – Museum of Hashish, Marijuana and Hemp and to the Museum and Library of Tattoo. During the day the streets of the Red Light District are not different from other streets of Amsterdam. Only in the evening the façades light up with signboards of sex-shops or shocking windows with scantily clad women encouraging for erotic pleasures. 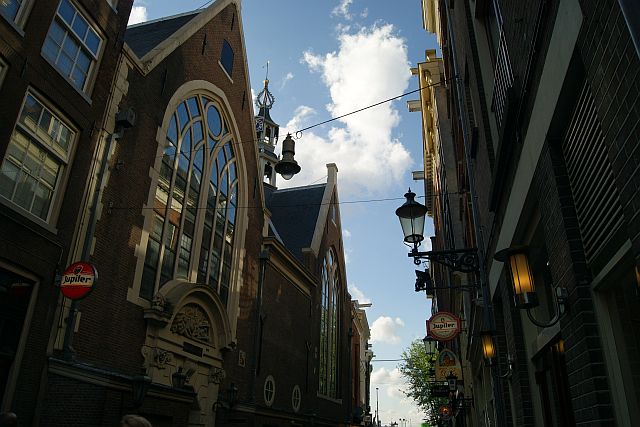 While the public and legal drug use in Amsterdam is due to a very liberal law, the prostitution is almost as old as the city itself. Instead of pretending that there is no prostitution problem, it was decided to legalize it. Prostitutes must have a license, are obliged to a periodic medical test (that order comes from the Napoleon time), and on their income there is taxation. The “immoral” ladies are represented in the Chamber of Commerce! Amsterdam tolerance toward sex and drugs attracts thousands of tourists to the city, and is the result of the famous Dutch maxim: “I do not like what you do, but I recognize that I have no right to interfere in your affairs and if you expect that, you will not interfere in mine.” 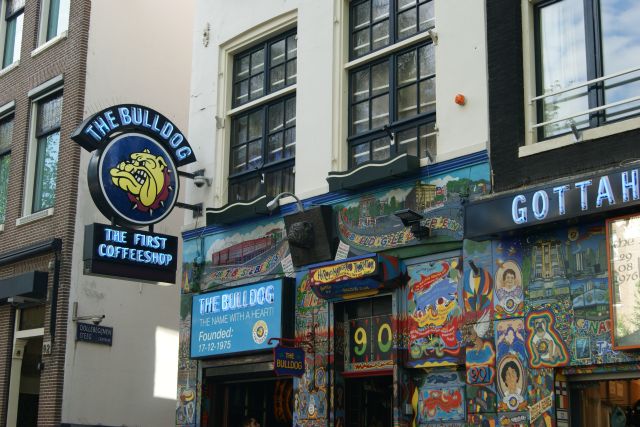 The Red Light District is close to the spacious square the Nieuwe Markt. Surrounded by cafes and restaurants, a market with flowers, cheese, fruit and vegetables operates there. It is famous for a building of Scales (Waag), which was converted into a popular dining place with a summer terrace. It was built in 1488 to guard the entrance to the city from the south, but when Amsterdam expanded its borders, that function turned out to be unnecessary. 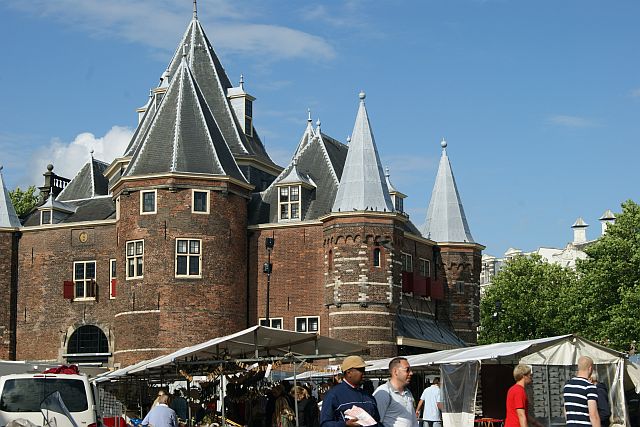 So it has been transformed into the public scales to let traders and producers check the weight of their goods.

The above-mentioned places and objects are only a small part of the attractions offered by Amsterdam, which is a city extremely diverse and inspiring. It is a place of many intellectual and artistic projects. It is also a kind of chaotic mixture of trams, bicycles, street musicians and organ grinders, where magnificent palaces and churches are adjacent to the museums of sex and drugs. 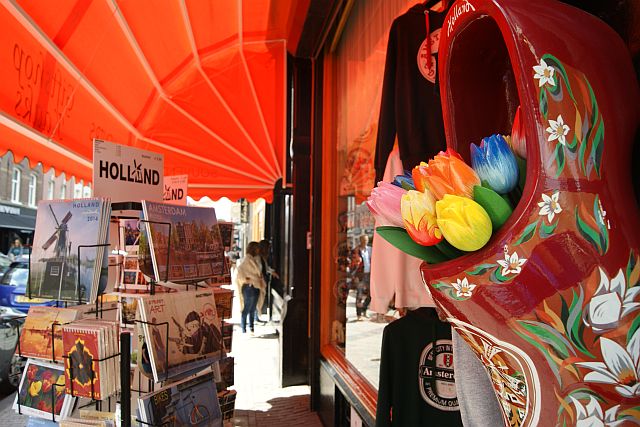 Typical shop with tourists gadgets, which can be clearly recognized by the traditional Dutch wooden shoes called klompen. 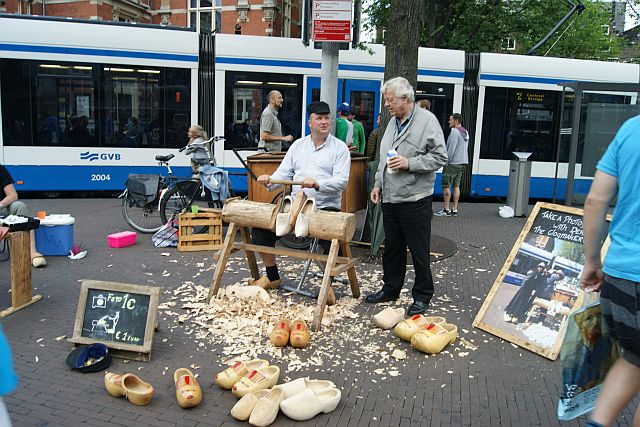 It requires only one step to find oneself in the quiet streets or places such as Begijnhof. It is a personal taste which of the many attractions to select.