Religious and social issues became very important in social-philosophical thinking in the northern Netherlands. In particular five “great” philosophers have made as freethinkers a contribution at the global level. Geert Groote and Desiderius Erasmus come from a Catholic background, Dirk Coornhert and Hugo Grotius were Calvinists and finally Baruch Spinoza was a Jewish one. Highly simplified, the ideas that they produced are as follows:

Geert Groote was born in Deventer but he spent his early years in the Rhineland, probably especially in Cologne, where he learnt the ideas of the heretics (Cathars). After the period of wanderings he settled down in Zutphen where he was the founder of the Brotherhood of Common Life. 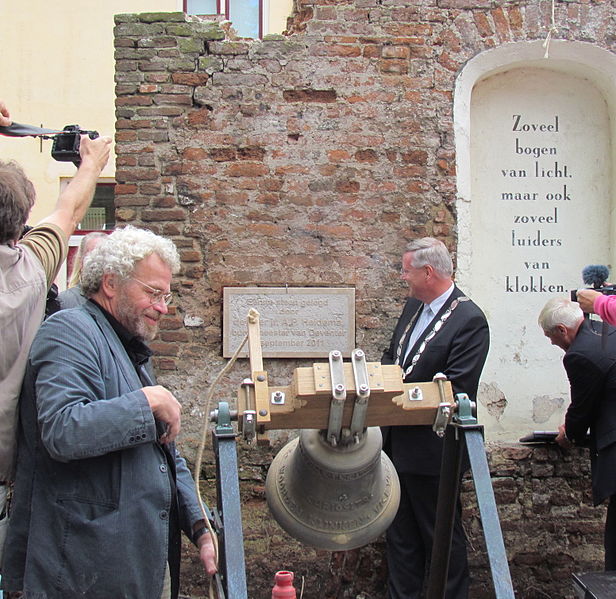 Practically, this meant the pursuit of a “rich” community property at the expense of personal property in the material sense. For example, if many people possess few books, is it not better that they have a combined, huge library consisting of all those books? Incidentally, all this without falling into black and white extremes. 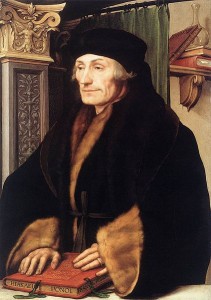 He translated many ancient writings, including parts of the Bible, into Latin and Greek. He learned Greek language at a school of the “Brotherhood of Common Life”. He saw helping “others in need” as a “Christian” duty, making him an early humanist. He perceived life not mainly as an earthly vale of tears but also appreciated  humor. His Praise of Folly is the first book written in not deeply serious way. It still belongs to the literature that is often read in secondary schools as an exam subject. Read also: The lost Erasmus Library.

Dirk Volkertsz Coornhert was born in Amsterdam. After making a trip through Spain and Italy he moved to Haarlem, living at the St. Jansstraat there. His parents did not accept his wife and disinherited him. For many years he earned money for living by being an etcher and engraver. He made very creditable prints and the famous Hendrick Goltzius was his student. He could also fight on the sable, play flute and lute, he was a poet (he is even named as the poet of the national anthem). He was a playwright and learned Latin at a later age so he could read the Church-Fathers in that language and was able to  translate the “Odyssey” from Latin. 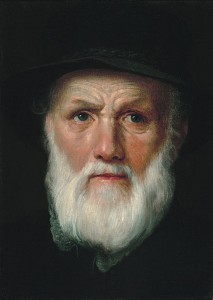 In 1564 he became the secretary of the College of Mayors of the city of Haarlem. In that capacity he met Prince William of Orange, who led the revolt against Philip II. This made him a suspicious man. After the iconoclastic (1566) he fled to Cologne. Born a catholic, he was grown a strong anti-catholic. After his return to the Low Countries he was judged by the Council of Law (a court which goal was to punish anti-Spaing rebeliants) and locked in the prison in The Hague until the end of 1567. In 1568 he fled to the tolerant Duchy of Cleves. In 1573 he returned again. After beeing for three months Secretary of the States of Holland, he had to move to Germany for the third time. He stayed then for about 10 years in exile, before he returned to Haarlem. Here he became a notary.

His many writings in the field of theology, morality, criminal law and constitution are written in Dutch instead of the common Latin. He has thus contributed to the enrichment and improvement of the Dutch language. However, he is therefore less known internationally than, for example, Erasmus with whom he can compete in importance.

Dirck Volkertsz Coornhert was a humanist. He was an important but undervalued versatile, tolerant and enlightened Renaissance thinker and writer in many fields. He wrote a huge amount of interesting publications (books, pamphlets, other written works, correspondences), all based on thorough studies. Coornhert had an influence on William of Orange, they maintained a close contact on thoughts about religious tolerance and freedom. He worked strictly from 04:00 to 22:00. Sleep was for him as an exercise in being death and thought it just a necessary evil. At the end of his life he moved to the tolerant city of Gouda. There was full freedom of press and a very liberal attitude to preaching in the  protestant St.Johns church. Also his friendship with the printer Jasper Tournay (who printed his books) was, may be, a motive. There (in his house, Oosthaven 17, Gouda) he died on October 29, 1590. On the wall of the cityhall there is a plaquette commemorating him. He is buried in the St. Johns church. 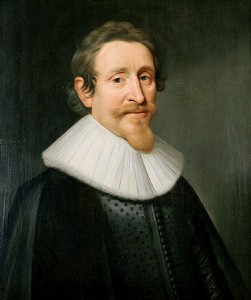 De Groot wrote Latin tragedies and poems, theological treatises and Dutch poems. His major works are about historical and legal matters. His most famous work is “De jure belli ac pacis” (On the “Right” of war and peace”) in 1625. This work forms the basis of modern international law. Hugo de Groot is also known for his advocacy of free access to the sea (and free trade), what he expresses in the book “Mare Liberum” (1609). He thought logic and knowledge are the highest principles. In the dispute between Arminius and Gomarus he, a lawyer, supported the latter. Becouse these ideas splitted the Dutch nation (that was fighting in the 80-years war for freedom) he was seen as an enemy of the state. So he was jailed at the Loevenstein stronghold. There he was permitted to continue studying and writing. 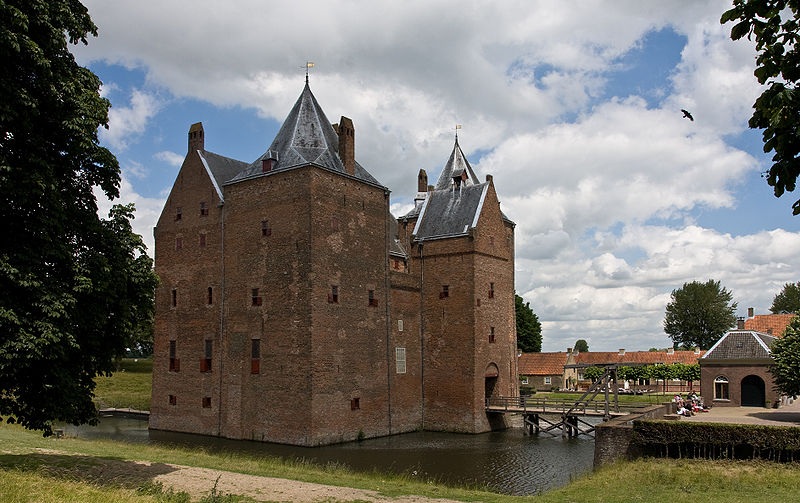 Books that he needed, were brought to Loevestein from Gorinchem in a bookcase. The bookcase was strictly controlled in the beginning, but later it got less attention from the guards. As a result, a plan of escape was hatched. Following it de Groot had to train lying quietly the bookcase. The training lasted for two hours at a time, the duration of the crossing to Gorinchem. On the day the fair was held in Gorinchem, Hugo crawled in the bookcase and was partly escorted by Elsje Houweningen, transported out of the castle. The bookcase was not checked due to the festivities. Around 8:30 pm the coffin was brought across the Waal/Merwede rivers. He arrived in the town Gorinchem at around 10:00 o’clock. At 14:00 he was dressed as a bricklayer and left to the south. After a ride through the Land of Altena he came in the evening around 22:00 in Waalwijk. There he boarded a stagecoach. 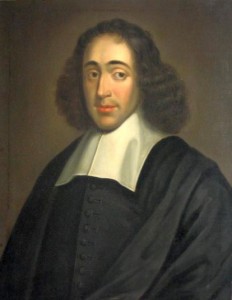 Baruch Spinoza was a Dutch philosopher, mathematician, political thinker and lens makers. He was a natural philosopher who denied the miracles of Christ and accepted no other explanation than one based on reason. He suggested that the Biblical prophets were ordinary people with an extraordinary imaginative power that did not speak on behalf of God. He developed a philosophy in which theology played no role at all and is applicable to any religion. He suggested that God and nature are the same and that understanding of nature also enhances the knowledge of the divine.

His books were banned in most of Europe for over two hundred years, because his historical biblical criticism could lead to atheism and fatalism. As a political thinker he thought the power of the state should never lie in the hands of a few persons because that could lead to decay. Because he was a Jew, his thorough knowledge of the Hebrew idiom was of a great importance for Biblical Studies, not only in the Netherlands. 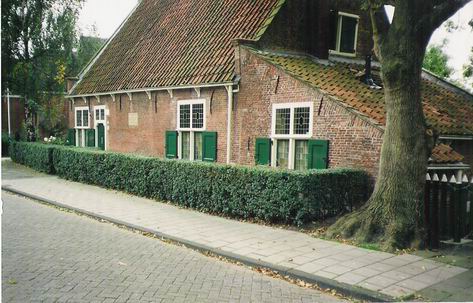 His “Theologico-Political Treatise” (Theological-political views) appeared anonymously in Spinoza’s life time in 1670. It gives one of the first logical analysis of the Bible and provides arguments for a religious freedom and tolerance. Spinoza closed this book with a glowing reflection on the freedom Amsterdam provides to its citizens.

The Ethica
His life’s work is the Ethica ordine geometrico demo strata. It was published after his death in year 1677. Although the main subject is ethics, this work begins with a comprehensive exposition of Spinoza’s metaphysics. Following Descartes, Spinoza view was based on the idea that mathematics is an example of the philosophy. The entire work follows the ‘geometrical’ method, in imitation of Euclid’s Elements: definitions, axioms, theorems, proofs and inferences. Spinoza assumed there exists only one substance, which he understood as that which exists in itself and must be understood by itself. It is its own cause and is equated with the whole of nature, or God. The attributes of this substance are infinite in number and together constitute its essence, however, the man has only two, namely suspicion. And extent. Individual things are modes of this substance.