There is a lovely village in the Netherlands with no roads and its residents – with cows together – move on by boats. At least, it used to be that in the past, because since Giethoorn had become extremely popular, for the convenience of tourists the way along the canals was built. Ah, those tourists!

Located in the province of Overijssel, Giethoorn is a charming village, where farms are located along the cannels with a total length of more than 4 miles. The edges of the cannels are often connected with narrow bridges, but who wants to visit a neighbor who lives on the same side, has to use the boat. 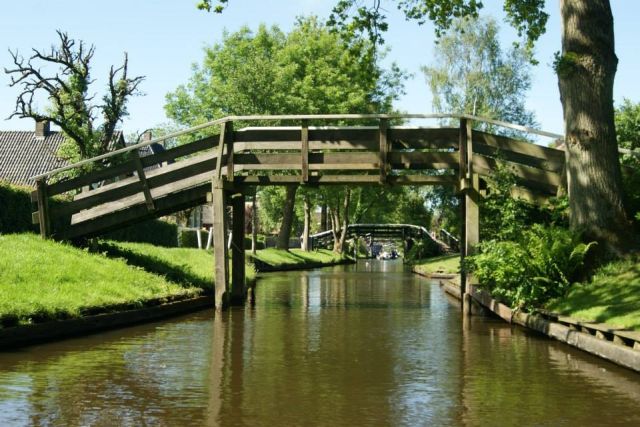 Boats transported cows to the pasture, milk churns as well as wedding or funeral processions. And that has happened for centuries, since the history of the village dates 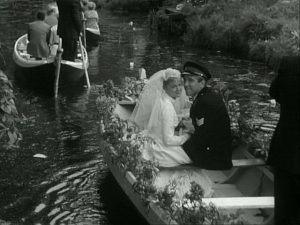 back to the 12th century. On Novem-ber 18, 1421 that place was totally destroyed by the terrible flood – the so – called “St. Elizabeth flood (which destroyed the vast majority of the historical polder “Zuidhollandse Waard”) – and since then water has become common here. But it was also the feature which made Giet-hoorn famous and attractive for tourists, as it is said in the opening of one of the most popular movies of the Dutch cinema comedy Fanfare from 1958, directed by Bert Haanstra. In this picture Giethoorn is the village Lagerwiede, and about its values it says the following:

“This is an unusual village. Not so much the people, but because of what Lagerwiede has: masses of water. There is so much of it, there is no room for streets. There is only room for a narrow path. They [tourists] wouldn’t want a wide road. For then Lagerwiede wouldn’t be unusual. And no one would come and visit it anymore”.

And there is a lot of truth in that, because tourists used to come here (both in 50’s and today), especially for a great boat ride and admiring historic homesteads. Some of the buildings with thatched roofs originate from the 18th century. 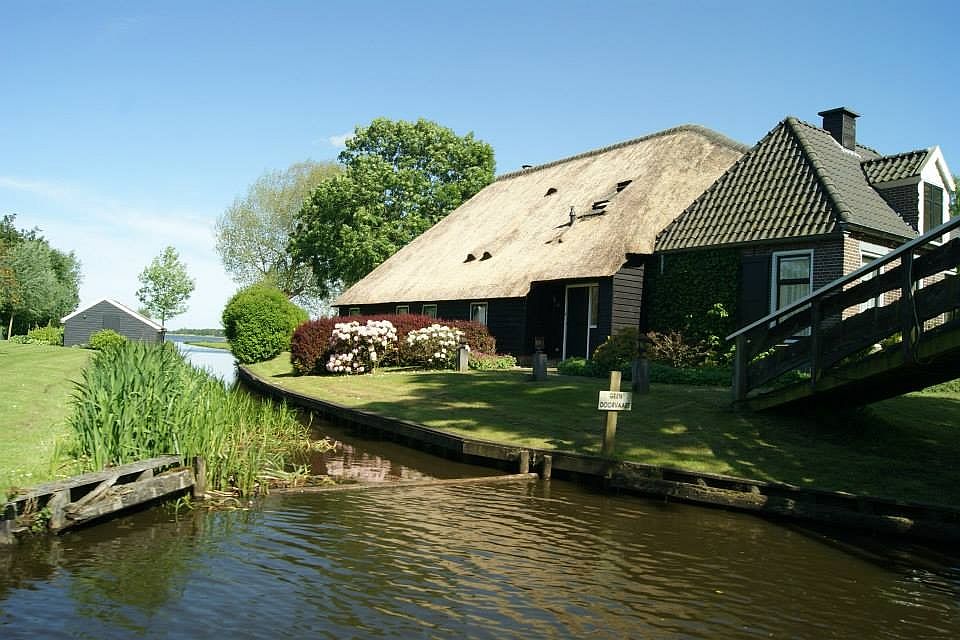 But thanks to “Fanfare” much more visitors come there today. To really enjoy the ride through Giethoorn it is necessary to know what is the charming comedy about.

The protagonists of “Fanfare” are members of the village brass band, which is gearing

up for a regional competition. Ridiculed by Mr. Geursen for falsifying on the trumpet, Mr. Krijns decides to leave the band and make your own, rivalry orchestra. Add to it stealing instruments and pennant, and secret Krijns’ orchestra rehearsals in the barn. Impatient with those quarrels, the Lagerwiede mayor announces that the place in the competition is for that ensemble which has the most members (so far both teams have 12 musicians each one). According to this decision Krijns and Geursen try to get the thirteenth musician. Meanwhile, Geursen’s daughter has an affair with a policeman, which is under a heavy influence of Krijn’s wife. 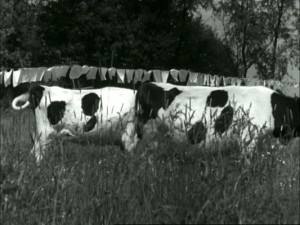 One of the first sequences of the film is one of the funniest scenes in the history of the cinema. We can see two cows standing without any movement but approaching, and passing, each other in the thick grass. After a while the camera shows the animals standing on the rafts and just floating on the cannel hidden in the grass. It was not an original idea as Haanstra saw it in Giethoorn and used this funny idea in “Fanfare”.

Who wants to know the idyllic and peaceful Holland of the late 50’s, the Netherlands, that no longer exists, can find it in the Haanstra movie. The village has not yet looked as elegant as nowadays, now the houses are beautifully decorated by trimmed grass and flowers, but it was the time of innocence and peace. Life was running there slowly, it can be said that it followed the rhythm of a slowly floating water. But those lovely little bridges have survived, just as buildings where movie scenes were filmed. 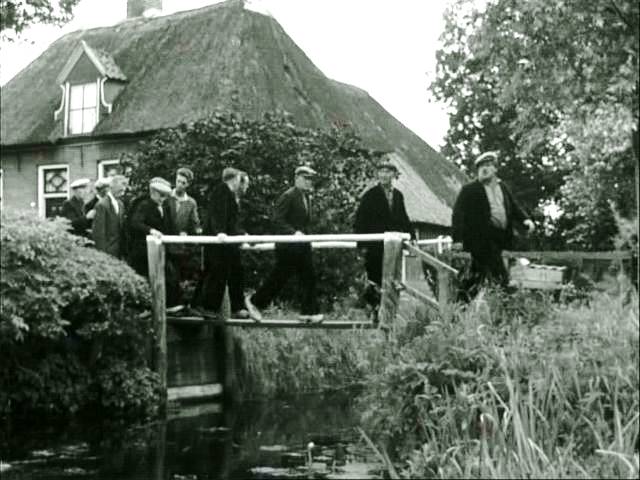 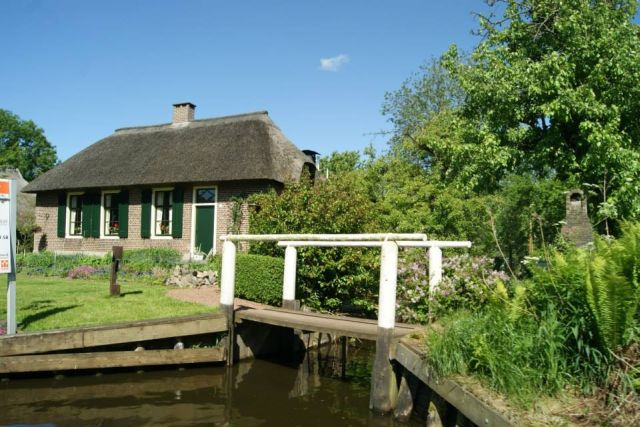 These include the inn named presently “Café Fanfare”. There is a very special bench commemorating director Bert Haanstra, who enjoyed much his work in Giethoorn. But Giethoorn attracts tourists not only because of “Fanfare” and boat rides along the canals and nearby lake. (Fanfare the movie). 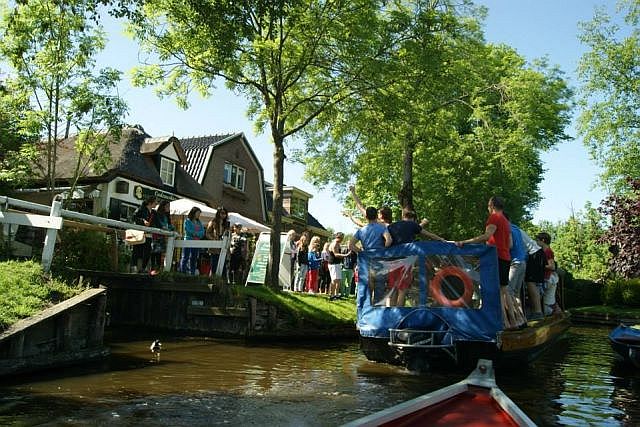 The big attraction is local cuisine which serves fish that due to the high quality of waters appear here in large numbers. So there are many reasons to pay a visit in Giethoorn!

Poland has the poor (let say the bitter truth) equivalent of the Dutch Giethoorn. The village – founded by Dutch Mennonites – is named Tropy Elbląskie and is located in Żuławy, nearby the city Elbląg. In the 19th century the only one communication way to it was the cannel. As nobody cares of it and nobody cleans it, it is overgrown with plants. 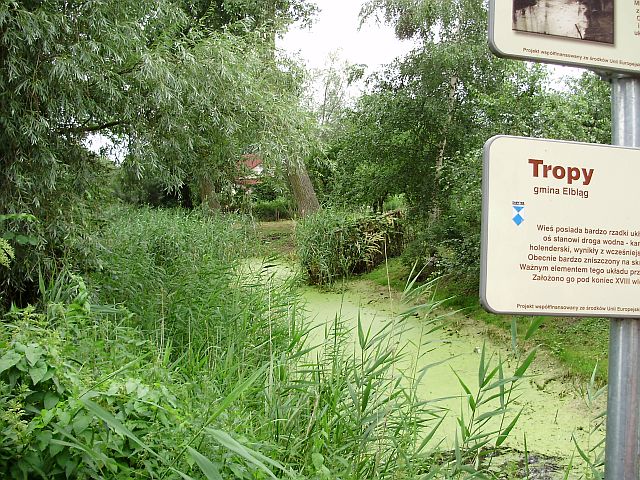 The same concerns remains of the small cemetery, and historic houses with arcades wich are in ruins. Maybe if people could see “Fanfare”, they would have noticed in their village advantages that would turn it into a big tourist attraction?