The Netherlands are again a monarchy since March 16, 1815, after the coronation of Prince Wilhelm VI, to Wilhelm I, King of the United Kingdom of the Netherlands. 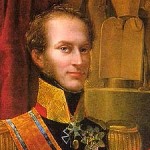 stic that Wilhelm I appointed himself as king, so his power, like the one of his successors, does not come from God. In this respect the Dutch monarchy differs from other European monarchies – kings (in law there is only the concept of “the king”) shall not be anointed in the act of coronation. Those, who abdicate, immediately provide all power to their successors. It seems abdication is the most popular way to get a new monarch in the Kingdom of the Netherlands. On the picture: Wilhelm I.

The ruling dynasty is derived from the House of Orange-Nassau, which since the 16th century played a significant role in the political history of the Netherlands (read: The House of Orange). Until March 16, 1815 their representatives were usually high-ranking public officials, so-called “stadhouders” (elective or hereditary), so Dutch monarchs do not separate from society with meticulous etiquette. They even willingly establish direct contact with people. Indeed, this is the only possible model of governance in a country whose citizens are deeply committed to democracy and really hate authority and hierarchy.

Powers of the monarch

This does not mean, however, that the power of the Dutch monarch is only illusory, and his role is purely ceremonial. In comparison with the British rulers the Dutch monarch has in politics a bit more to say, as he may have, to some extent, a real impact on policy. His role and position are defined and limited by the constitution of the Netherlands (ca. 1/3 of its content is devoted to the monarch). The basic rules are as follows: 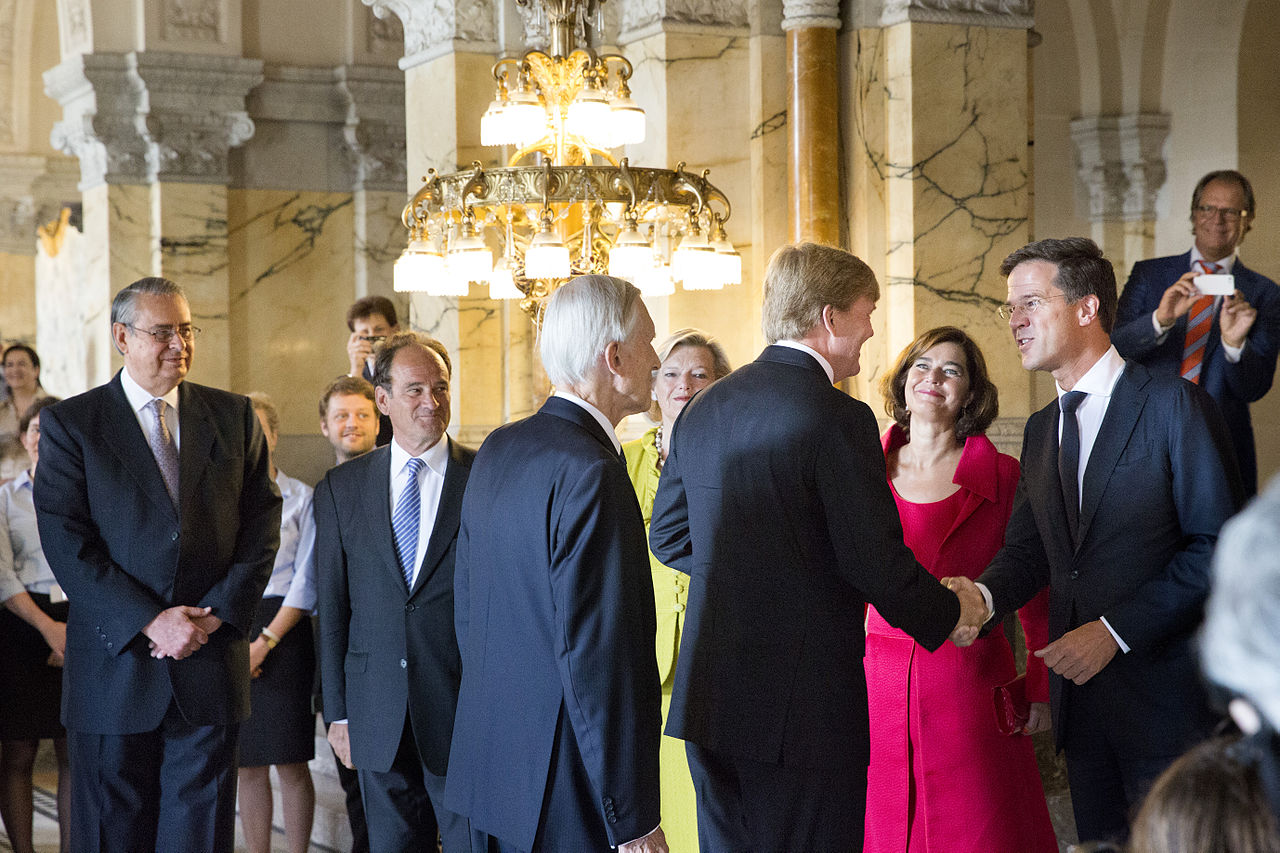 Every Monday the Prime Minister informs the king of the decisions of the government, which holds its meetings on Fridays. This is an excellent opportunity to provide advice to the Prime Minister as a result of the king’s experience and knowledge of issues, in which the monarch  may manifest informal influence on government decisions.

The monarch acts as head of state. He represents the Kingdom of the Netherlands at home and abroad. Every year he undertakes state visits abroad and receives foreign heads of states and governments visiting the Netherlands. 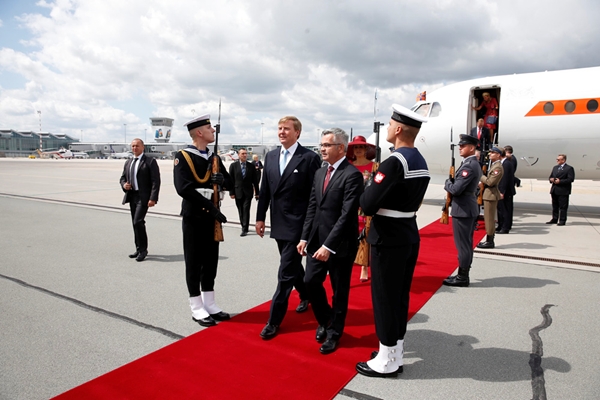 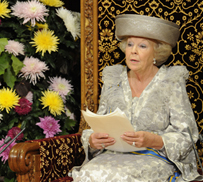 State Opening of the Parliamentairy year (Prinsjesdag), which has to be held every year on the third Tuesday of September. In the speech the monarch sets out the main features of the government policy for the coming parliamentary session. In the process of influencing the Dutch political life the monarch has another important advantage. After the election he chooses normally the people involved in the coalition talks and in the process of forming the new government (they are called “informateur” and “formateur”). With a very fragmented party system as in the Netherlands it is a complex and usually long-term process. (This rule was abandoned, however, after the elections of 2012, when the negotiator had been appointed by the speaker of the Lower House.) The monarch also works actively on behalf of the people of the Kingdom of the Netherlands, playing his very cohesive, representative and encouraging role. The monarch binds people and population groups together and supports the activities of persons and organisations that play a cohesive role in the society. As such, the monarch is always neutral. The monarch regularly attends conferences, meetings, celebrations, remembrance ceremonies.

Acquisition and end of the reign

Taking over of power by the monarch is done by two ceremonies:

The swearing takes place at the public joint session of the two Houses of the “States General” – the Senate and House of Representatives. The monarch swears (or affirms) allegiance to the Charter for the Kingdom of the Netherlands and the Constitution. 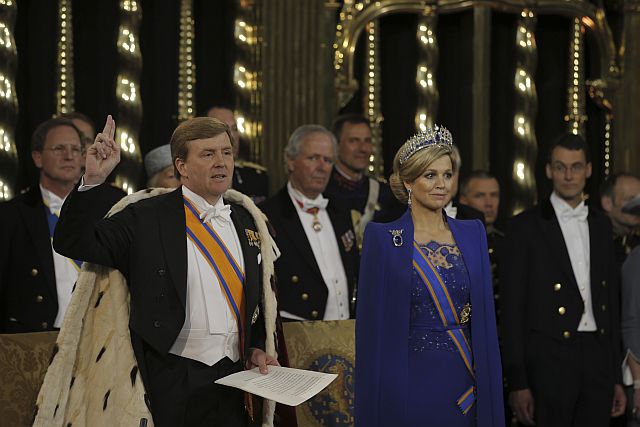 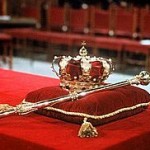 The ceremony of investiture takes place in the Nieuwe Kerk in Amsterdam (the present form dates from 1840), but is purely secular. During it the regalia are displayed on a credence table: the crown, the sceptre, the orb, the sword of state and the national standard (the king’s flag), along with a copy of the Constitution. Since Dutch monarchs are not crowned, they never actually wear a crown! 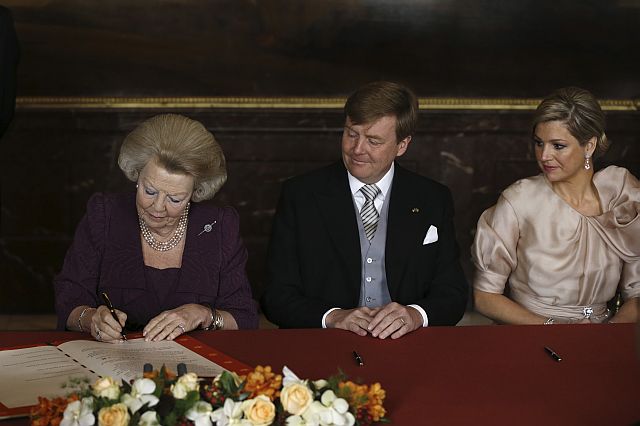 According to tradition, the Dutch monarchs and members of the royal family are buried in the Nieuwe Kerk in Delft, in the same crypt in which William I of Orange rests.  The crypt is closed for public and only members of the ruling family are allowed to get in. There are no strict rules to the royal funerals, but usually the coffin with the deceased is transported to the Nieuwe Kerk in a horse-drawn hearse. The main entrance of the church is only opened for that occasion. 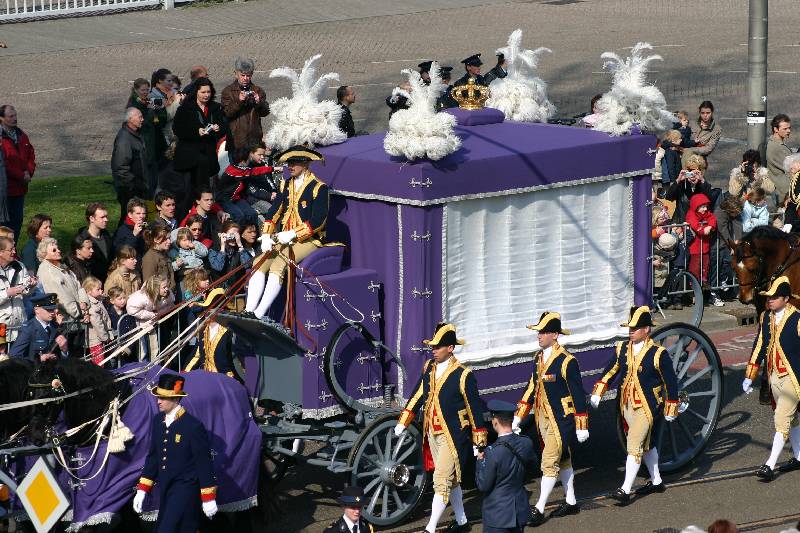 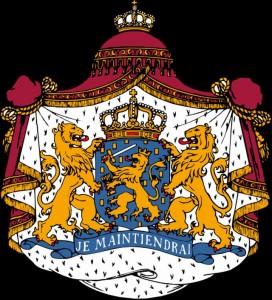 Motto Je Maintiendrai (“I will maintain”) comes from the coat of arms of the old House of Chalon and was adopted by Wilhem I of Orange.

The lion comes from the coat of arms of the House of Nassau.

The sword and sheaf of arrows in the lion’s paw come from the coat of arms of the States General of the Republic of the United Seven Provinces (16th, 17th and 18th centuries). The seven arrows stand for the first seven provinces. The arrows also symbolise cooperation: individually they are vulnerable, but together they are strong. 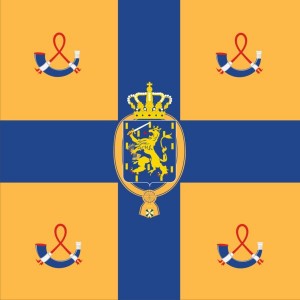 It is actually the monarch’s flag. It is an orange flag bearing the coat of arms of the Kingdom, surmounted by a crown and surrounded by the insignia of the Grand Cross of the Military Order of William. The flag is divided into four quarters by a cross of Nassau blue, with in each quarter a blue bugle-horn, which originated in the arms of the principality of Orange. The royal standard is flown above Huis ten Bosch Palace and Noordeinde Palace when the monarch is in the Netherlands, not necessarily in the palace.

The royal family has three official palaces at its disposal: Huis ten Bosch in The Hague (the private residence of Queen Beatrix); Noordeinde Palace in The Hague (the king’s office) and the monumental Royal Palace (Koninklijke Huis) in Amsterdam, used mainly for ceremonial purposes.

There is also Soestdijk palace, which was until 2004 the seat of Queen Juliana, but now is unoccupied and open to the public.

During his official duties the monarch can travel by train or plane for free (albeit without a total reservation), there are also some cars including drivers to his service and there is a royal train and a royal bus. The royal family (the monarch, the royal spouse, and children) are dependent on taxpayers. The spouse of the monarch, the heir to the throne and his spouse are not allowed to engage in any gainful employment, and therefore receive a benefit from the state, the so-called stipend, which is not subject to taxation (Willem-Alexander pension is 850 000 euros per year). Keeping a monarchy costs the Netherlands tens of millions of euros per year. 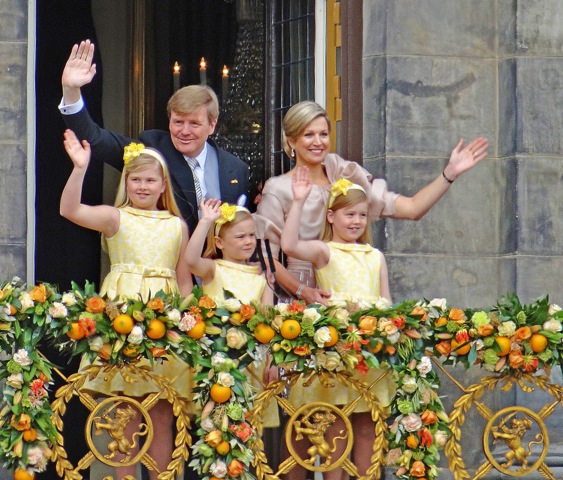 Public holidays/ceremonies related to the monarch

Prinsjesdag (the day for the princes)
On this day the reigning monarch of the Netherlands addresses – in the Speech from the Throne – a joint session of the Senate and House of Representatives in the Ridderzaal (Hall of Knights) in The Hague. It is a very big attraction as the monarch arrives at The Binnenhof (a complex of buildings in The Hague where all the meetings of the Staten-General take place) in the Golden Carriage, accompanied by the other members of the Royal House. The monarch is escorted by court dignitaries and military escorts of honour. Also outside the palace stands an escort of honour and a military band. 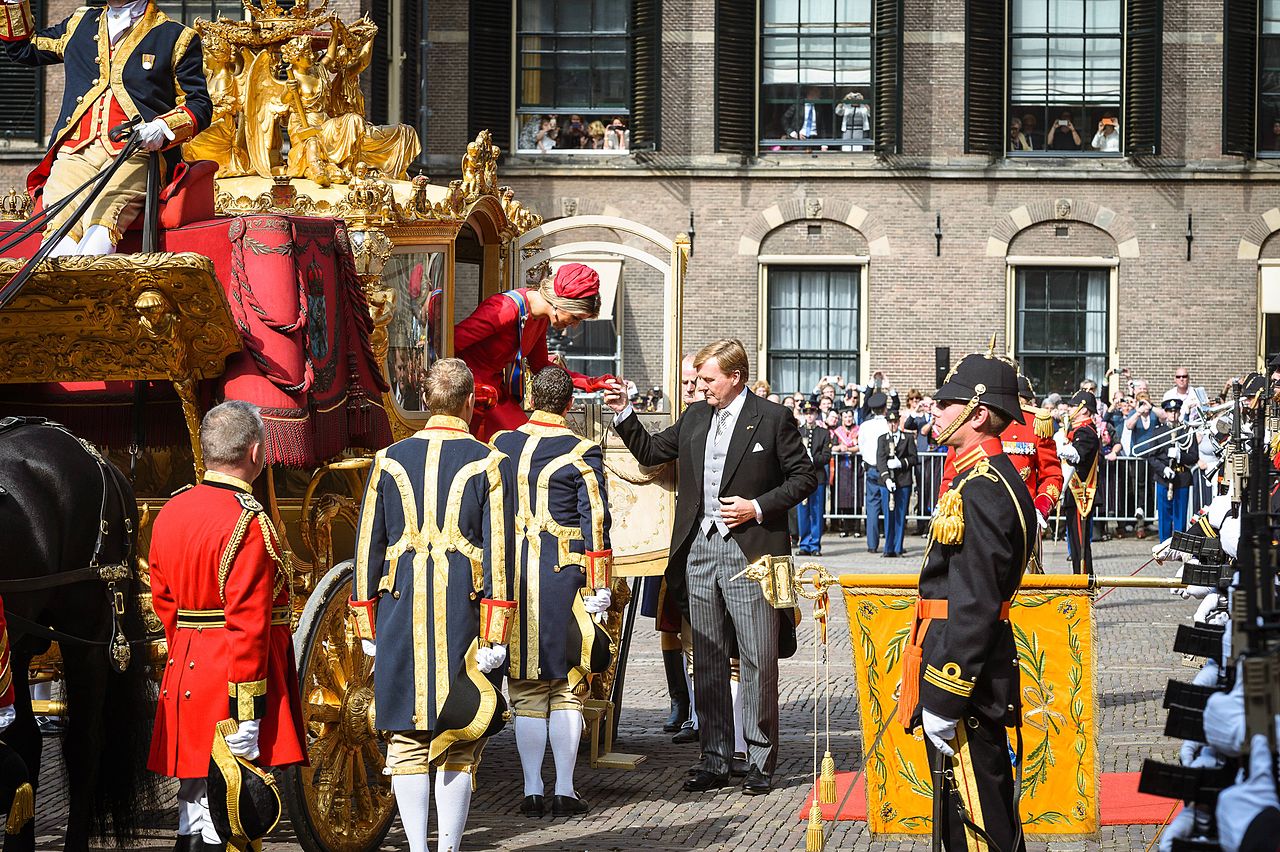 Queen / King’s Day
It does not relate to official state ceremonies, but celebrates the monarch’s birthday what gives occasion to unite the Dutch in a kind of a big street carnival, which takes place all over the Netherlands. That day Dutch people, dressed in orange, go outside to enjoy various kinds of entertainment, play music on the streets and what is the most charatecteristic – sell various things in the free markets (vrijmarkten). Up to 2013 it was the Queen’s Day, celebrated on April 30; after 2014 it is held on April 27, the birthday of king Willem-Alexander. 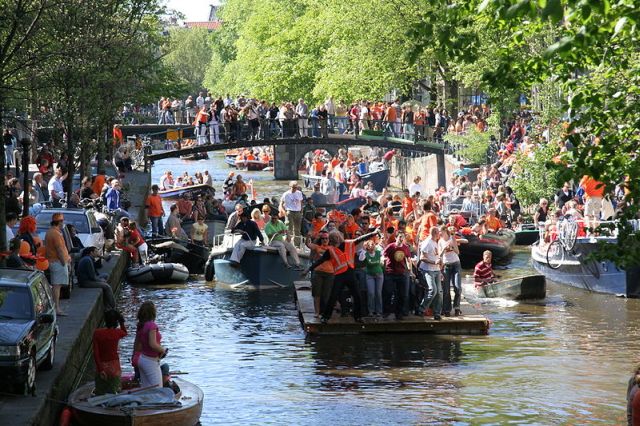 The monarchy and the Dutch

The Dutch are practical and frugal, so they like to complain about the high cost of the maintenance of the royal family. In response to a financial crisis some of them dem 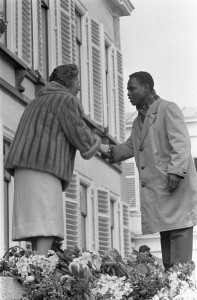 and cutting the grant and impositioning tax on the ruling family and also reducing political role of the monarch. The last monarch who wished to have a real impact on policy was Queen Wilhelmina, who in exile during World War II went so far as to dismissing an inconvenient Prime Minister.
Her successors, Juliana and Beatrix, were satisfied with the role of “the mother of the nation” and being a factor of unifying the Dutch. Dutch queens always cared much about good relations with their people, they avoided any pomp and superiority, which is not welcome in the Netherlands. Their position was built on personal authority, which brought them big respect and much popularity, although the monarchy was experiencing crises sometimes, such as those related to the very unpopular marriage choices.

Despite the anachronism of the institution most of the Dutch prefer a monarchy above other political systems. According to the Institute Synowate 75% of the population is satisfied with the monarchy, more than 50% believes that nothing should change, and only 11% of the 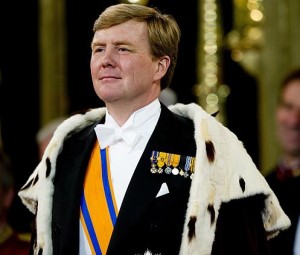 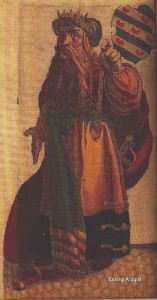 The rulers of the Orange dynasty are not and were not the only kings in the history of the Netherlands. In the early Middle Ages, during the Frankish empire, a kind of monarchy existed in Friesland. The first alleged “king” was probably Audulf, ruling in the years 600-630 (it is known by preserved coins with his image). Real figures, mentioned in historical sources, were successive rulers of Friesland: Aldegisel, who died about 678, Radboud (680-719), who ruled when the Friesian state reached its apogee, and Poppo (674-734) – the last king of Friesland. Eleven centuries later the crown of the Netherlands was put on the head of Louis Bonaparte (1778-1846), who reigned from 1806 to 1810 and was imposed by his brother Napoleon. He abdicated because he was loyal to the kingdom of the Netherlands and did not want to pursue the absolute and unfriendly policy of Napoleon towards this country.