July 3, 1974, Dortmund Westfalen Stadion. The match Brazil-Holland established the end of the old age and the beginning of a new one: after that game football has not been the same anymore.

The Dutch system of playing revolutionized the game’s concept and made the whole generations to study new idea to develop it or simply to imitate it. After that match the modern age of this sport has begun, a real tactical revolution based on the concept of setting the players that represented the modern tactical theory:  the “total football”. In the total football the position is the game’s core, not the individuality of players, and this means a continuous change of the roles of the players. A player that moves out from his position with the ball is soon replaced by another player in a continuous switch of positions where the single players can become defenders midfielder and forwards, depending on the specific game situation. 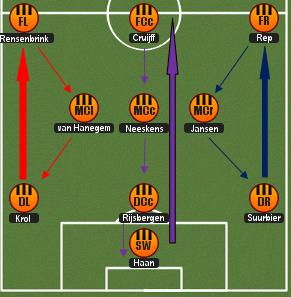 The total football (Laranja Mecanica) was invented by Rinus Michels. His most known phrase was: “football is like war” (the winner gets it all). So his nickname became: “the general”.  On the grant reception, when he went into pension, the famous singer Lenny Kuhr sang a special song for him “De Generaal”. 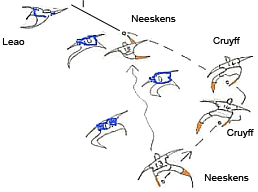 That far rainy evening of the 3rd July the Dutch players applied the total football, made of pressing, running and switching of positions and shoots from everywhere towards the goalkeeper Leao’s door. Brazilian champions were sure to win, but that rainy evening they suffered much of the Dutch hurricane and resisted for only one time-match.

Diagram: a goal scored to Brazil in 1974 by the Netherlands.

This orange tactical theory logically requires that players are comfortable to play all roles and must meet the highest technical and physical requirements. The Dutch team in this sense was like a big orchestra where each musician could play all the instruments; they missed only the genius of a soloist able to give the rhythm and to provide his talent to the team’s service. Well, they didn’t miss it at all! They had though Johan Cruyff (1947 – 2016). 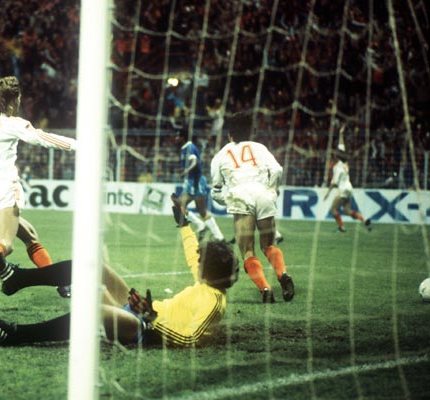 Johan Cruyff is one of the big football legends that all football lovers know well, with his jersey number 14, his talent in dribbling and making goals and with unusual p 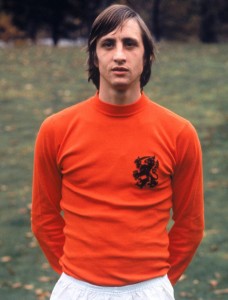 ersonality during the game. Like many genius he had a rebellious character too and out of the field not always this character was an advantage for him. Very often his affirmations to the media draw him like an arrogant and a superb man. His most famous affirmations were like this: “I don’t expect a day when people, talking about Cruyff , won’t know who they are speaking about “ or “Before making mistake I avoid to do it“, but this was just the character of Johan, take or leave it. In the Netherlands a book was written about his quotes and besides their bad gramma they are cited during management’s seminaries.