The melody of a French soldier song, the Chanson de Chartres of 1568, would be the basis of the Dutch national anthem. It is today considered to be the oldest hymn in the world. Also in that year (1568) the 80-year (freedom) war against Spain and the Catholic Church (and their rules) in the Netherlands started. By that war, the seven northern provinces became a free (and protestant) republic.

English translation of the Wilhelmus.

When the Wilhelmus was officially adopted as national anthem, in 1932, of the Nether-lands, it was thought that the nobleman Marnix van Sint Aldegonde (mayor of Antwerp) its author was. He was around 1570 befriended with the House of Orange. The problem is that never a single link was found between Marnix and Chartres. 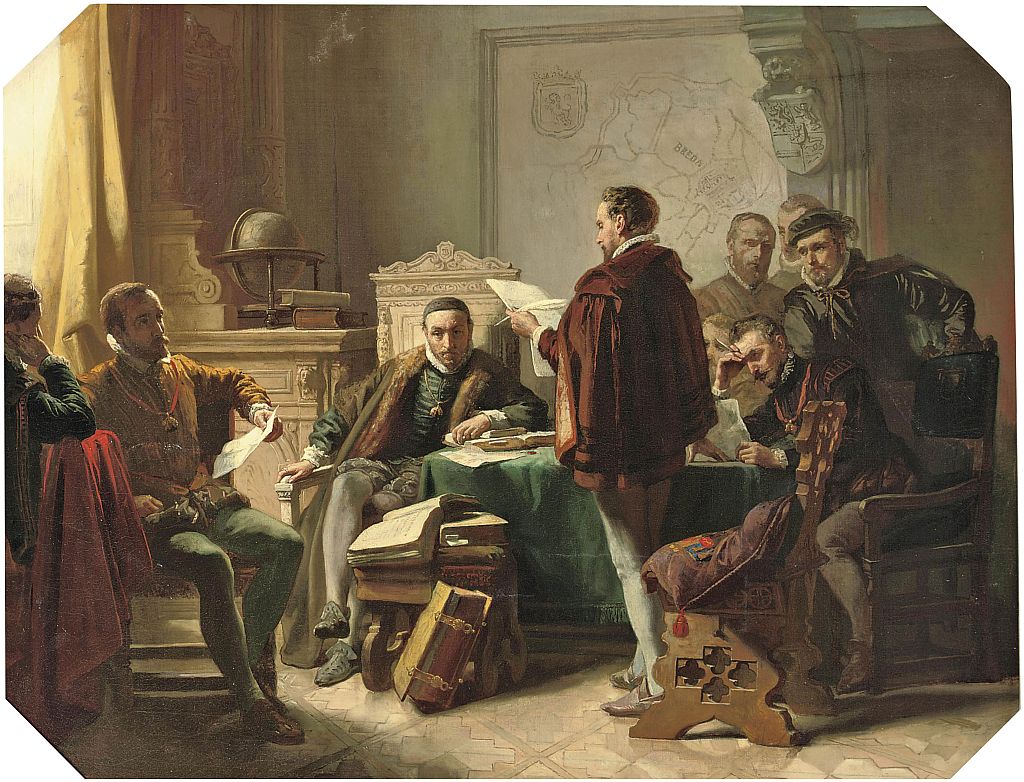 Philips of Marnix presents the Wilhelmus to William the Silent,
by Jacob Spoel (ca 1850).

Computer programs that compare the words used and writing style to explore a variety of texts from unknown authors to date texts by famous authors and a suspected writer to provide, now indicate (2016) Peter Datheen as presumed author. Peter Datheen, a preacher and poet of the 16th century, was present at the siege of Chartres in 1568, where that song was born. So he knew the opposition song: Chanson de Chartres and also had the skills to write the text. He also wrote famous ancient metrical psalms.
In the picture: Peter Datheen.

The structure:
1* The full text consists of 15 sentences. The Wilhelmus is an acrostichon: the first letters of these 15 verses are the word “Willem van Nassov” (Nassov is the old form of Nassau). In modern Dutch, the first words that started with an “S” have been replaced by the present Common “Z”.

2* As with many music from this period, the structure of the “Wilhelmus” is rather complex. It is built on the principle of the Chiasmus [repeating in the reverse order of the same system]. The text is thus symmetrical, verses 1 and 15 have a similar meaning, like the verses 2 and 14, 3 and 13, etc., to verse 8, which is the core of the song: “O David, who resorted to them sought by tyranny king Saul. Even I walked away from the confusion”. These words are linked with the biblical David. Willem van Oranje as a righteous and merciful leader; against the tyrannical king Saul on the Spanish crown and also of Israel (as the “Promised Land”) with the Netherlands. 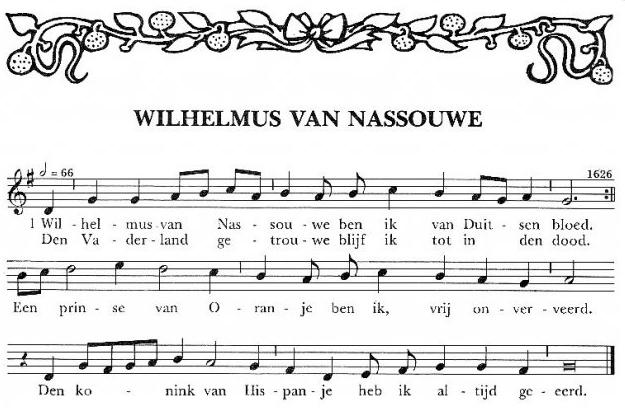 3* The birth of the “Wilhelmus” marks the beginning of the 80-year war, divided into two periods by a ceasefire (from 1609 to 1621, see the Dordtse Synode). The resumption of that war was characterized by songs like the victory of Bergen op Zoom (in 1622).

Wilhelmus today
The melody was adapted by Austrian composer Eduard Kremser around 1880 and was played at the inauguration (in 1898) by Queen Wilhelmina who appreciated that version very much. Thus it became popular with the Orange minded Dutch.
It is seen by most Dutch as “their” anthem not that of the government. So it has several versions. Even a German one, by the Germans those imposed in WWII. The latter was and is, of course, by most Dutch, vehemently rejected. In modern times, there is even a “disco” version.