After the (1945) liberation many children in the provinces of North- and South-Holland were taken away from their families to be placed with host families in the (agricultural) northern provinces. It happened so because children needed good care and food while devastated western provinces knew little luck. Actually the joy came only back when those children, healthy and strong again, returned at home.

In Holland could only be invested through hard work and much borrowing. In poverty, the cold winter was faced in fear. But luckily the coal miners in Limburg made overtime. This allowed each family in Holland to heat a (small) room. Much later old miners visited secondary schools in Holland to talk about work in the mines, how well it was paid and that  many young miners were needed there. (All Hollanders liked to go on holiday to Limburg). They also showed proudly a films about it.

The mines in use (dutch).

The Schoolboys were listening those movies very quietly, but their faces showed deep bewilderment. Blond boys, so accustomed to the fresh winds and wide horizons, could not believe their eyes when they saw those dark depresive mines. (Many miners came from Poland!).
A bit later in the famous 60s (Holland was rich and prosperous again) the mines were closed, Limburg was given a wonderful (new) university and governmental institutes (Statistics, etc.) and pension funds were moved from Holland to Limburg to compensate for employment.

To the name:
* Dutch miners have to sing to keep their lungs in good condition. There is still a very populair choir of (former) miners. It’s called Maastrichter Staar, pardon the Royal Choir Maastrichter Staar, of course!
* The story goes that, even at daytime, the stars were visible from deep in the mines (trought the schaft). So they took the name Staar (dialect).
* Maastricht, the capital of the province Limburg, has also a star in its coat of arms. 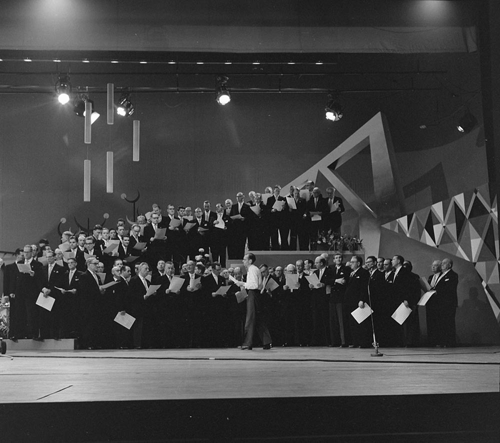 Even today, long after the closing of the last mine, this choir is still very populair in Holland:
25 jaar André Rieu (Guests: the Staar – the former miners in white jackets).