Perhaps a few people know the story of Neutral Moresnet – a small, existing only for 100 years (1816 – 1919) state bordering the Netherlands, Prussia, and since 1830 also Belgium. For Poles Moresnet has an interesting Polish clue – in 1908 it was proclaimed the State Esperanto “Amikejo” as Esperanto is an international language created by the Polish doctor (of Jewish origin) Ludwig Zamenhof.

Moresnet had borders: to the north (with a small point), the Netherlands, in the east; to Germany (Prussia) and in the south and in the west to Belgium. The country had four (!) official languages: German, French, Dutch and Esperanto. It had an area of 3.44 km2 and in 1816 it had a population density of 74.5 inhabitants / km2. In 1858 ten times that number!). It existed from 1816 until 1919 as a small neutral state. 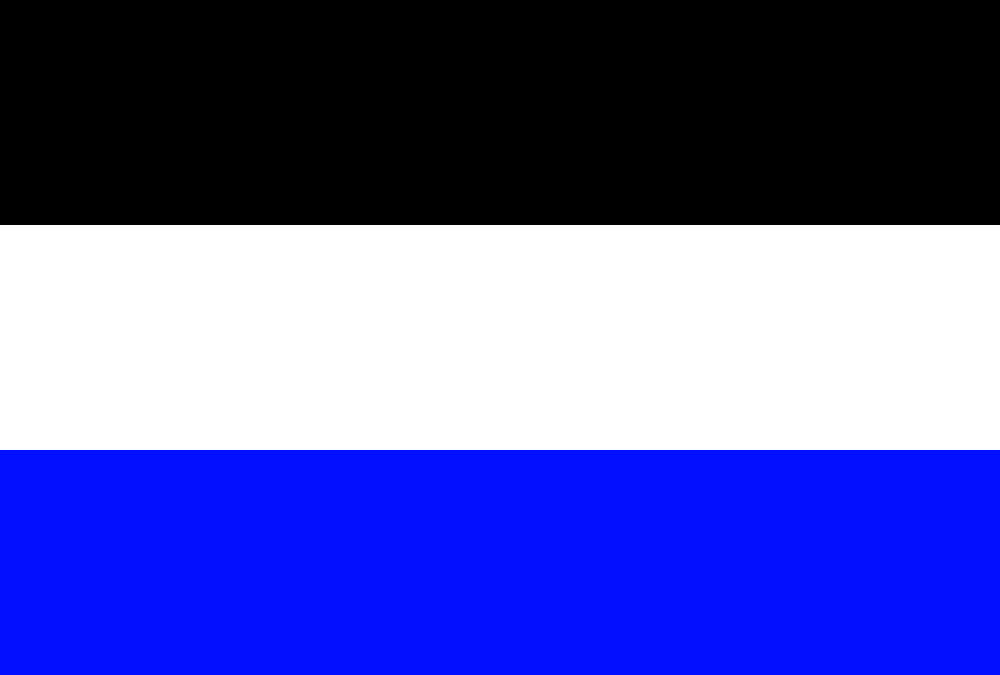 The origin of Neutral Moresnet
After Napoleon was defeated in 1815 the borders in Europe had to be redefined at the Congress of Vienna. For the Netherlands (Belgium did not exist at that time), it was all about the borders with Prussia (Germany also did not exist yet).

The area “Moresnet” was, in 1815, by the Congress of Vienna assigned to the Nether-lands.  However, by the determination of the cource of the boundery Prussia made a problem. Near the village of Kelmis, near Moresnet there was an important zinc mine wich Prussia demanded to control.

Neutral Moresnet was established by the Border Treaty of Aachen of 1816 (also called the “Treaty of the Borders”) because of  the need to set new borders in Europe after the Napoleon Bonaparte fall. Moresnet was divided into three parts by that.
See the map below:

In the Dutch village Vaals there was a point were four countries met:

a Netherlands, the lands over the Meuse (today the Provence of Limburg).

b The western part called Old Moresnet, went to the Netherlands (today Belgium).

c The area in between called La Calamine (the zinc mine) was Neutral Moresnet.

The gouvernement of Neutral Moresnet was a Dutch “Stadhouder”, a commissar from Prusia and the Mayor of Kelmis as the head of state. By the separation of Belgium (the London Convention, 1839) from the Netherlands, the Dutch (western) part of Moresnet became Belgian. From that moment on the Stadhouder was replaced by a Belgian commissar. (But the Netherlands never formally gave up her rights on this area).
Note 1.
The village of (Old-) Moresnet is located in present-day Belgium. The Neu-Moresnet village lies in Prussia (Germany). Both, therefor, outside the neutral country Moresnet!
Note 2.
The little central area, called “Neutral Moresnet”, thus became a tiny province on the old-fashioned way (i.e. as an independed state). The board was formed by a Prussian Commissioner, and a Dutch “stadhouder” and the Mayor of Kelmis as head of state.
In the years 1869-1870 all wooden borderposts, wich had to be renewed very often, were replaced by stone piles. The stone piles along the Belgian border were numbered from I to XXX and those along  the Pussian border XXXI to LX. Most of them are still in position.

“Four countrypoint” in the village of Vaals (Netherlands) is today a three countrypoint.
.
Defence and militairy service
According to article 17 of the treaty of borders should neither country, Netherlands (later Belgium) nor Prussia (later Germany) occupy Neutral Moresnet. So the country had no militairy needs and had no army. However, this did not mean there was no conscription.
Accoording to th agreements, the auditors had concluded that inhabitants of Neutral Moresnet, as soon as they reached the age of 20, had to indicate at the townhall whether they want to accomplish their duty in Prussian- or in the Dutch army. The Prussian army, how ever was not populair because that service lasted longer than the Dutch one.
In 1816 only 256 people lived in the disputed area. But by the growth of the zinc mine and thanks to the booming economy, the population increased steadily. In 1830 there were already about 500 inhabitants and in 1858 even 2572. Of those 2572 inhabitants 700 were real “Neutrals” (descendants of the original population), 850 Belgians, 800 Prussians, 200 Dutch and some 20 (whether or not permanent) immigrants from other countries.
. 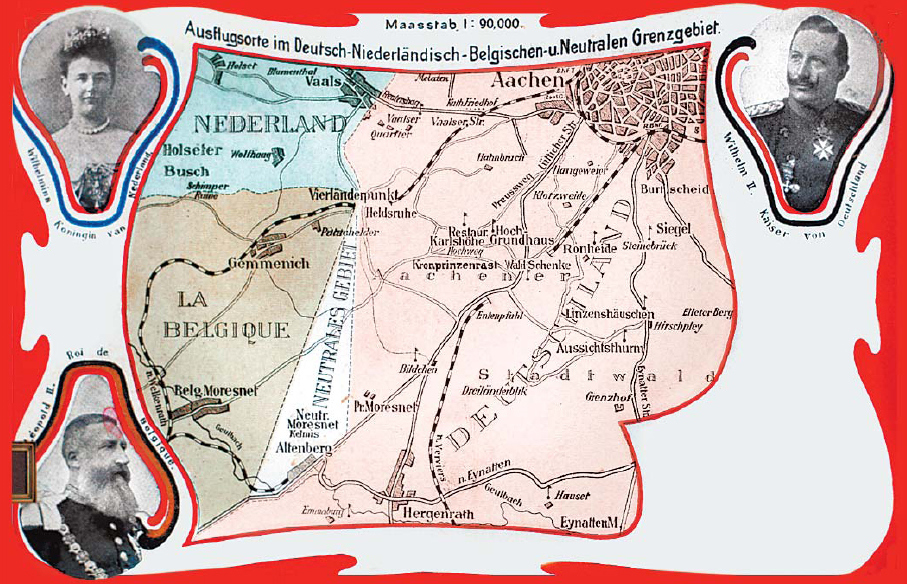 The zincmine (Altenberg/Vieille Montagne)
It was the zinc mine from wich the neutral territory of Moresnet derived its right to exist. The zinc mine concession was given (in 1805) to the Liege chemist: Jean-Jacques Daniel Dony, was of such importance that article 31 of the Aachen Border Treaty states that:

“It is further expressly agreed that a change in the authority or governemment in no way will harm the rights of Mr. Dony and Cie, concerning the exploitation of the mine so that his conceession will remain intact and continue the benefits and privileges original granted to her will continue to enjoy. The former burdens remain on the concession application, including an obligation to deliver calamine (zinc ore) to the zinc mills of both contracting parties at a price specified in the deed of concession.”

Mr. Dony, a briljant chemist, got the zinc mine concession, among other reasons, becouse of his invention of the zinc oven. With his “Liège” zinc ore could be converted into rollable metal. But Dony might be a briljant chemist, business he handled less well. Already in 1813 he had to accept his main creditor as a co-partner the banker Hector Chaulet. In the same year 3/4 of Dony’s Industrial properties were handed over to François Mosselman and finally Mr. Dony went bankrupt.

So Mr Mosselman acquired all other shares of the zinc mine and had complete control over it. Thanks to the heirs of Mosselman, who founded in 1837 the “Société des Mines et Fonderies de Zinc de la Vieille Montagne” and made the mine booming until it was exhausted in 1885.was exhausted in 1885.

It is well known that the compagny pursued a very social policy towards the population.
Ensuring proper medical facilities and favorable rate for loans are examples of it.

An important figure in the history of Moresnet was Dr Wilhelm Molly, a doctor and a big  Esperanto language enthusiast – and here appears an interesting Polish clue. Molly was born in Prussia but came to Moresnet for 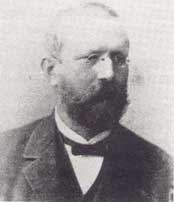 medical practice (he was the main medical doctor in the zinc mine). Medicine was not the only object of his interest however, because he founded soon a travel agency –- Kelmiser Verkehrs Anstalt. By joining the Société de la Vieille Montagne Molly prompted Moresnet for printing its own post stamps (following the practice of some Prussian towns). This was to emphasize the indepen-dence of Moresnet, but was not accepted by commissioners, who banned the practice (they related to the old French law which guaranteed state monopoly to printing stamps). On the photo: Wilhelm Molly.

Molly did not stop, however, on the stamps. With the help of his Esperanto 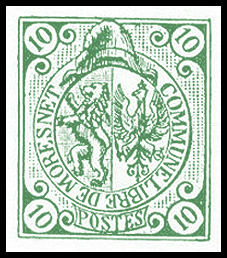 friends (among them the French professor Gustave Roy) he decided to turn Moresnet into the Esperanto State “Amikejo” (amikejo = a place of great friendship). The solemn proclamation of the Free State of Esperanto took place in 1908, and during the ceremony miners’ orchestra played the “March Amikejo”, which was to become the Moresnet anthem. After this event the international press announced creation of anEsperanto state. The photo: Moresnet stamp.

Unfortunately, the history of neutral Moresnet was coming to an end, which was associated with depletion in 1885 zinc ore deposits, as well as the Prussia attempts of taking control over the state (one of the method was cutting off  electricity and telephone in 1900). Moresnet people, aware of the end of neutrality, preferred to be incorporated into Belgium. Neutrality ended with the outbreak of World War I and the German occupation. Under the Treaty of Versailles of 1919. Moresnet became part of Belgium.

Although during the World War II the area was annexed by the Third Reich, in 1944 it returned again to Belgium. At the present the region is a part of the German-speaking municipality Kelmis in Belgium.

The history of neutral Moresnet is reminded by some small leftovers exhibited in a small museum (Neu-Moresnet, Maxstrasse 9, 4721), and the still existing boundary markers – to our times there survived 50 (of 60 in total).