Psalms, although are usually connected with Jews and their ancient prayers, played a strong role in the history of the Netherlands. At least they influenced the Dutch language.

Moses wrote the first psalm, Psalm 90, more than 3.000 years ago. It is believed that David composed about 70 and also the descendants of Korach took a number on their behalf. Finally, even Asaph, Heman and Ethan, conductors of the priests’ choirs in the David time, made their part. Around 2.000 years ago the Book of Psalms, as we know it today, was ready. Since then the Jews sing from it every day. That kind of singing, with a singing voice, we would call “reciting” today. Psalms were transmitted orally from generation to generation. Two examples:  psalm 23 and psalm 145 (in Hebrew). On the picture: Moses.

The Book of Psalms in the Hebrew Bible consists of five separate books (i.e.: the Old Testament actually consists of 70 books instead of 66). Each “sub – book” ends with a praise. The layout is as following:

Some psalms together form a whole. So the psalms 113 up until 118 form together the “The Hymn” and “The Great Hallel” is the name for the Psalms 120 to 135. Psalm 9 and 10 are actually one psalm, the same applies to psalm 42 and 43. In three psalms (Psalm 25 , 34 and 37 ) the initial letters of each text form the Hebrew alphabet and Psalm 119 is even every time a group of eight consecutive texts with the same letter. 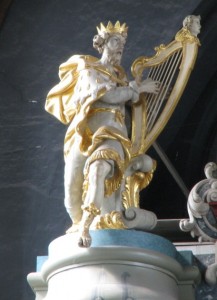 The New Testament speaks several times about the “singing” of psalms (1 Cor.14 : 26 , Eph. 5:19 Col. 3 : 16 and Jam.5 : 13 ). To the psalms were twice “hymns and spiritual songs” added. This mainly served for singing during meetings, but they were sung also outside! Paul and Silas sang even in prison, with tied feet and a back full of wounds from the scourging (Acts 16:22 – 25). Paul and his followers also taught singing psalms the members of the newly founded communities outside Israel – in the Roman Empire. So the Hebrew texts had to be translated into Latin. This way the oldest church music was created there-fore that seems still some of the old music of the synagogue. On the picture: David.
Examples: psalm 23 (Hebrew); psalm 23 (Aramaic); psalm 23 (Arabian = Orthodox); psalm 23 (Latin). 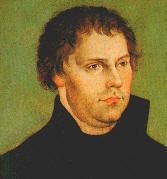 Thus, the gospel spread throughout the West. But, because it is Latin, for the “common man” it was too difficult to sing, so there were specially trained choirs to sing the psalms during church services. So the people of all cultures and different languages, as the psalms belong in worship, could not understand words and probably they even could not sing them.  It was Martin Luther who translated psalms into the local language  and also composed new melodies. Psalm 46 “A Mighty Fortress is our God” is an example. In 1529 he published a German Psalter. (Around the same time Martin Bucer printed in Strasbourg also a prayer book with psalms). Example: psalm 23 (M. Luther). On the picture: Martin Luther.

John Calvin was deeply imbued with the great value of praising God by singing psalms in the local language what gave people necessary mental power. He found the singing one of the most important things in the Church, because, as he said: “The text becomes more powerful by it.” So he treated psalms in Geneva very seriously. He asked talented musicians to compose “exalted” melodies to those already translated (into French) ones. The idea was: whenever possible to have (unlike Gregorian) one note per syllable, so the municipalities could learn to sing them without a trouble. The process of composing melodies to those 150 psalms lasted since 1539 to 1562 (as they now stand in the Psalter, but with a French text). Calvin then let the whole Psalter – all the verses! – be sung twice a year, so about 20 verses per serves! They sang all the verses of a psalm after the other. On the picture: John Calvin. As an example: psalm 23 by J. P. Sweelink.

The Netherlands
Meanwhile in the Netherlands a nobleman Willem van Zuylen van Nijevelt had the 150 psalms to “verses in rhyme” retranslated and brought on existing melodies of the country folk songs. They called his book (which was published in 1540) the Souterliedekens (sweet songs). It was yet not “church” but “folk” music, but the texts of them went back to the Bible. This music still relates to the then Dutch “classical” music tradition.
Example: psalm 31. 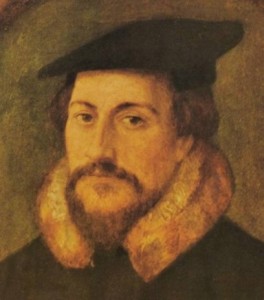 Thanks to Peter Datheen the Protestants in the Low Countries could later, in 1566, also sing the psalms in their own language (and on their own tunes), because he translated the French Book of Psalms into Dutch. This way were these psalms sung during the 80-year war. The music to this rhyming deviates from the then current Dutch “classical music” sharply (psalms must be easy for performing by ordinary church people). On the picture: Peter Datheen. Example psalm 42.

This rhyming is still in use in some 30 churches.

The famous “States rhyming” (or “old rhyming” of 1773) came two hundred years later. During the French period there was some harsh repression and after that a solid church struggle. Then the psalms gave to many people courage and consolation. This so called old rhyming, is still used in many conservative churches.

Also a “Songbook for churches” with a new rhyming came, about two hundred years later and it is dear to many. It has a slow growing following and is now used in most Protestant churches.

Text Comparison of some rhymings.