One of the most shocking things for a Pole in Holland is the Dutch cemetery. There is no place for sumptuous gravestones, expensive marbles and plastic flowers or wreaths, which Poles love to decorate graves. A big surprise are secular decorations, what in Poland would be unthinkable.

This is not the only thing that distinguishes Dutch funeral customs, otherwise some worth popularization. There is a wide possibility of secular funeral ceremonies what is not common in Poland because of the lack of the infrastructure like funeral parlours, what often forces families of non-believers formally belonging to the Church to arrange a catholic funeral. 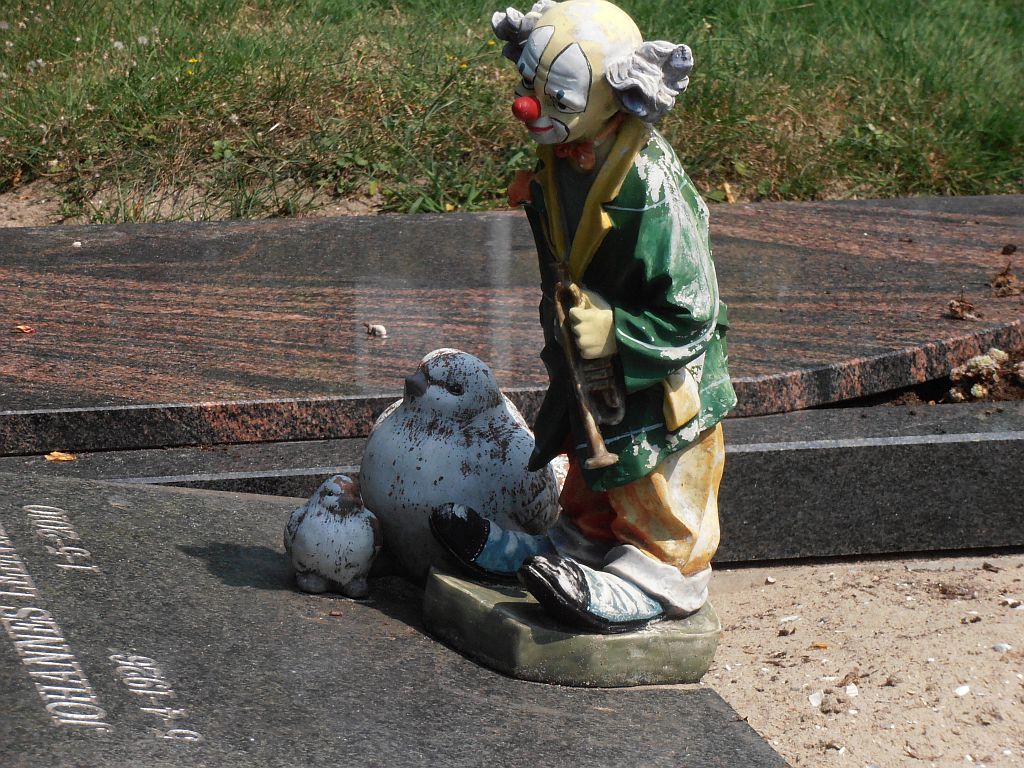 As in every country, also in the Netherlands are various traditions, ceremonies and superstitions. Since it is a very religiously diverse country (Catholic south, Calvinist north, agnostic west) and cultural (Holland, Zeeland, Frisia, Brabant etc.), these habits depend on the region. The following examples are only a modest presentation.

Many of those habits have already became a history, although in some rural communities some are still practiced. On the other hand, more and more people dye in hospitals, so there is no need to cultivate those traditions that have been designed to protect the home and its people from the effects of “evil.”  And these were the concerns of the Dutch in the old days, prompting them to wake up every sleeping person in the house immediately after the death of its inhabitant. It is known that sleeping souls are defenseless, so the dead man could pull them behind him. For the same reason eyes of the deceased were closed and coins were placed on them – so that the dead man “staring” at someone could not drag one or more of his kinfolk along with him. As soon as someone closed his eyes forever, windows and outdoors were wide opened so the soul of the deceased could freely leave the house. After a few hours, they were shut down carefully, in case the soul wanted to return. 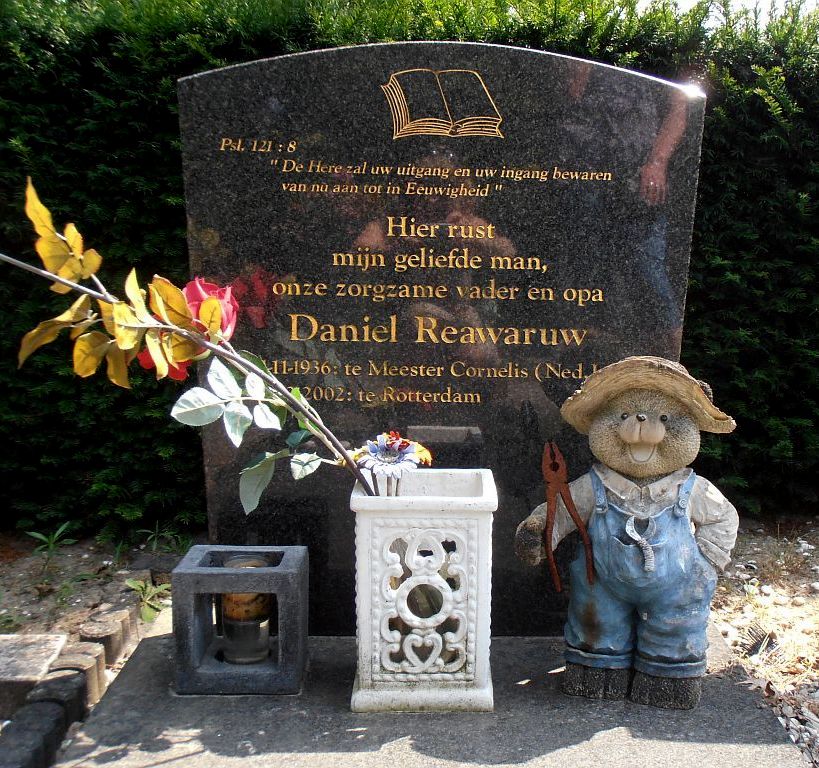 The sign of death was covering the windows with white sheets, still practiced in the calvinist island of Urk – the reason was to protect the house of the negative impact of the soul of the deceased. Sheets were removed only after the funeral. Another form of this custom was careful sliding curtains in the windows. Mirrors were covered or turned to the wall (it was not just a Dutch tradition however) so that the soul would not steal the image of the alive, which could have led to their premature death. The coffin had to be guarded all the time, necessarily with a lighted lamp, to scare away the evil. It was not allowed to speak loudly; the clanging clocks were stopped so that the deceased could not realize that without him a normal life was going on.

Covering windows, decorating them with appropriate wooden signs or crosses, was just one of the forms of death information. On the island of Urk, the task of informing the family belonged to the reverend. As the clergyman walked the streets talks stopped and people in the houses watched with fear if the reverend was going towards them. After he finally passed people breathe with deep relief, and so was the origin of the comment on the silence of the conversationalists: “the priest passes.” The role of a death messenger was also assigned to some family member or a neighbor. Dressed in a triangular feathered hat, he wandered with the sad news from home to home, where was treated with food and alcohol. 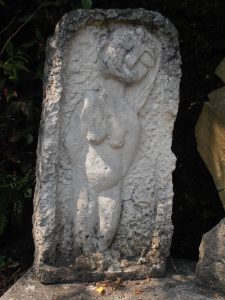 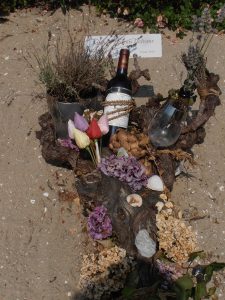 The funeral traditions associated with women include the so-called doodshemd or lijkhemd – a death shirt. It was not a shirt sewn specifically for the coffin, but the shirt the brides put on her wedding night. Used only once, washed, waited in the closet for the death of the woman as she was dressed in it to the coffin. The bride had to embroil her initials with one needle and one thread. After her death the needle was broken in half and put into a coffin or burnt in fire. The clothes and clothing of the deceased had to be washed away immediately, but it was not allowed to another use until after a month. Special regulations defined the form and period of mourning. Widows and widowers had to dress in black – formerly for the rest of their lives, in later times only for seven years. Women could only wear strictly defined jewelry. It was a superstition that young people who fell in love in the period of mourning had no chance for a happy marriage. 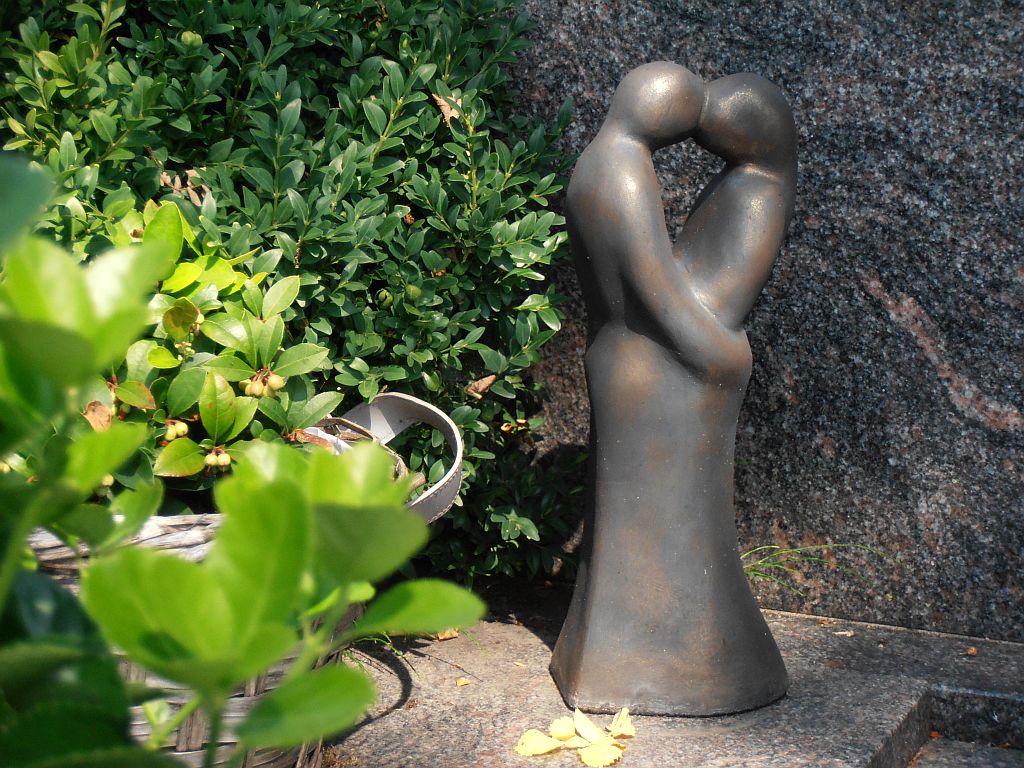 After leaving the house by the funeral procession the door through which the coffin was carried out had to be open until the mourners returned. In many houses in the rural country there were doors built solely for this purpose, the same applies to churches. The coffin was carried by the neighbors – when the dead was a man, they carried it on the shoulders, in the case of woman it was carried in their hands. The dead had to be buried as fast as possible. Up until 1990, the Dutch traffic law gave right-of -way to the funeral procession. The Frisian habit, which persisted until today, was a triple encirclement of the church with the coffin to prevent return of the soul of the deceased.

Around death – the present

The most commonly used form of notification of death for family and a friend (if not using mail or phone) is sending them a special black-rimmed card containing personal details of the deceased (name, date and place of birth) and death and funeral information (date and place of death, date and location of the funeral). It is a Dutch specialty to place appropriate poetic quotes or very personal references on painful losses. The addressee sends back his condolences or does it personally in the deceased’s home (if the family does not object to such visits).

Funeral ceremonies usually take place in special funeral parlours, which is especially related to the great popularity of cremation, chosen by about 60% of Dutch citizens. This is not surprising given the very high cost of paying for the cemetery. At the most expensive cemetery in the Netherlands, Esserveld in Groningen, it is 7 000 euros for 30 years, but at the cheapest – Littenseradiel in Friesland – only 456 euros for 20 years. Since 1991 the urn can be stored at home, and it is also possible to disperse the ashes. It is rather costly however as the land owners, such as the municipality, may ask for up to 1 000 euros for it! Interesting note: ashes can be taken from the crematorium only after one month – until then it must be available for the police (in a case of murder). 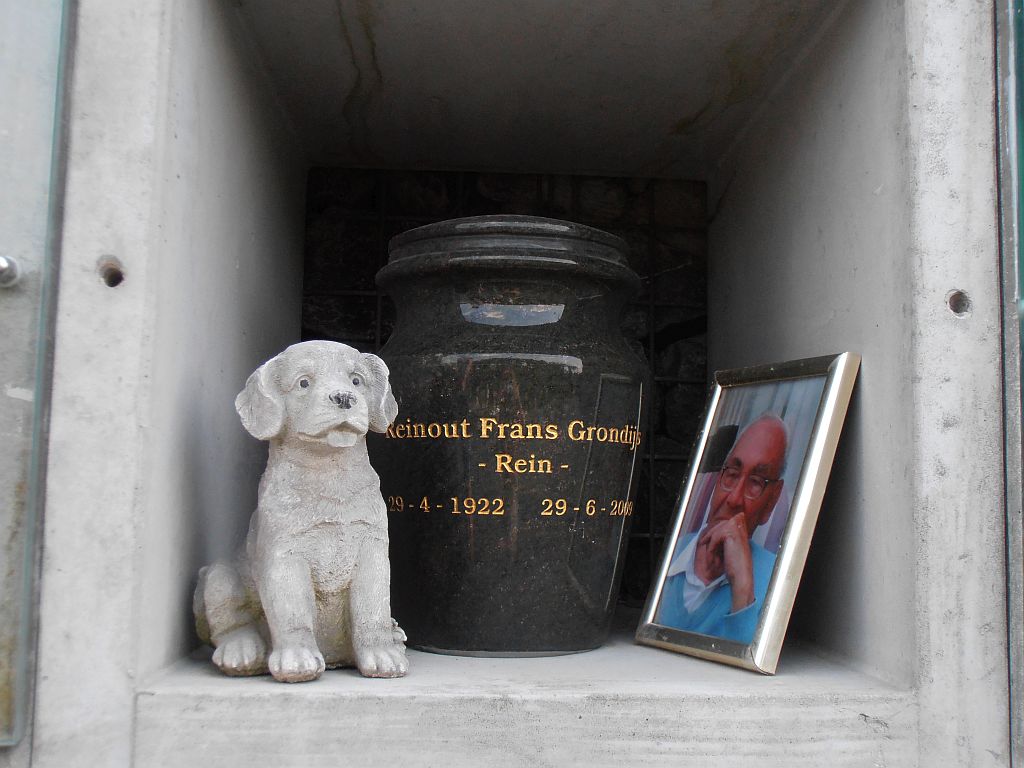 The mourning ceremony at the crematorium is rather modest. Guests listen to relevant speeches (the masters of ceremonies are very often students, it is a popular form of earning money) and music (the most popular funeral songs are: “Time to Say Goodbye” by Andrea Bocelli & Sarah Brightman, Eric Clapton’s “Tears In Heaven” and “Afscheid Nemen Bestaat Niet” by Marco Borsato). And when the casket disappears in the burning chamber the mourners are treated with a coffietafel – a cup of coffee and a sandwich or cake (alcohol is not welcome). It all takes less than an hour. Recently the custom of resignation of the ceremony has appeared, allowing families to save about 1200 euros. (The average cost of the whole funeral can be up to 5 000 euro).

Interesting note: In 2002, the poet, photographer and musician Frank Starik formed the so-called “Poule des doods” – an association of poets who arrange and deliver funeral poems for those who have died alone and have no mourners at all.

Here is a description of a secular funeral ceremony, written by the reader of nasza-holandia.pl

[…] the entire ceremony took place on the estate of the deceased and was conducted by a woman, as if the company was rented, and not by a priest … We all sat under a big tent, the melancholic music was playing in the background, later the lady spoke, followed by the family members of the deceased. I was very surprised by such a funeral.

The attitude of the Dutch people to graves and cemeteries is largely attributed to their Calvinist way of cultivating the memory of the dead. Their remains are no longer significant; what counts is the presence in consciousness, memories, remnants or photographs. Therefore, for financial reasons they don’t mind clearing the graves after 10-20 years of renting and transfer remains of the relatives to the common grave! 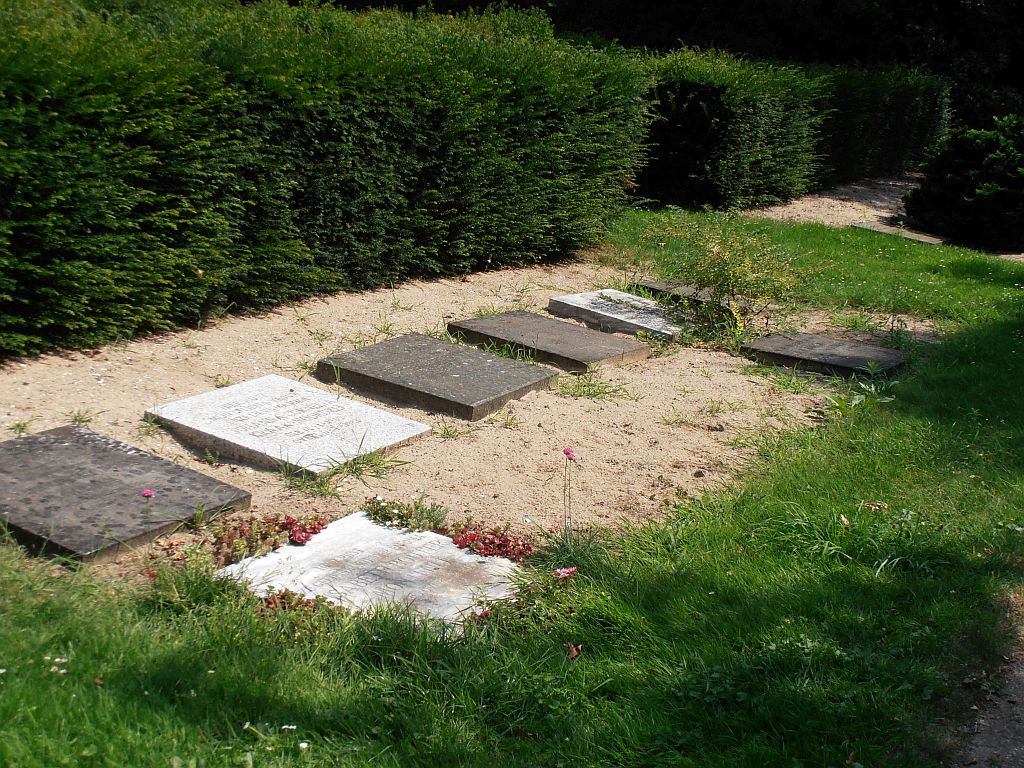 In the Dutch cemeteries, the diversity of the society in terms of their approach to religion is very visible. Catholics bury their deceased in traditional tombs, the same like in Poland. Calvinist ones are characterized by great simplicity and rigidity. 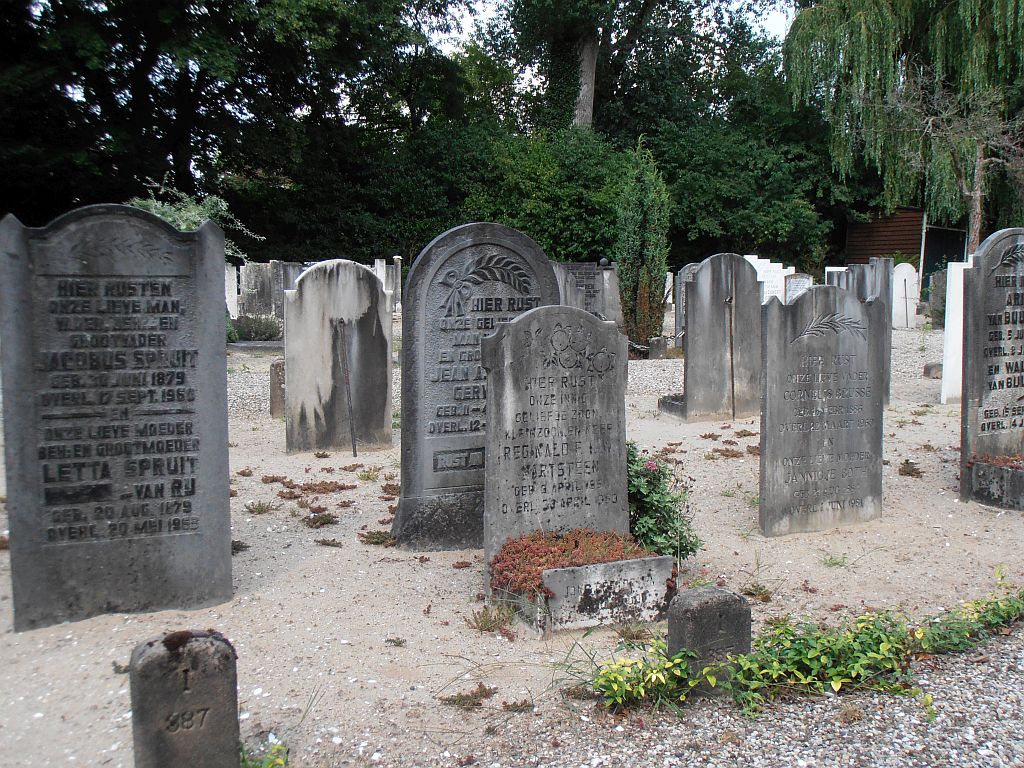 Secular graves show big fantasy and variety in the form of commemorating the dead. Children’s graves are touching because of toys or shoes. On the graves of adults figures of angels are replaced with the stuff indicating hobbies or passions of the deceased, such as plying cards, a bottle of wine or a statue of a clown. 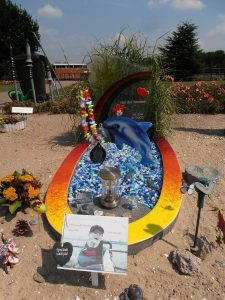 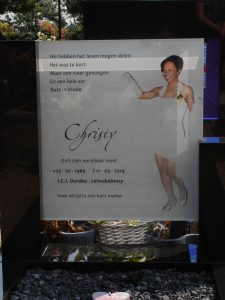 Maybe it’s strange, but thanks to that the people are no longer anonymous and they seem to have not completely left the Earth… 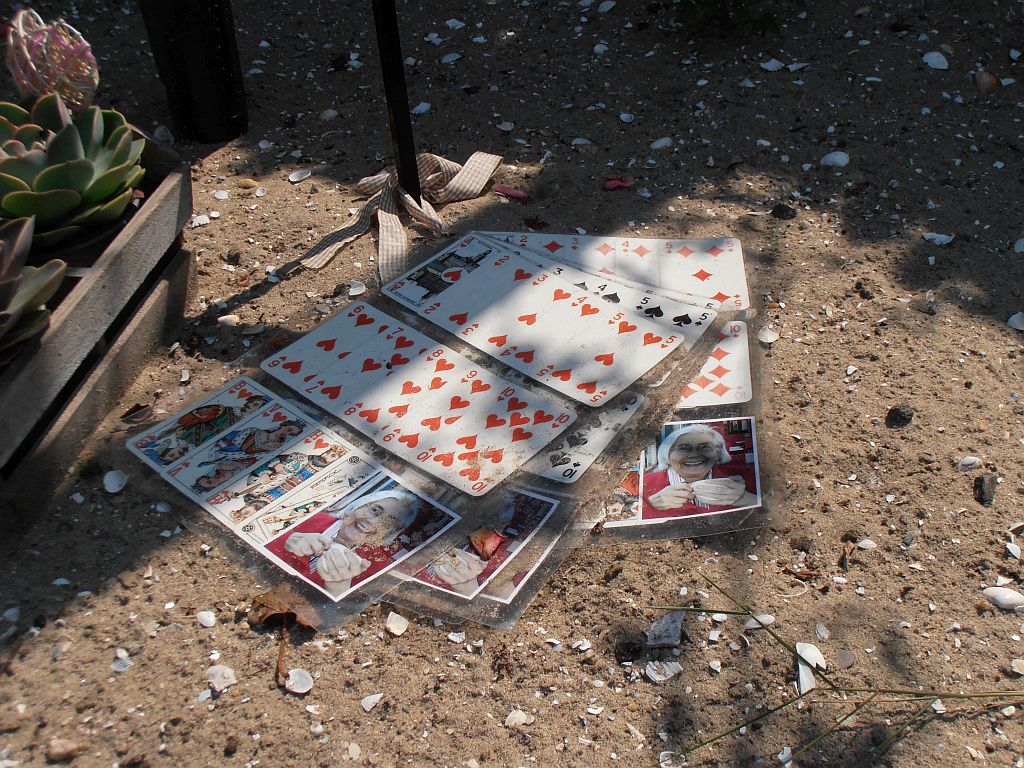 For the Polish people, used to Polish graves full of plastic flowers and candles and often very expensive, the otherness of Dutch graves is a bit surprising. On the other side – maybe there is more common sense in it. If someone is worth memory, it will survive better than his grave. Otherwise he should give place to the successors. To pass away is the human fate… 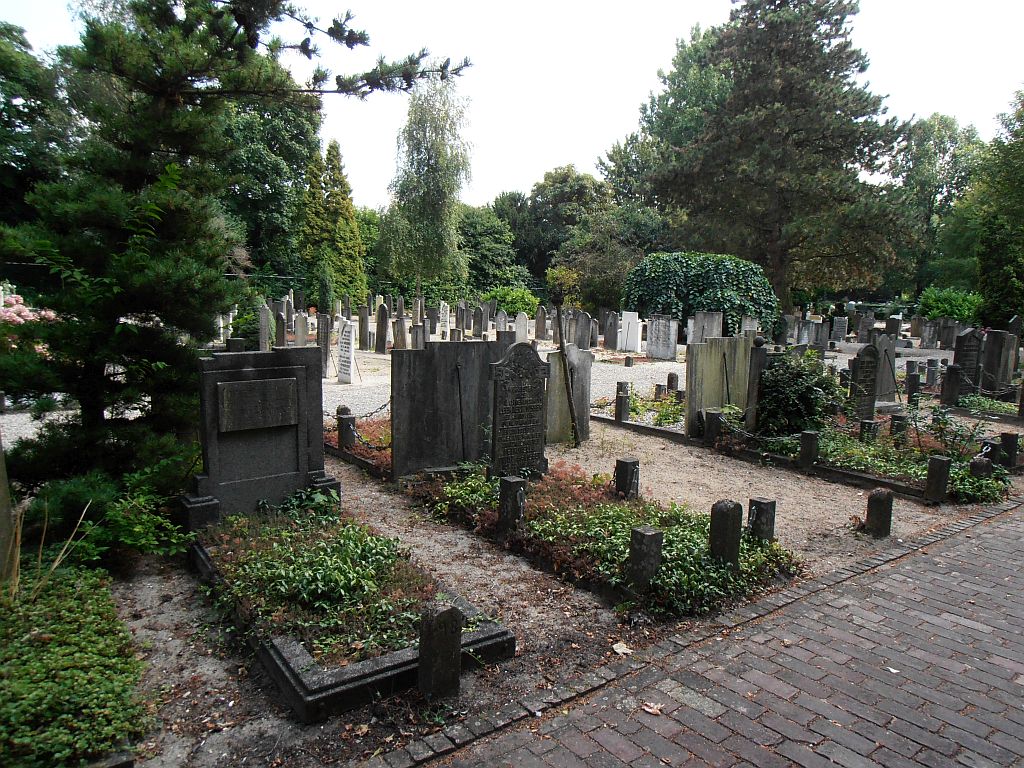 Pictures were made by the author at the cemetery Boveneind (old name) / IJsseldijk … in Krimpen an den IJssel. 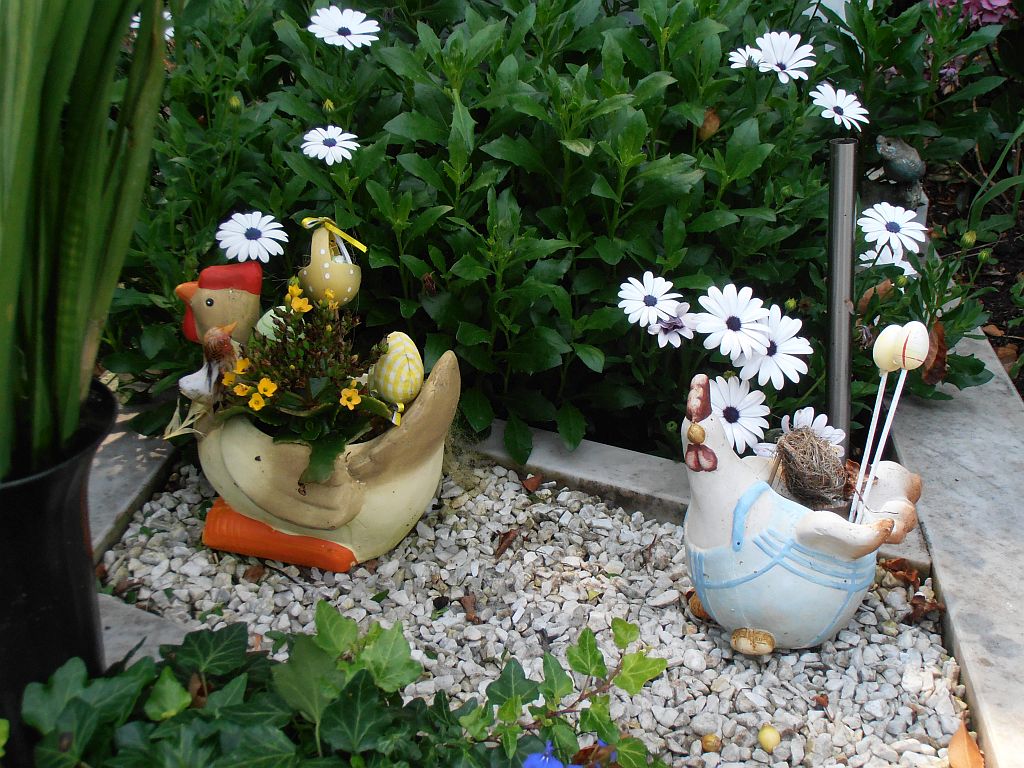 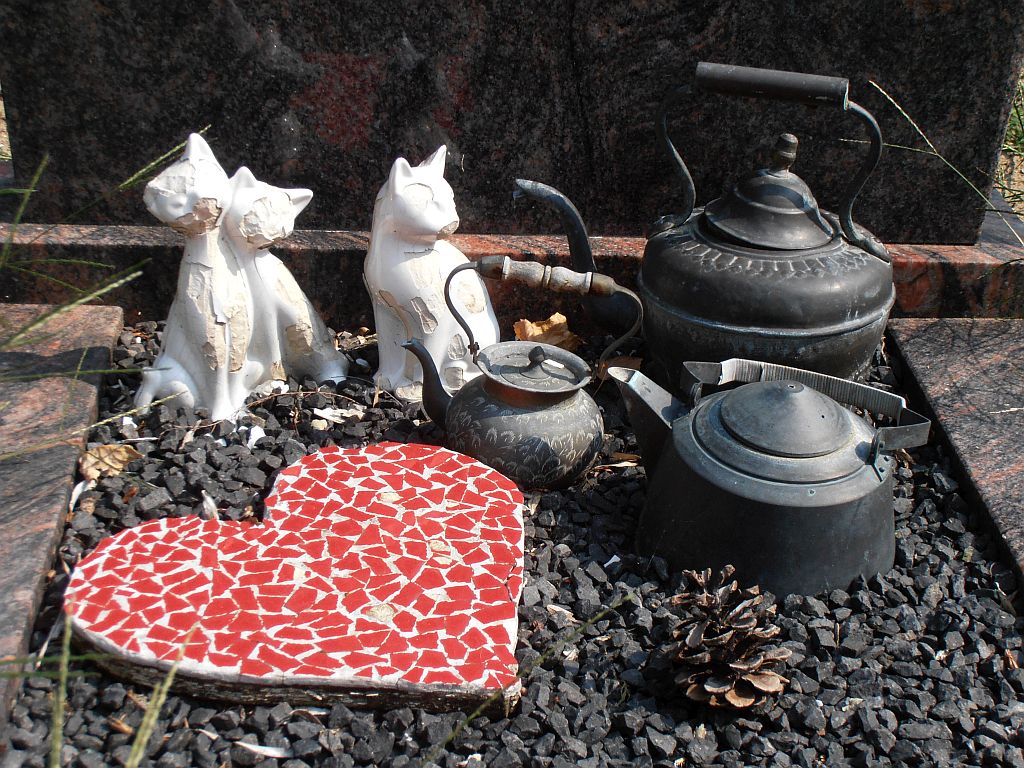 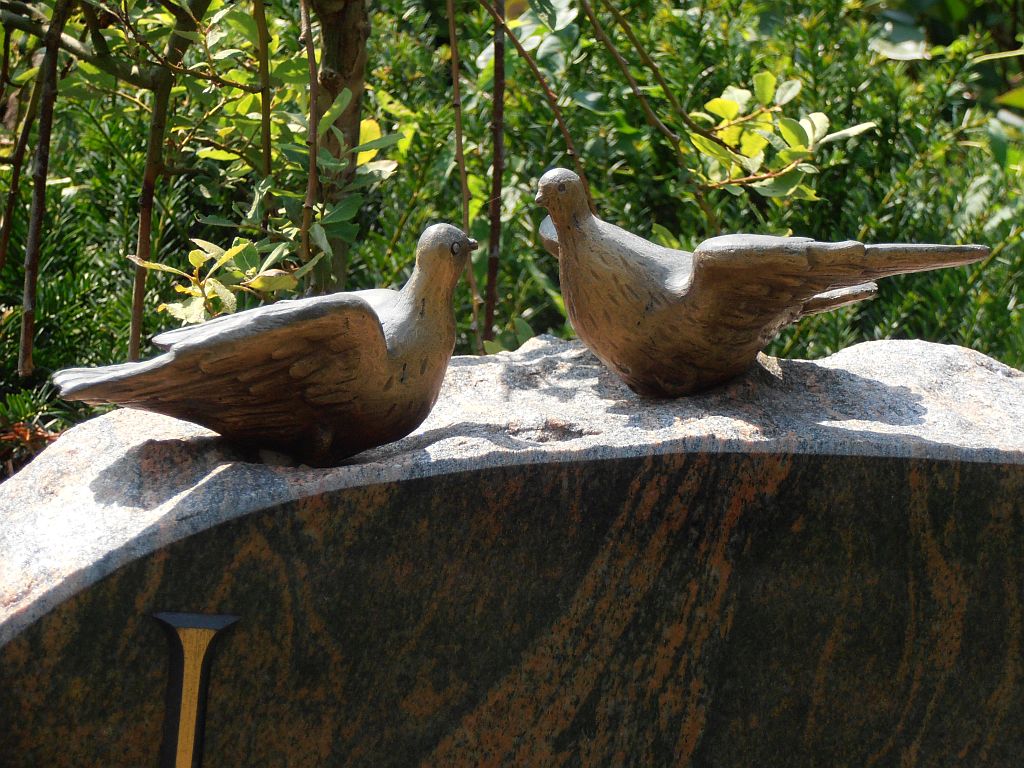 and The Old Jewish necropolis in Wrocław