In 2014 it is rather difficult for a Pole to write something insightful about the Netherlands. Everyone who went there with a travel office saw the country in a mandatory nutshell: Amsterdam and its canals, Rijksmuseum, The Hague, windmills and a milk farm where it was necessary to purchase local cheese and clogs.

He shook his head over Dutch way of life, which manifested itself with not-obscured windows; expressed his delight at the beauty of well-maintained gardens or expressed moral disapproval of window prostitution in the famous “Red Light District” in Amsterdam (read also: Sex in the City) – probably secretly dreaming of using services of scantily-clad beauties. Since many Poles live or work there, there are many descriptions of the Netherlands on the Internet. Unfortunately there are also some compatriots, who while working there, do not see any need to know if only a part of this great cultural richness offered by this small country.

And this is for me the biggest phenomenon of the land of canals, windmills 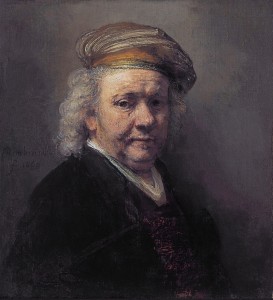 and tulips. How is it that having no more but 2 million inhabitants at the age of its greatest splendor (17th century), the Netherlands had so many great painters, while in the multimillion and multicultural Polish kingdom no Rembrandt (on the picture), Vermeer of Delft or Jan Steen was born and the royal court had to hire artists from the Netherlands (read: Vasa dynasty portraitists). Not mentioning countless reasonable eminent scholars like Erasmus from Rotterdam, Christiaan Huygens, Hugo de Groot, Anthonie Leeuwenhoek and so many others…

My next personal amazement is associated with huge overseas expansiveness of the Dutch, which meant that – whether we like it or not – they cut out for themselves quite tasty pieces of the world and with that small population of only few millions, they shipped overseas whole armada’s of beautiful sailing ships. (More on this in Dutch colonialism). 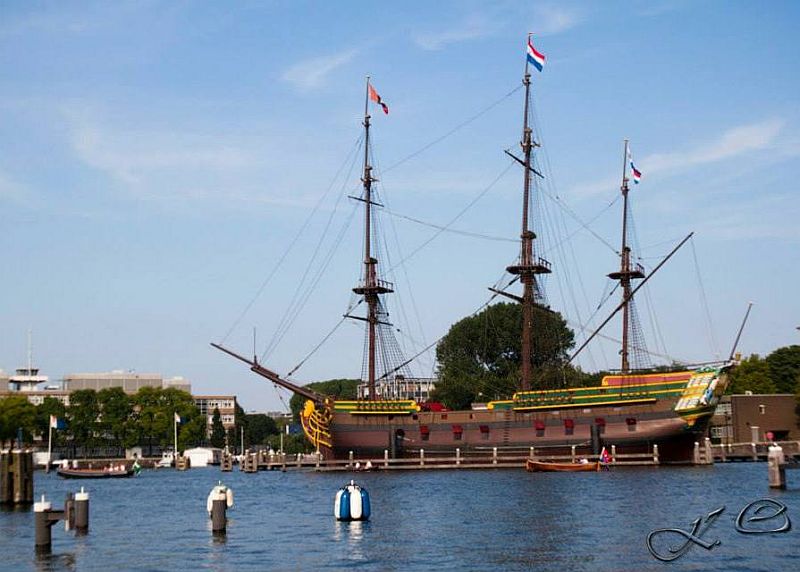 A replica of the sailing vessel “Amsterdam”

And one more important thing for me: the famous Delta dams, which are the result not only of an engineering genius, but alsOosterscheldekeringo a huge physical effort of this nation. Everyone 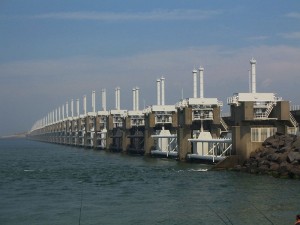 who had the opportunity to see Bert Haanstra documentary movies (“En de zee was niet meer”, or “Dijkbouw”), knows what I mean. Who saw those solemn moments of cutting off the North Sea by series of floating caissons must go to Zeeland, where the Delta Plan was realized. And he will  look with different eyes at the old fishing town of Veere, of wich the harbor no longer serves its fishing boats, they are replaced by elegant sailing boats. In the picture above: Oosterschelderkering. 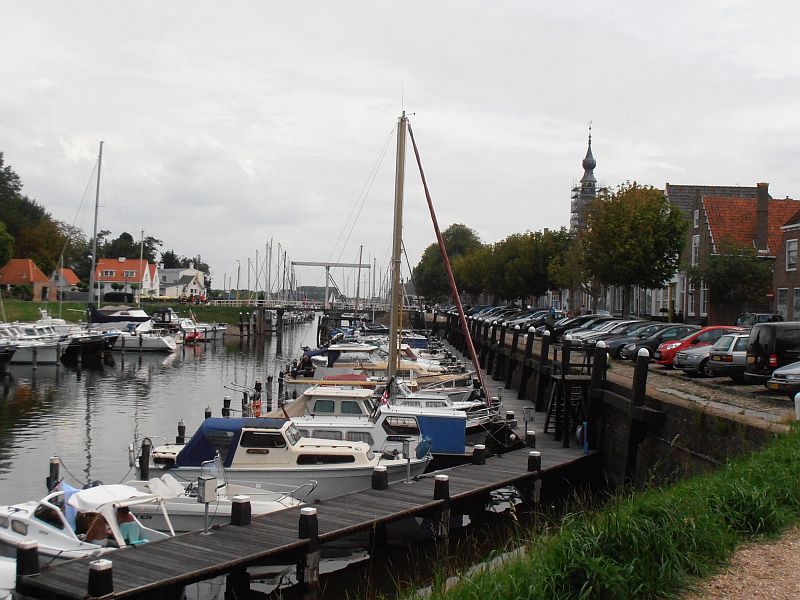 (See also: Forever and ever water). 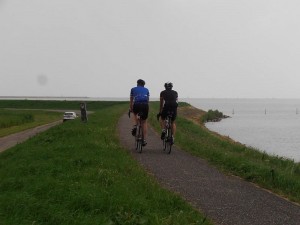 must also inspire some reflection. They were dug out manually a thousand years ago and the excavated ground, being carried out by polder people without any carriages, was used to build the dijkes (existing until today), that are so very characteristic of the Dutch landscape.

In the photo: On the dijk…

Dutch polders… For inhabitants of the country endowed with the very charming Carpathians and Sudety mountains and the hilly lake districts, their flat monotony may initially seem a bit tedious. 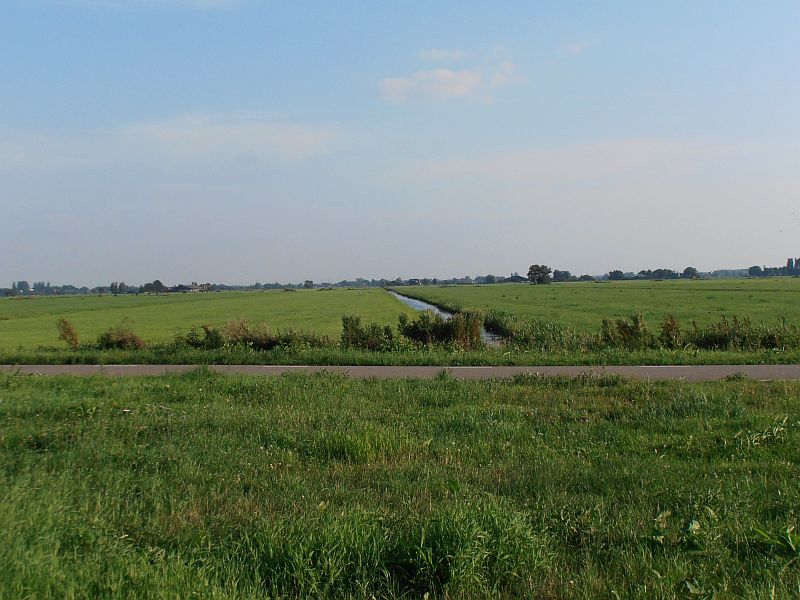 Krimpenerwaard, the oldest polder in the Netherlands

But after some time the vast peaceful pastures, especially in the evening, one will find something soothing in them. Not much has changed there since 1932, when the Czech writer Karel Čapek in his “Letters from Holland”* described the specificity of these sites:

“It is not until the approach of evening that a man comes sailing up in a wherry, sits down on a footstool and milks the stately cows. In the west the sky takes on a golden tinge, somewhere in the distance a steamer 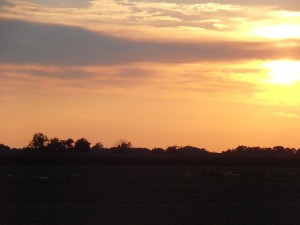 hoots, and that is all; no herdsman cooees, there is no tinkle of bells from the cows returning to their byres, and even the man on the footstool is completely tongue-tied. A boat slips quietly along the canal laden with churns of milk; a regular convoy of lorries dashes along the highroad laden with churns of milk; and trains puff towards the towns laden with churns of milk. And when it is over, there is a complete stillness; no cur yelping, no cow mooing in the byre, no horse knocking its hoof against the partition of its crib, nothing; only somewhere on the horizon beyond the dark and mute polders of sleeping herds the lighthouses silently rummage in the darkness with the feelers of their rays. That is the real Holland.”

And something of this quiet, rural Netherlands has remained, though obviously cows are not milked manually anymore, and the whistle of steamships has been replaced by the sough of cars flitting by quietly on the neighboring motorways. 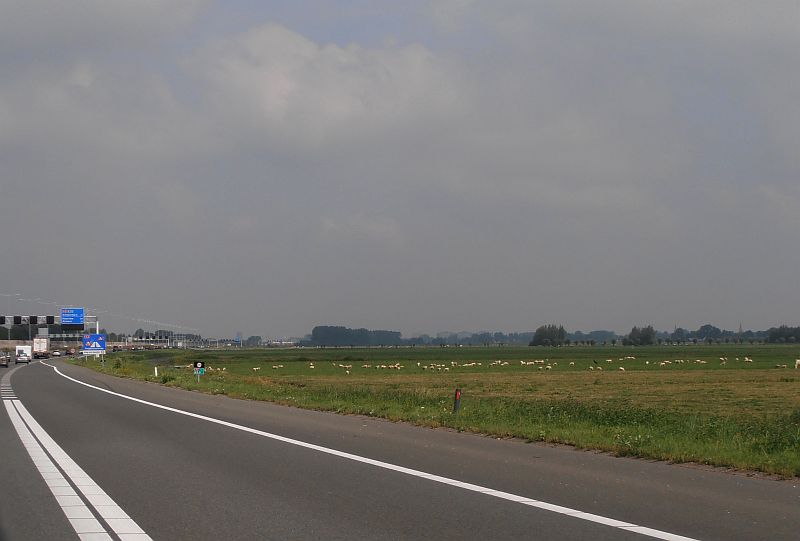 I really can understand the love of the people born here to those green places, chopped by regular network of canals and roads that extend as far as the horizon.

Although there are far too many roads in the Netherlands! (Where do they wander with backpacks if they want to quit civilization?)

Dutch roads are perfect. Comfortable; road signs, especially those with speed limits, are minimized as Dutch drivers are responsible and trustworthy (outnumbered cameras help a bit!). It is very easy and quick to get from point A to point B. Well, sometimes too easy! A holiday travel around the country lacks the tas 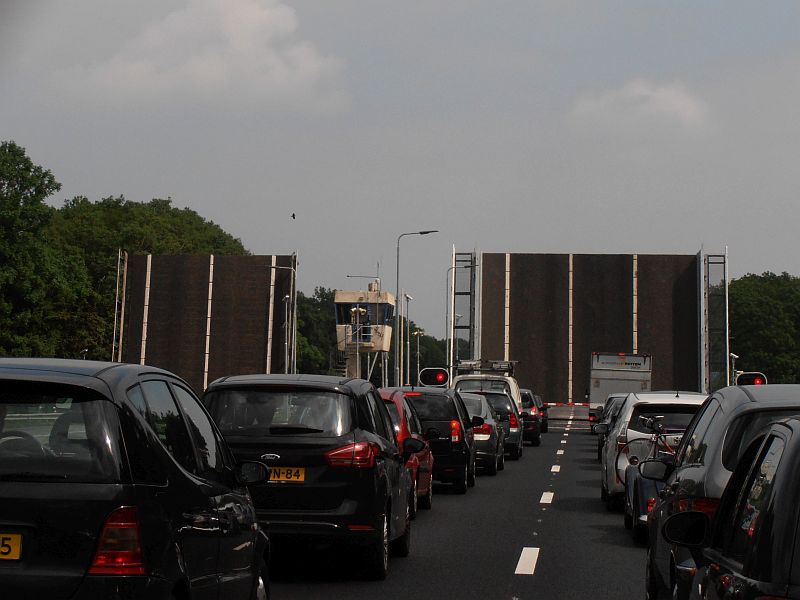 te of adventure, as in Poland, where one never knows if he goes directly the way  to his destination. But there is another attraction:
Dutch roads like to stand up suddenly to pass a sailing boat! Yet here one could complain about the lack of the roadside- eateries, that road restaurants and hotels which are so many in Poland. But those who turn to the side of the rural roads, will not regret it, because again they will see a piece of “real” Holland!

“Quiet village, cheerful village, who will be able to voice your glory?” This quote from the Polish Renaissance poet Jan Kochanowski fits perfectly to the Dutch village, which is so unique in the world. And again, nothing has changed since 1932, when Karel Čapek described the Dutch possessions this way:

“And the prettiest little gardens in the world are those of the Dutch cottages; quite tiny, as fresh as fresh can be from the frequent showers, teeming with silvery, golden and purple leaves, bestrewn with a bounty of blossoms (…)”

Whoever strays to such, let say, Bergambacht (on the picture below), may have trouble believing that this is actually a village, not a luxury resort. 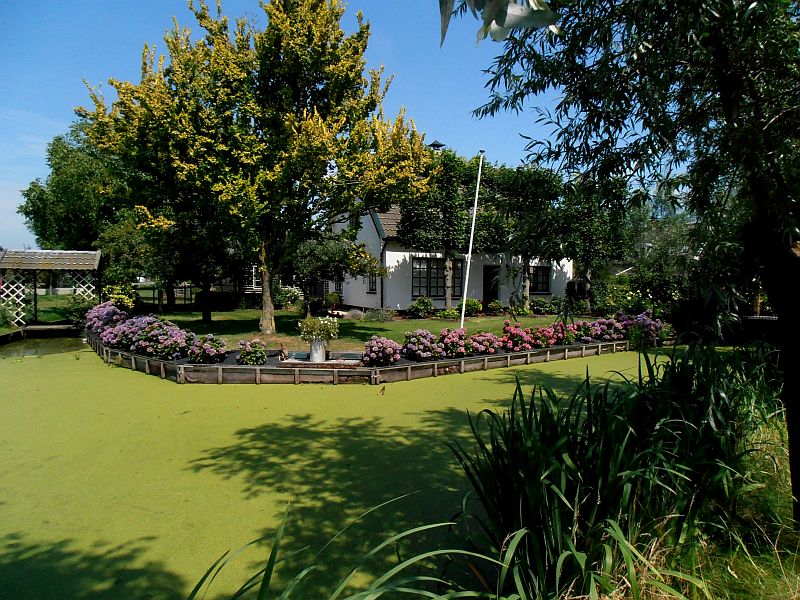 Not all villages obviously once looked so. Just compare the current Giethoorn to that one from the 50s, shown in the most famous Dutch comedy “Fanfare” by Bert Haanstra (see: Fanfare in Giethoorn). But the fact remains that Dutch people care much about aesthetics of their towns and villages. 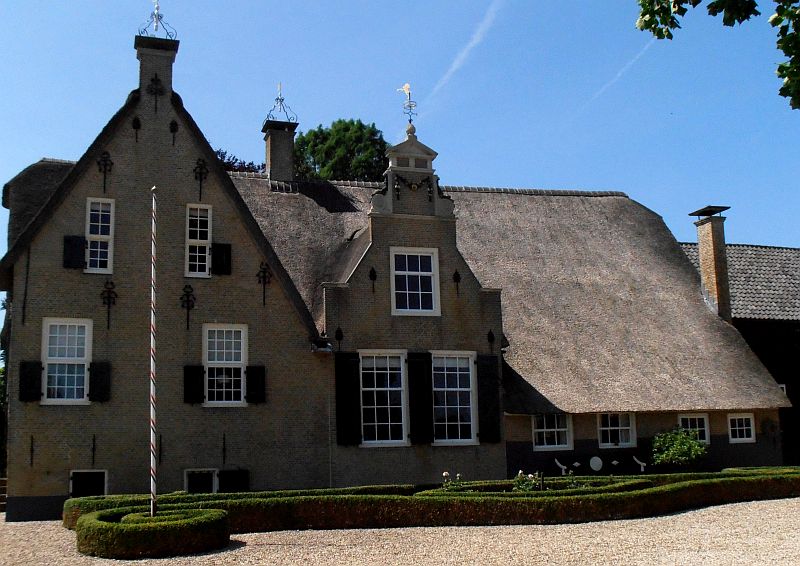 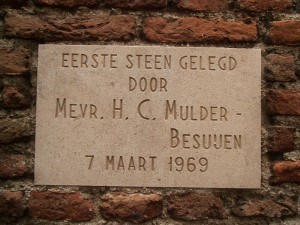 styles, often devoid of a good taste. This Dutch unification is largely due to the type of building material – small brown bricks. “Contemporary Dutch architecture is very modern, but also very Dutch” – wrote Čapek in his letters and it’s hard to deny it after eighty years. Having houses highly similar to each other, Dutch people like to show their individuality by embellishing and decorating their entrances. Even on narrow sidewalks there is room for pots with flowers. 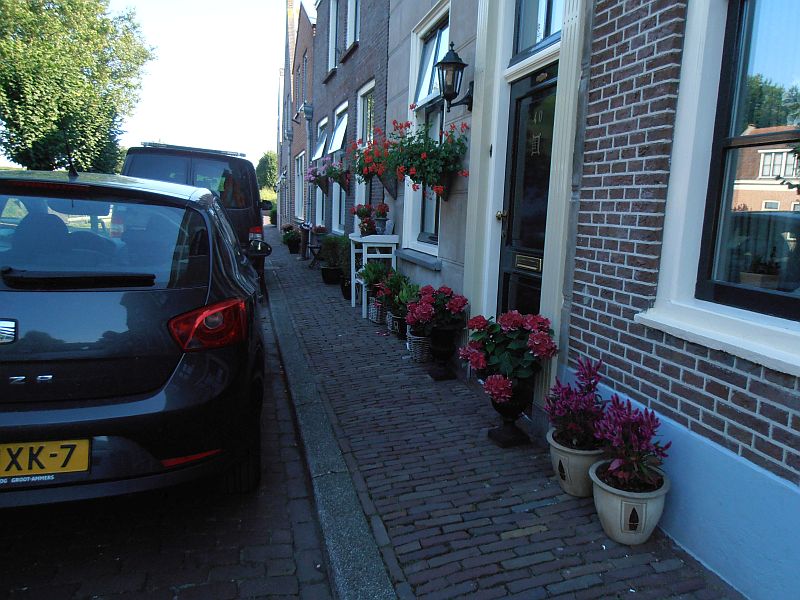 Buildings are decorated with lovely plaques encouraging guests to visit or whatever the owners like. This is the way of manifesting Dutch individualism. 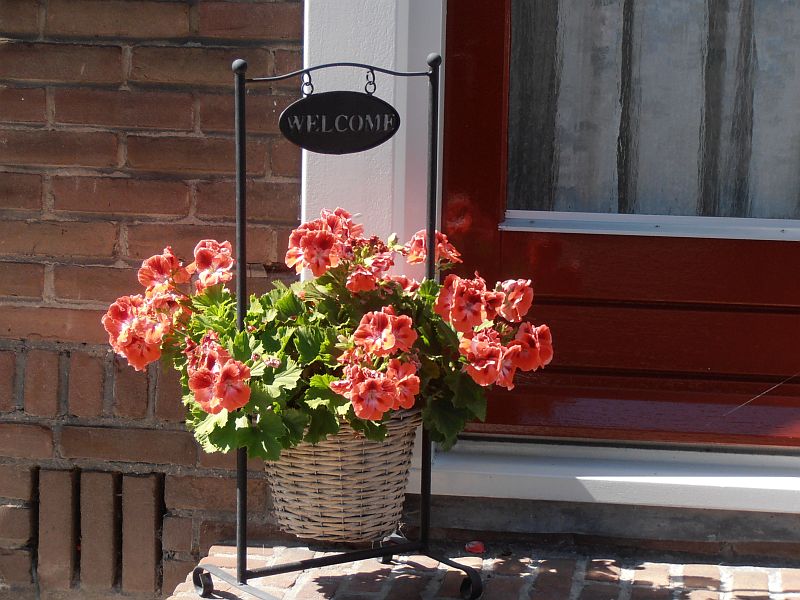 A dutch approach is best exemplified by the windows. Dutch windows – large and mostly devoid of curtains – excite anyone who comes to the Netherlands for the first time. “(…) 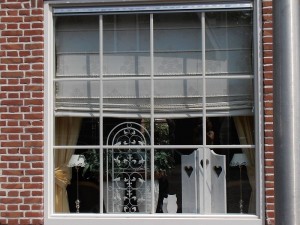 And these cottages, beyond bricks consist mostly of windows, only windows, clean and large, with white frames, and the most diverse sub-windows and dimensions. So let me say that Dutch builders attach the greatest importance to the windows: the wall is a wall, but the window is open, a plastic that can be larger or smaller, wider or higher, and is, apparently, satisfying the individualistic needs of the country ” – so we can read in “Letters from Holland”.

The reason for this is probably more prosaic. The average Dutch house – because of the scarcity of building land – is small and narrow, and as windows are built mainly on the front wall, they are the only opening for the day light. So to let inside  as much of the sun light as possible, curtains are unwanted and people must decorate window in an other, often artistic way. 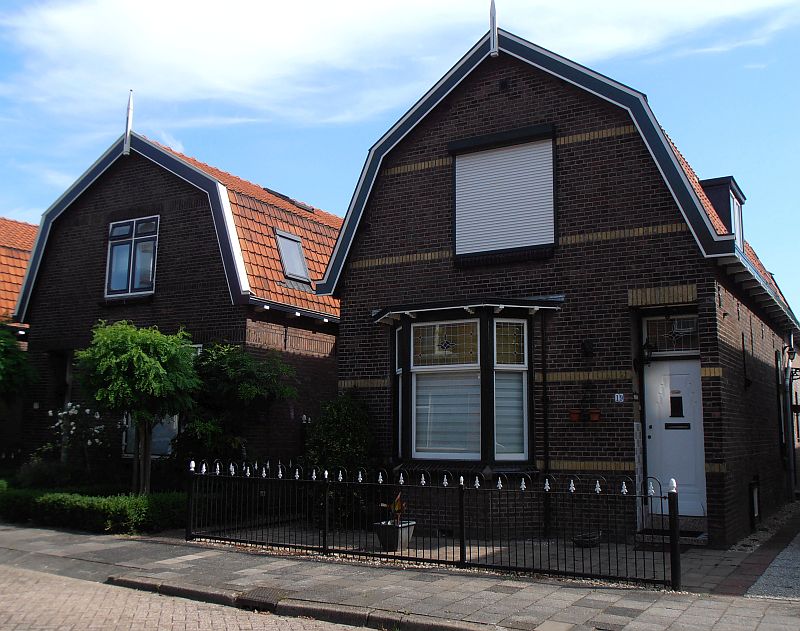 Window is also used to tell people about important events in the life of the family, such as the death of a family member and the birth of a child… 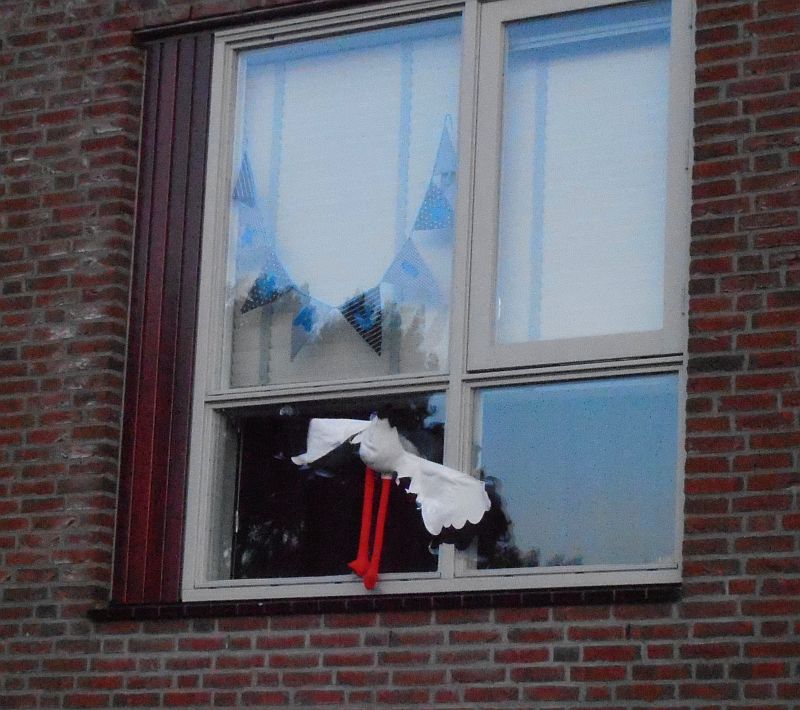 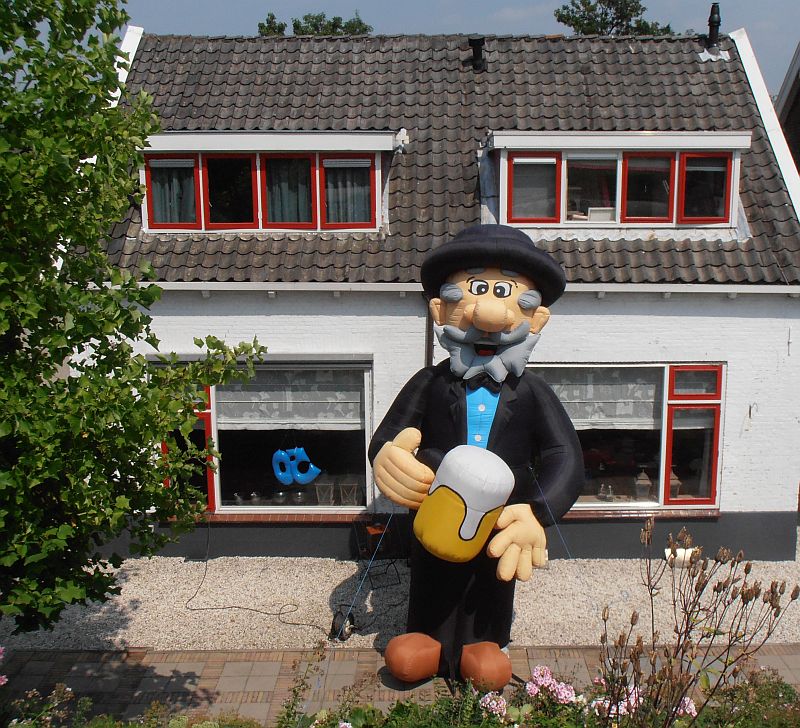 So, for a “raw Calvinist” nation there is a lot of humor and imagination! 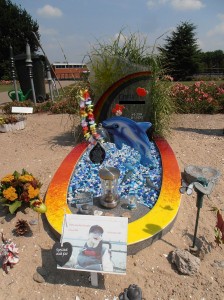 y in cemeteries. Traditional tombstones are situated by the graves in various forms and shapes. Marble slabs are replaced by glass with a cheerful image of the dead, and the main idea of the decoration is to characterize the person “resting in peace” by – to give an example – placing on the grave cards or a bottle of wine. The urns are often exposed to the public view. But what’s interesting – my Dutch companions asked me to erase the names from the pictures, to respect the privacy of the graves. I found it rather odd as the privacy is rather exposed to public view than hidden in this kind of “graving”. Didn’t the man who requested his photo by his urn express his wish to continue to exist? 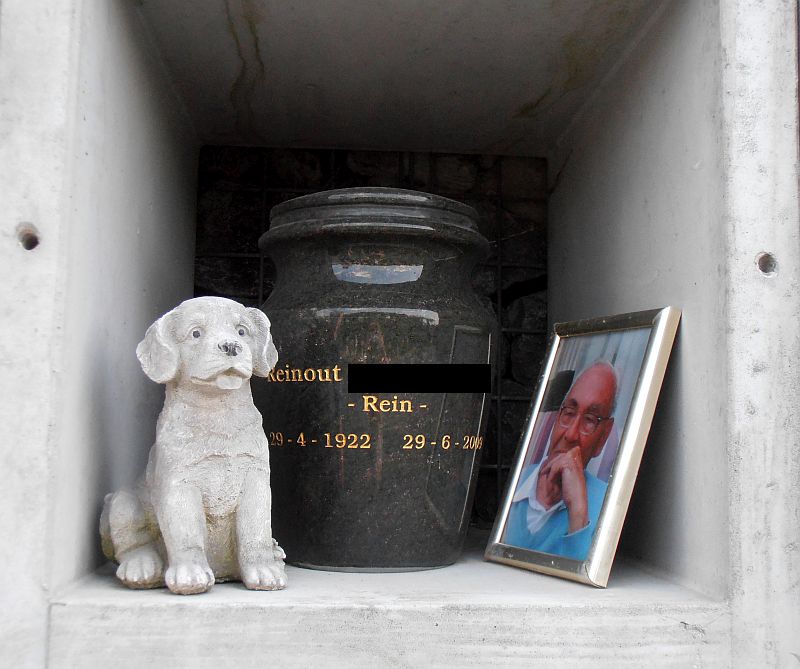 It is difficult for me (raised up in the cult of the Polish graves) to put up with a certain negligence of Dutch cemeteries, but maybe they are right, even with this modernity. In Poland the tombstone megalomania strikes me much. Modest Dutch tombs say a lot about this nation that does not live for showing off… (Read also: Death in the Netherlands).

LETTER 7 – AMONG THE DUTCH

And it is very visible. It is apparently very rich country, but besides houses also cars and clothes are modest. What else can be seen by a casual tourist? Benches and chairs in front of the houses, usually unused by their owners who often place on them some garden flowers. 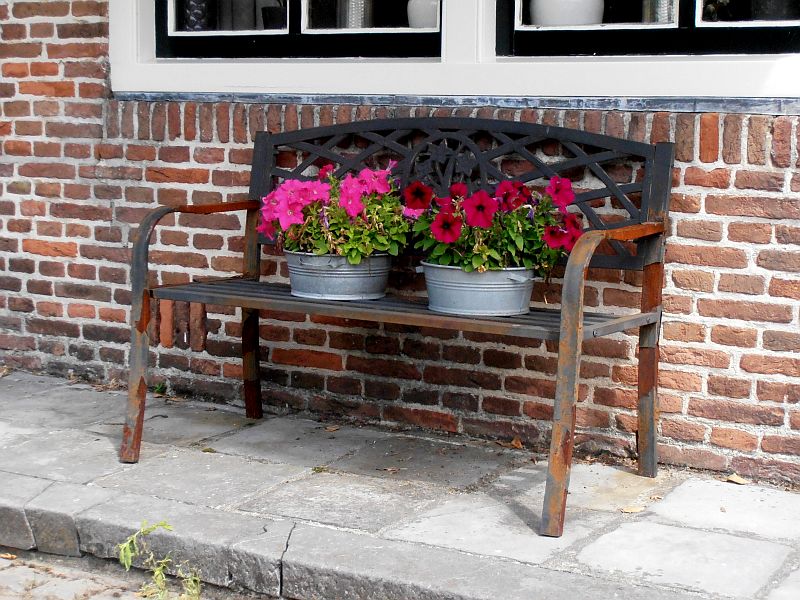 Seems their aim is to symbolize an important role of rest. Life is to be made not only for work – says the Dutchman, who after leaving the work place gets his full private time. That’s why almost on every balcony in the city blocks you can see some chairs and tables. 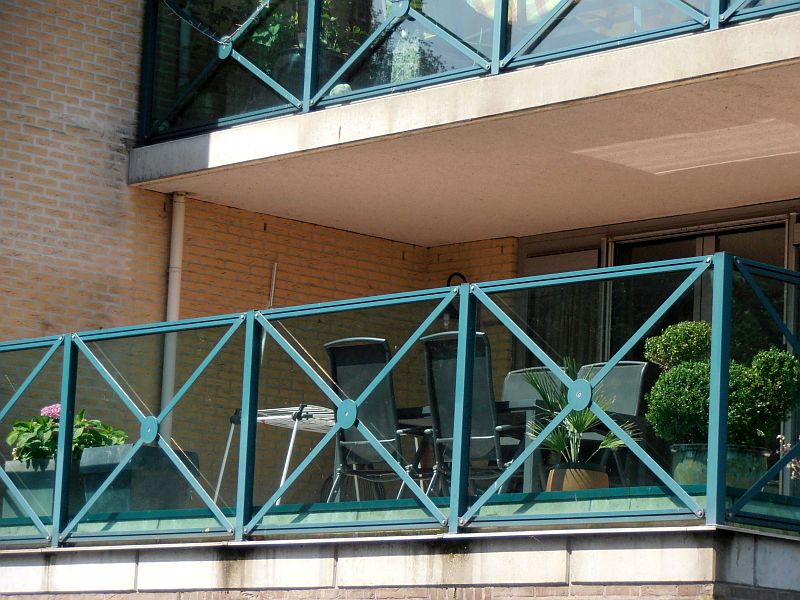 This does not mean laziness however. As it is well known, the Dutch love to ride bikes and it is difficult to meet a guy with a large belly there, which is so typical for a Polish street. 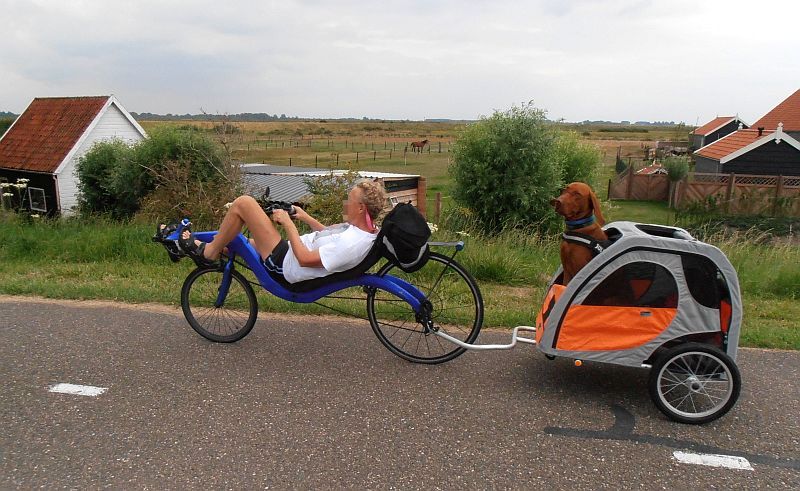 The inhabitants of the Netherlands are also known for a far-reaching tolerance. But on the other hand they still attach a big im 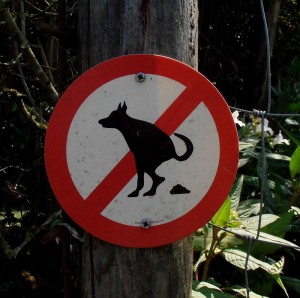 portance to good manners and regulations. You do not need to know the language, or live long enough there to notice it. I adored the fact that during the whole week of my stay I did not notice any empty plastic bottle on the ground. It is definitely a well-organized and well-functioning country that thinks about the distant future today. And it does not accept mediocrity. Therefore, to my surprise, my Dutch companion complained about the hole in the 3rd class road that runs along some flood bank. – “Because anything we do, we like to do it in the right way” – he says. And nicely,we can add, it is evident in the shape of their old fortresses, like the Bourtange one (see also: Fort Bourtange, Groningen). 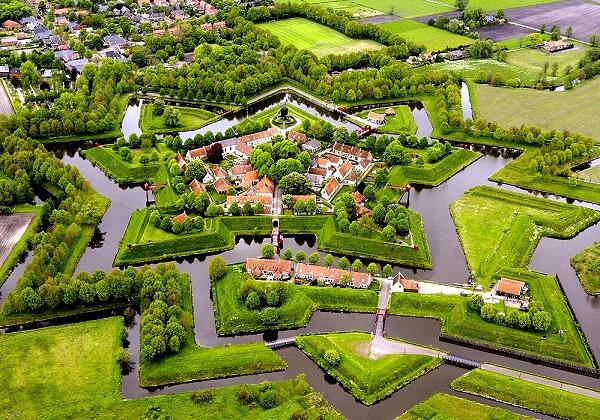 The Dutch are among the happiest nations in the world, although, some cannot withstand this happiness, seeking a second home in Poland. In a completely different world! (See also: Surviving a Polish lady).