In the year 47 AD the Roman general Corbulo builded a number of fortified places including Trajectum, along the main stream of the river Rhine (todays Kromme Rijn). Trajectum means the spot were a river can be crossed. Through the establishment of civilians (traders) the strength of the city (later called Ultrajectum) arose. Via (Ute)trech that name was, by the years, modified into Utrecht (people of the city use to say: Uterech). 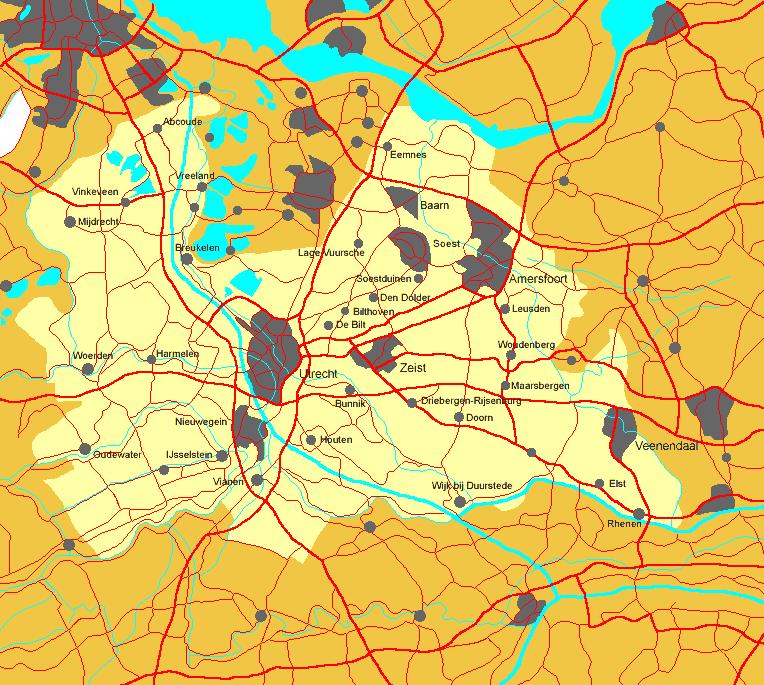 The city of Utrecht
In 722 Willibrord founded a diocese to Christianize the Frisians (Utrecht was their capital). Utrecht was once mainly an ecclesiastical city. Besides the Old Catholic Archbishop, after the return of the Catholic Church into the Netherlands (1853) also a Roman Catholic archbishop resides there again. In 1122 Utrecht received its city charter and was equipped with walls and gates. 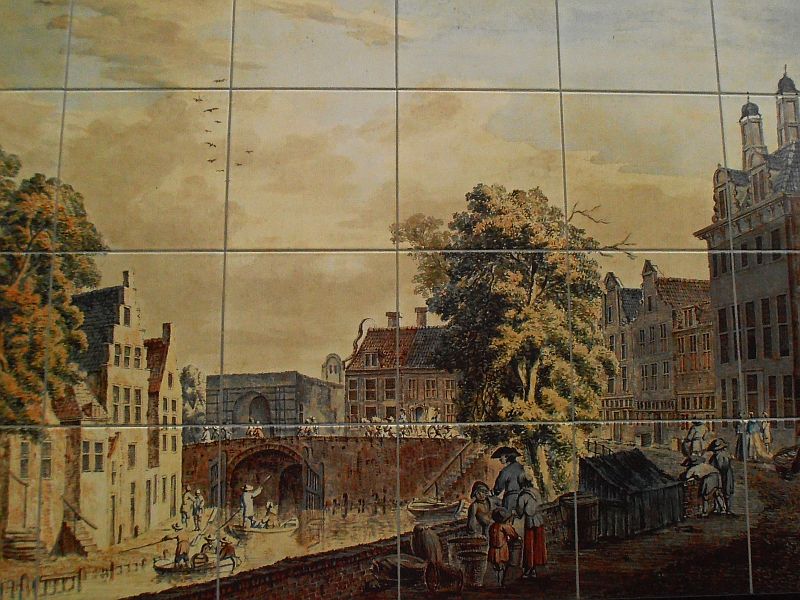 Trade made Utrecht flourishing (the town had four fairs!). In 1674 the city was hit by a hurricane and the cathedral Domkerk lost her nave. 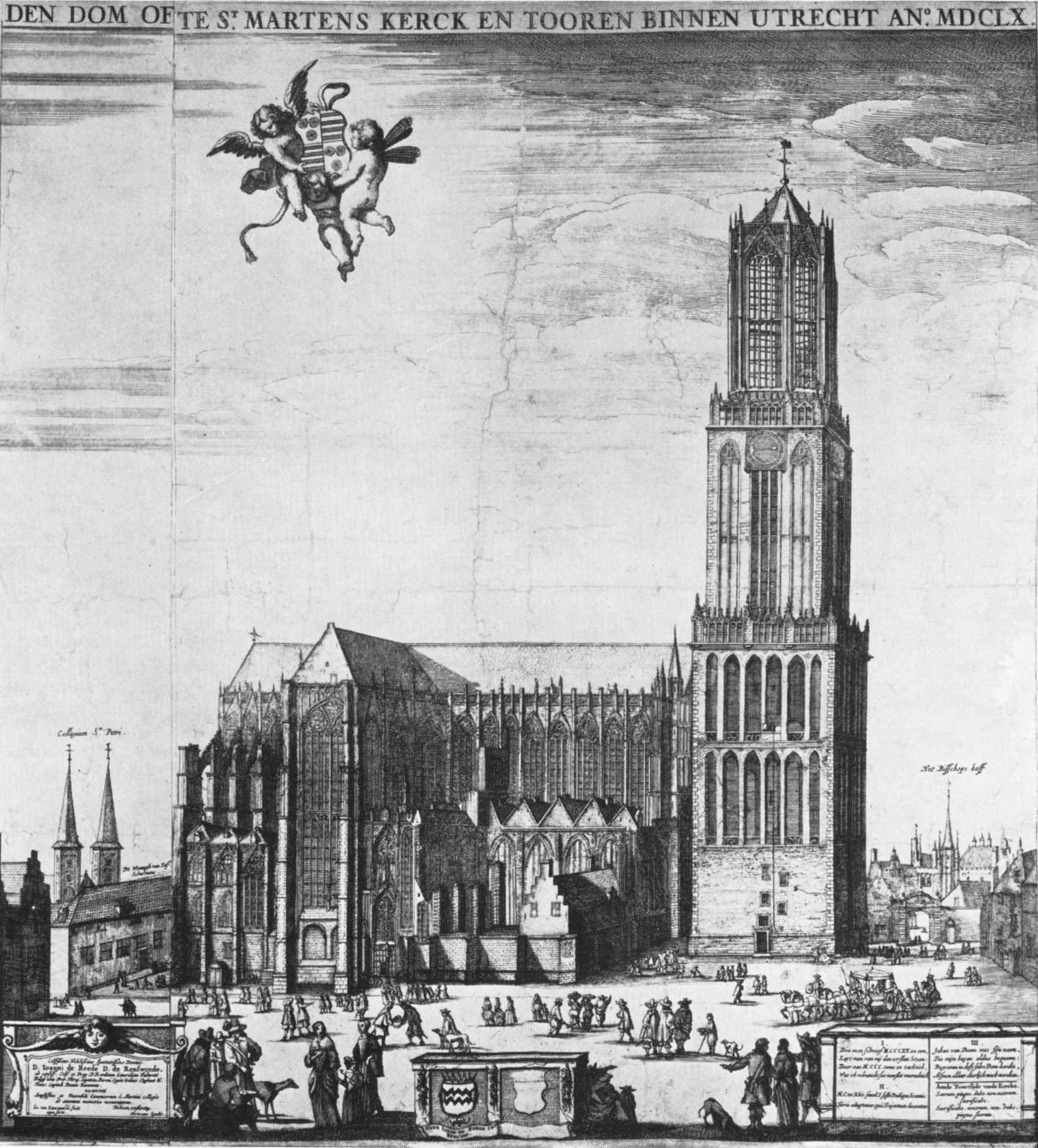 Up today, the tower of the cathedral – Domtorn – still stands completely apart from the rest of the old church. 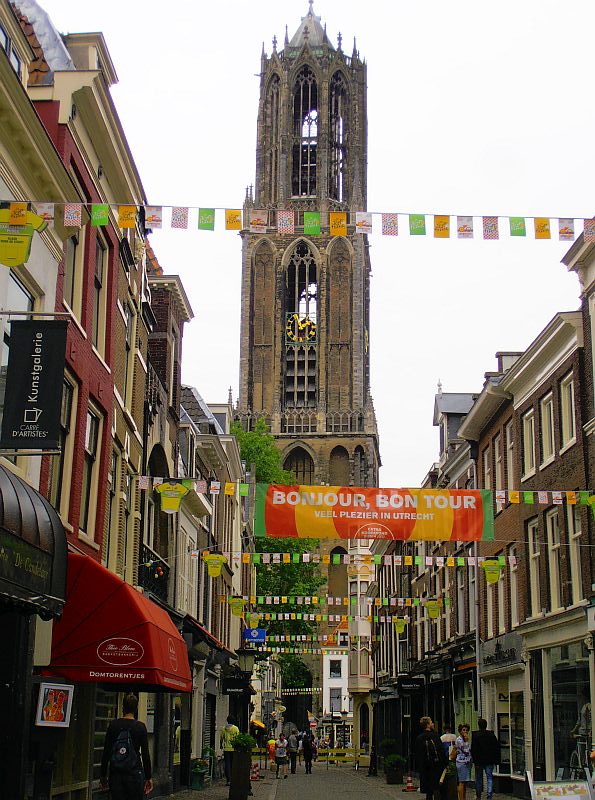 People educated in Utrecht are, by tradition, supposed never to walk the road under the tower! They should pass it along one of the sides. 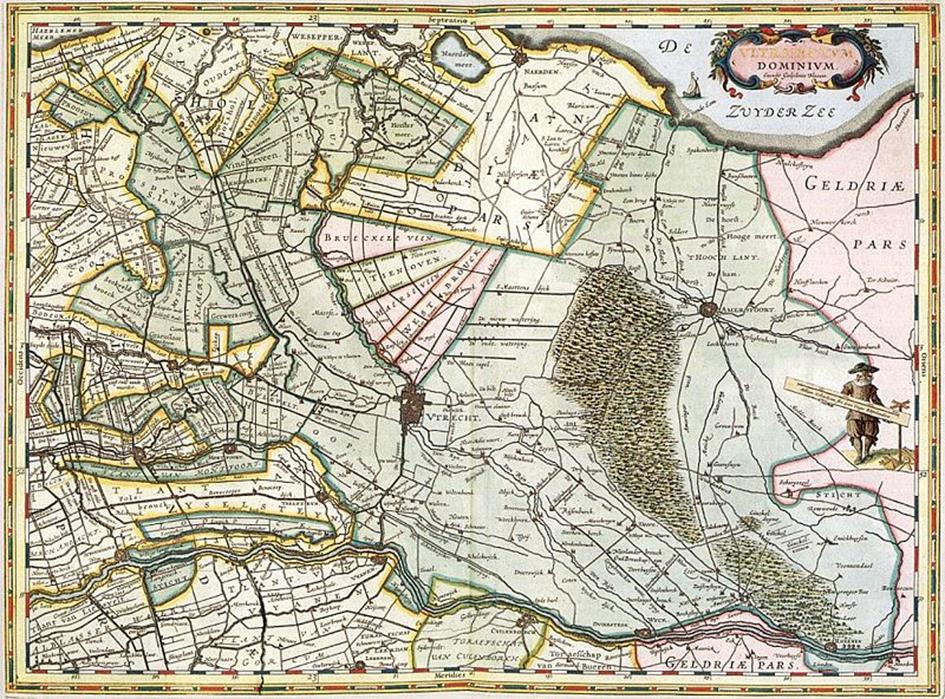 Province of Utrecht in the 17th century

Until the 17th century Utrecht was important as a fortress. French troops occupied the city in 1672 by the order of Louis XIV. After that occupation there was a long period of economic recovery. Then came the “Prussian intervention” (1787), after that another French occupation (1795). In 1798 the (Dutch) Batavian Republic liberated the city. The growing industry attracted many new residents. Between 1816 and 1824 a new defence line of fortresses was built around the town so its walls became unnecessary and they had been demolished to make the room for houses of  the new residents (so far they had to be built outside the old city walls). 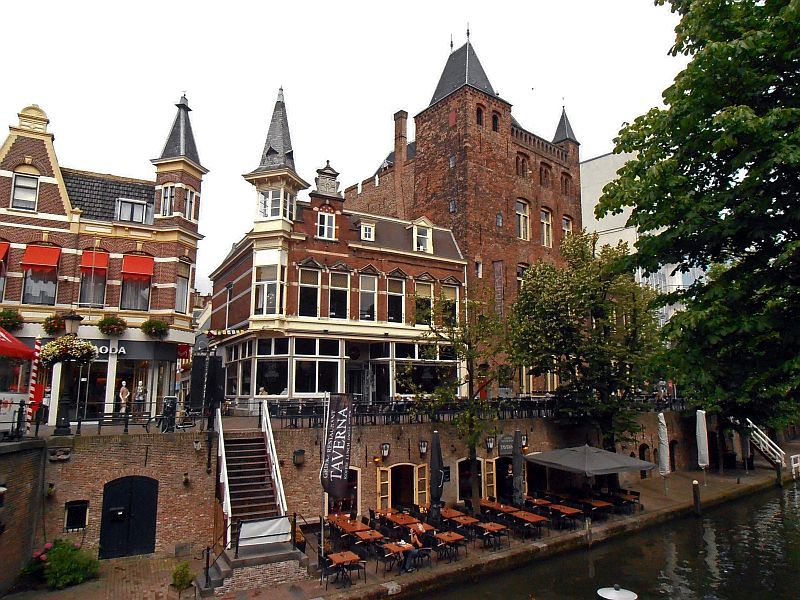 On the right side there is a medieval castle Oudaen, which had in the past centuries defense walls on its sides

So, in the course of the years ‘20 of the 19th century, the city of Utrecht underwent radical changes. (Utrecht has now 165 acres of plants). In 1843 Utrecht was connected by rail to the Dutch capital Amsterdam. Other railway lines followed and the city grew step by step into the center of the Dutch Railway system.

The province of Utrecht (the former diocese)
The board of the Utrecht region has a long history. It started as early as the time of the “Âlde Frisians.” After several attempts, the Romans concluded it is impossible to exercise the authority in that Frisian area around the city. After departure of the Romans local gentlemen fought to get control over the area and the center, then called (Uut-) Trecht fell into ruin. The countryside around it remained inhabited at that time. Only in the late 7th century bishop Willibrord established his headquarters there and from this town a large part of the northern Netherlands was (formal) Christianized and also controlled by clergymen. 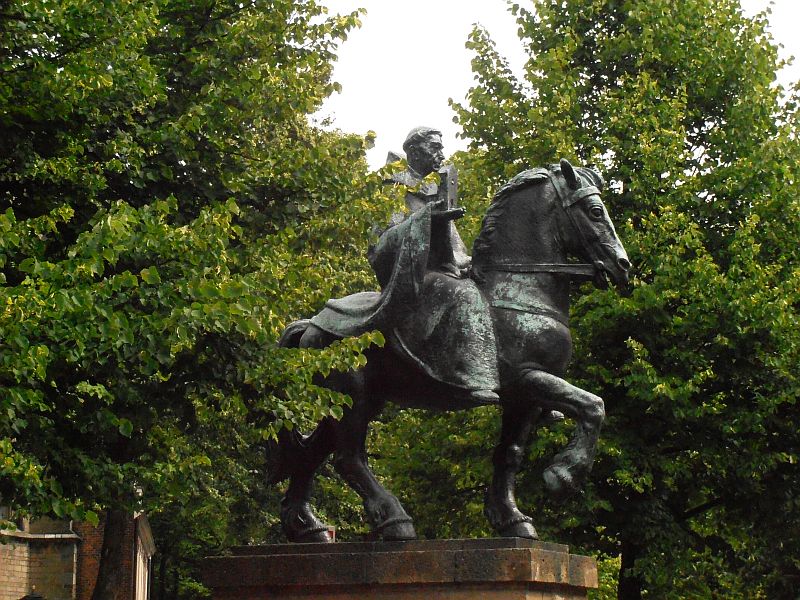 Utrecht could hold this position because of its central location between German hinterland and the coast. But also through the support of other Catholic dioceses, mainly German. In the battle with the Hollanders (formal heirs of the Frisians) Utrecht lost parts of its territory and its prosperity crumbled away by the shifting of the trade routes. The control of the city (over the province) continued to decrease also because other parts of the Netherlands developed economically faster (in 14th century Flanders dominated and Holland from the 15th century). However, the independent regional administration remained more or less intact. It was only really weakened in the 16th century, when the States of Holland gave Prince Maurice the order to march to change the powers in the city. That way a new board was appointed by “the Hague”. During French occupation of the Netherlands Utrecht and the province North Holland formed together “Department of Zuiderzee”. In 1814, with the returning freedom of the Netherlands, also the province of Utrecht revived.

Last secularization
In the course of times in the Netherlands lords like the counts of Holland came into power. These rulers fought with the bishops to get the secular power in this area. Of course, the bishop in this battle used also his spiritual power sources such as excommunication. On May 17, 1375 the reigning bishop Arnoud Hoorne wrote the Stichtse Land Letter decree, under which the three modes: clergymen, nobles and cities formed a controlling body, the Provincial Council. 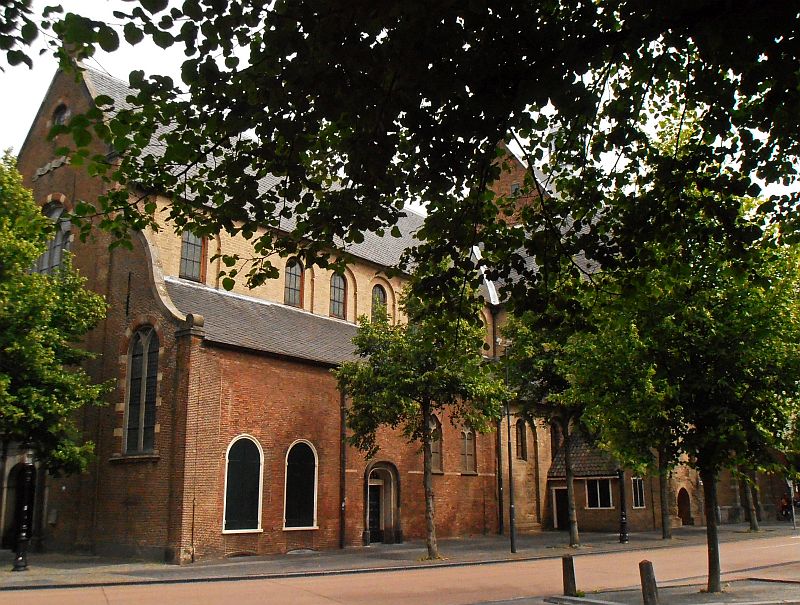 On October 21, 1528 the Emperor Charles V definitively ruled that the temporal power of the bishop of Utrecht was detached from the spiritual one. Emperor Charles could do so because he was not just the “high lord of the Nether-lands” (the name of the 17 provinces conquered by his Burgundian and his Habs-burgian ancestors) but also because a significant number of these regions were a part of the “Holy Roman Empire” wich he ruled as emperor. The secular authority was obviously handed to him, the emperor. Thus there were his  stadhouders (satraps), the administrators of the lordship Utrecht (Sticht), the lordship Overijssel and the landscape of Drenthe (the latter two formed the Oversticht). So all the provinces finally became secular states.

Note:
The old tittle “stadhouder” means instead of the noble houlder).

Until the formation of the United Kingdom the Netherlands the Catholic regions (Staats-Vlaanderen, Staats-Brabant and Staats-Limburg) were controlled directly by the States-General in the Hague. (They were not provinces, had no elected counsels of their own).
The best-known stadhouder who ruled the lordship of Utrecht was Wilhelm I, Count of Nassau-Dillenburg also Prince of Orange, who became known as “William the Silent”, the future leader of the rebellion (against Spanish domination of the regions under the son Charles V, king Philip II of Spain). 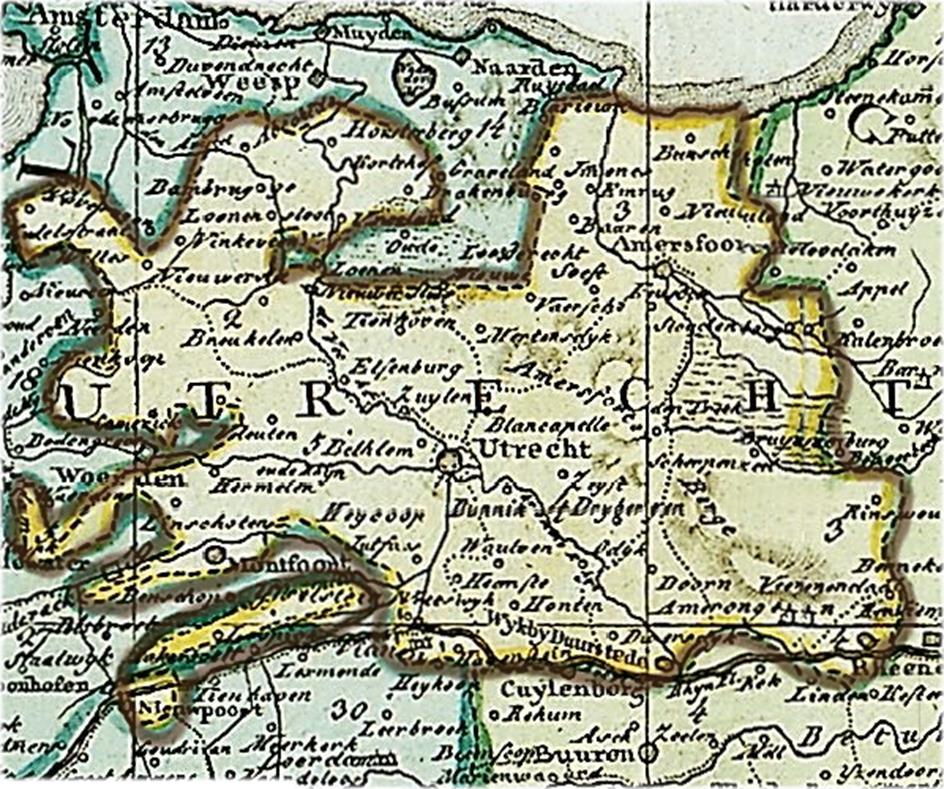 Province of Utrecht in the 19th century

Modern times – to be continued…