There are several possible derivations of the name Groningen, but most likely it is a derivation of the name Gruno. The ending “ing” is an old patroniem. So “Groningen” was the name of a tribe (or a family) that regarded someone called Gruno as their ancestor. In later times that name became the name of the spot and/or the region where this tribe lived.

Province Groningen: Town and “Ommelanden” (countryside).
The province consists of the (cultural Saxon) capital city Groningen surrounded by the (in older times cultural Frisian) Ommelanden in a skewed and inverted U. In the south, the province of Groningen borders on the Saxonian province of Drenthe, in the west on the Frisian province of Friesland, in the north on the Wadden Sea and, finally, to the east on the district (orginal Frisian but today German) East Friesland. Also three small uninhabited Wadden islands (Rottum, Rottermeroog and Rottummerplaat) belong to this province. The province has population density of ca. 250 inhabitants per km2.

The provincial coat of arms is divided into four fields: the Saxonian eagle (the town) and the Frisian “pompeblêren” (the Frisian Ommelanden) are shown both twice.

There is also a view that once there were four quarters. The three Ommelanden and a Gorecht as fourth (with one “sub-quarter”: the town Groningen) pictured as white bars. In addition, the three blue bars indicate, in that case, the three most important waterways. (Eems, Hunze, and Fivel).
Note: The water in the northeast is called “the Dollard”, the water between the mainland and de Wadden-islands in the north: “Waddensea” and the in the northwest the (leftover of the) former “Lauwersea”.

The emergence of the district
The history of Groningen starts about 200,000 years ago, so in the Pleistocene. The Pleistocene was characterized by strongly fluctuating hot and cold periods. In the cold periods during which there were large glaciers all over the Netherlands. In the warm periods they retreated back.
In those warm periods, the glaciers melted and the melting water formed rivers and streams. One of them was the Eems in Groningen and some assume that this river flowed through present Westerwolde.

The waterlevel of the North Sea increased during the end of the last ice age, about 12,000 years ago. So the drainage of the province of Groningen became very difficult. Due to the poor drainage, the water pressure compacted the surface on which wetlands were created, known as the Boertanger Veen. That marshland stretched out over the whole of the province Groningen. Also, there was a long sand ridge which regulated the flow so that the deposits of clay covered the whole province. 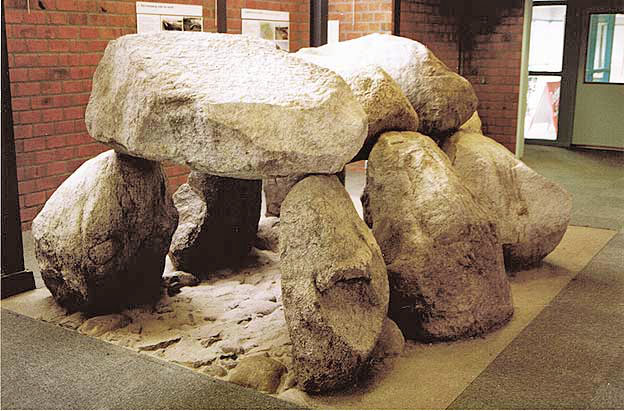 Dolmen (hunebed) today in the Sea-aquarium in Delfzijl

Human habitation in Groningen
In the period around 5,000 – 2,000 BC Groningen was inhabited by people of a pre-Indo-European origin. The two dolmens in Groningen are the evidence to this. Under a thick layer of clay a dolmen was found in Delfzijl and a second one in Noordlaan, near the border of Drenthe. Also other archaeological findings showed that there was human life in Groningen in that period.

Dikes in Groningen
Approximately between 400 and 200 BC. an Indo-European (Frisian) population in the province of Groningen started to make dikes to link the manmade mounds to keep them accessibility under the continually rising sealevels. These dikes needed a constant care because the water level of the sea rose constantly. Nevertheless around the year 250 AD, almost the whole (Frisian) population, was forced to leave the area because of an accelerated rise of the sea level. The Ommelanden were, only after the year 400 inhabited again (partly by Saxon tribes). 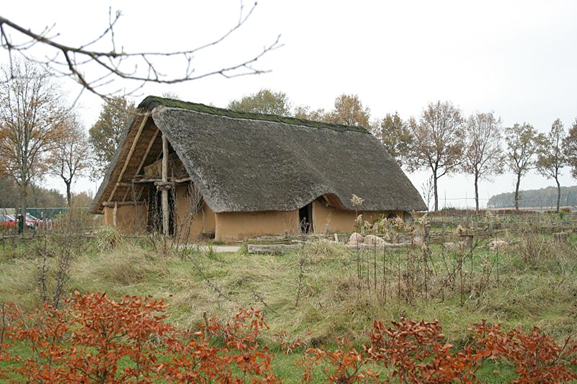 Groningen before the early Middle Ages
In the years from 100 until 400 the Roman influence in Groningen was only small. The extent to which the province was really taken is unclear. From finds in demolished houses and the like, one can deduce that, may be, the town Groningen was occupied by the Roman legions. By the subsequent victories of Charlemagne (in 783), the city and surroundings, so “town and country”, were incorporated into the Frankish Empire.

Groningen in the early Middle Ages
In the 8th century the Frisians in the Ommelanden lived in conflict with the Franks. But the kingdom of the Franks was too powerful, so the “Frisians” were no match to them. Charlemagne attached a great importance to his religion so he wanted the Frisians to take it over, but that was in vain, Charlemagne was not really succesfull. But, nevertheless, he founded the first churches. These were probably made of wood. The first church in stone, was the St Maarten, now called the Martini Church. This church was founded between 925 and 950. 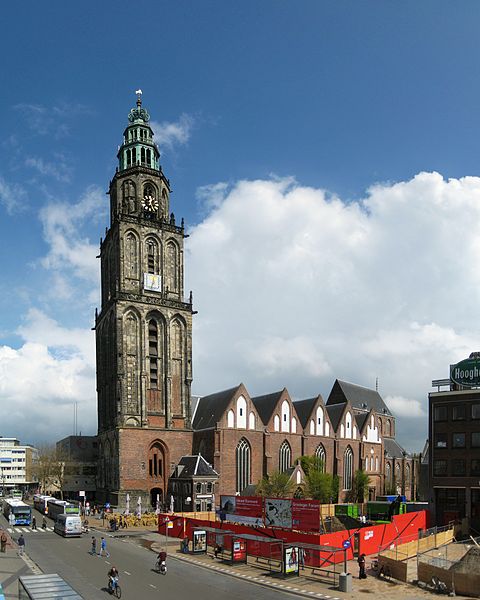 The town of Groningen in the late Middle Ages
In the late Middle Ages, the interests of the Saxon city of Groningen in the surrounding Frisian Ommelanden started to grow. There was a strong battle of words between the representatives of the bishop in Utrecht (who did not tolerate managerial involvement) and the city’s population. Eventually that power struggle was won by the urban elite.

From a city-state to capital of the province
Groningen grew more and more into a fairly large and prosperous trade market. Due to the increasing growth of the other provinces (notably Holland) Groningen could not maintain that position and remained only a provincial market. Saxon Groningen wanted to secure that position and therefore sought an increasing influence in the surrounding Frisian regions (Frisian Ommelanden). The power of Groningen over the Ommelanden grew mainly in the 15th century.

One of the Seven United Provinces
After the provinces Holland (including Westfriesland), Zeeland and Utrecht, the province Groningen (Country, the town joined later) became the fourth state in the republic of the Seven United Provinces. (such with great reluctance of the city!).
The city of Groningen remained different from the Ommelanden, it was rather Spanish and Catholic oriented. For example, the city remained faithful to the northern governor Rennenberg when he chose the Spanish (so the anti-dutch) side in the 80-year war.

The city as a gem (today)

The first battle of the young republic
The eastside of the province consisted of large swamps and was, especially military, difficult to penetrate. Because there was a “pliers” (sandbank) from Groningen to the German border, the town was from that side rather well approachable. So the supply by an “enemy” to the city of Groningen was no problem, as was revealed in the wars with the Germans (bishops of Munster, etc.).
After the Netherlands opted for independence and the provinces had organized themselves. The first truly successful battle (in the 80-year freedom war) in the province of Groningen took place at Heiligerlee. In that famous battle the brother of stadhouder prince Willem I (count Adolf) died.

In the fourth verse of the national anthem of the Netherlands, Prince Willem I sings:

In Heiligerlee there is a memorial for that first battle of the “Eighty Years War” for freedom, that was won by the “young” republic. 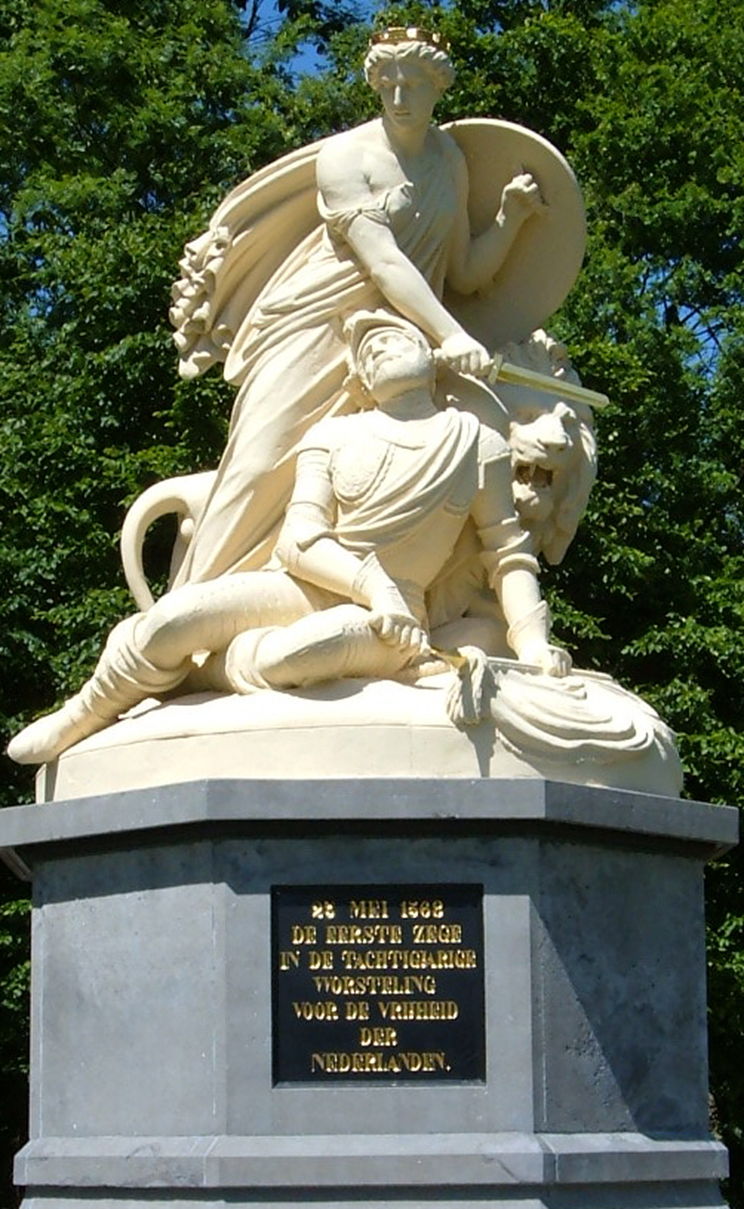 Symbolism:
The fallen Count Adolf (honored in the Dutch national anthem), is taken by a Walkure (the Virgin of Holland), from the battlefield on May 23, 1568. Both are protected by the lion of Holland. The current monument dates from May 23, 1873 and was unveiled by King William III.

The exact location of that battle is uncertain (there were, in that area, so often battles against the Germans, including two against the -catholic!- bishops of Munster), but just south of the village Heiligerlee there is a hamlet called “Tranendal” (the Valley of Tears) so Nomen est Oomen?.
After this battle the States (parliament) of Holland decided that the “pliers” (the access-road through the peat bog) had to be closed. So there was a ramp build on that sandy ridge in the Boertange marshes. 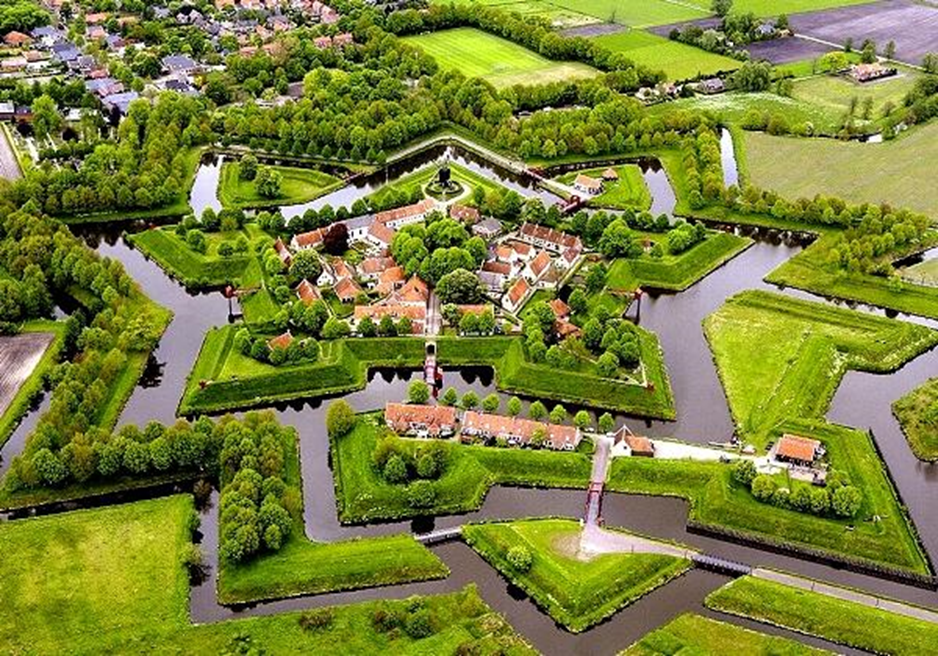 In 1580, William I of Orange ordered to modify the ramp on the sand ridge/path in the Boertanger Marshes on the border with Germany, into a fortress. In 1593 that fort, under the supervision of William Louis of Nassau, was developed into a strongholt. In the years between 1593 and 1851 Boertange proved to be an effective, so an important strength.

After 1851 the marsh disappeared through better soil management (and steam-engine pumping) and cannons grew much stronger. As a result, the village became militarily useless but, after refurbishing it is, today, a real historical and touristic “gem”.

The robbers of the Slochter woods
Long ago the Slochterbos still stretched out to the shore of Schildmeer. Slochterbos was still a big, wild, dark forest. It started at the inn ‘The Crossroads’, which is now Grauw Dijk.
It was no wonder that there was an inn. Travelers, who had to cross the great forest, drank himself first courage, as they were a bit scared. Those that came from the forest also went to the inn and drank in gratitude because the robbers did not overtake them. But John was not afraid. He was in “The Crossroads” and also had to go through the forest, with a bag of silver guilders. Paper money was not there yet. A heavy bag it was. But he had a dog and a sword with him. In the inn were also two other men. Who asked: “Dare you to go through the forest?”
“Yes,” said John, “my sword counts for six, and my dog also has six. More than twelve will not be there.”
“Shall we escort you a little?”
“No, I do not need companionship.”
Jan went away. But the two others were for him. In the middle of the forest the robbers came on him. But John had not said too much; his dog took six, and his sword also got six of them. He cut off twelve robbers theirs heads, and went on.