This is a very touching story of the gift of the Dutch Queen Juliana, who gave it to the people who lost their belongings during the flood in 1953. This beautiful gift was the wooden cradle, princess Juliana was offered by the Polish government during her stay in Poland in 1937. The contemporary successor to the Dutch throne arrived in mountain health resort Krynica in her honeymoon trip. One can read that story in The royal visits on the Polen voor Nederlanders website.

The heroes are Anna and Leen bij de Vaate and their children. Their story was presented in some newspaper as follows:

During the flood Anna, married with Leen bij de Vaate, fled to the family den Bosch she knew and with whom she had maintained contact by letter. Anna lived with her family in de Val near Zierikzee. Her family was in 1953, fleeing for the advancing water. Quote from a letter: “We were almost at Zierikzee when the tractor was sputtering, the engine was under water, the city Zierikzee was three miles away but we just made it. The 12 of us, 6 adults and 6 children, were sitting on the wagon. After many vicissitudes and a tiring journey Leen and Anna bij de Vaate with three little children (Kees, Jannie and Joke) ended finally where they wanted to be. “Arriving at the town hall one could search for what one could use. But my eye fell on a cradle, well not at the cradle that much but on the woolen blanket that lay inside. More Beautiful than I ever had seen. Unfortunately I don’t have it anymore. I was really loving it very much. Ms. Hosang, the mayors wife, came to ask me if I had a baby. Yes, one 6 six weeks old. Then she told me that the crib was donated by Queen Juliana to the Red Cross and send to the townhall. I could get it but, then it had to be picked up within an hour.” 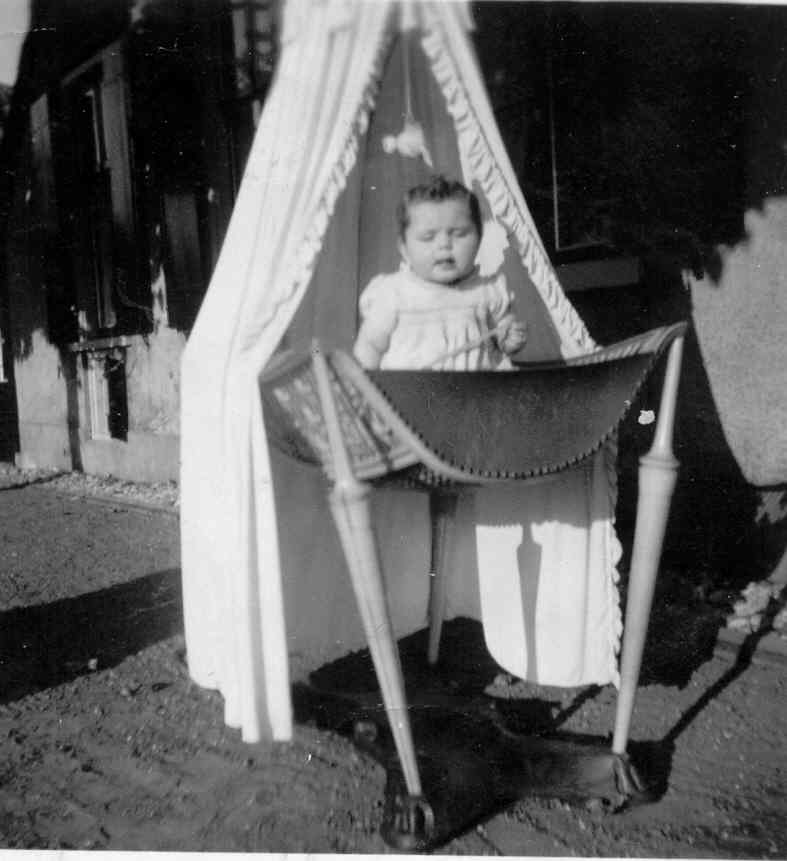 Little Joke in the cradle

The family van den Bosch was, according to the letter from Anna bij de Vaate, proud that a royal crib stood in their house. Anna’s daughter Joke, born January 6, 1953, has always slept in it. The cradle moved back with the family to Zeeland and later two other children have slept in it says Ms bij de Vaate. 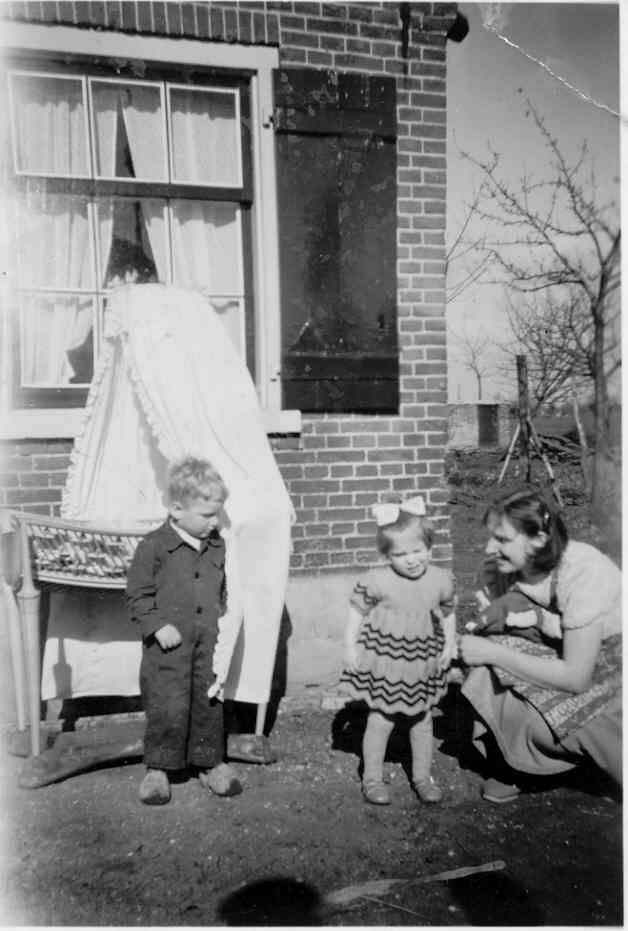 Anna with her kids: Kees, Jannie and little Joke in the cradle, 1953

n June 22, 1954 Queen Juliana visited the barracks where the Zeelandian victims of the flood lived until at least the end of December. Then Anna thanked Queen Juliana personally for the crib. For that it was necessary to follow quite a precedure. She had to ask extensively to speak to the queen – that request went along the police, the mayor and the commissioner of the queen. She was told what to say and what she could not say. With her daughter on the arm and a picture of the crib Anna bij de Vaate thanked Her Majesty in neat terms for the royal cradle. 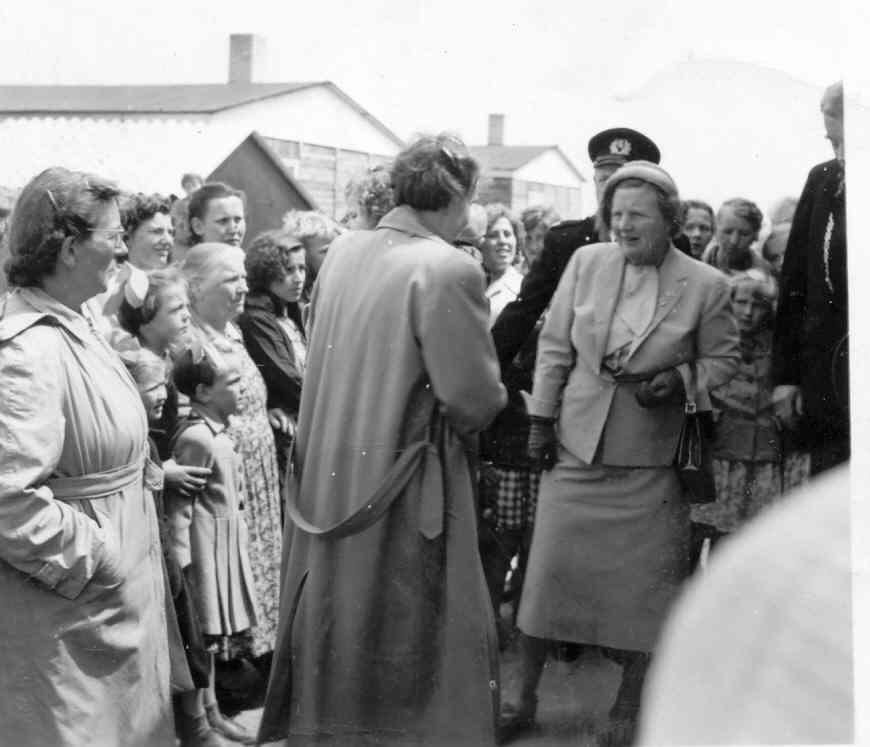 Anna thanks the Queen Juliana

„In the local paper was writen that I had spoken to the Queen in boldness, I thought if they only knew how much effort it took” – says Anna.

Anna gave the cradle to her daughter Joke, who during a visit to the Loo, in a conversation mentioned the special cradle. The museum was interested in the cradle. There followed an investigation into the origin and eventually of the cradle – loaned by Joke bij de Vaate – was transported to the Loo.

It appeared that the crib was manufactured in Poland and the Polish government offered it to Juliana during her stay in Krynica in 1937. A lovely cradle design is inspired by Polish folk art and its contractors were qualified pre-war Polish artists working in Warsaw: Jan Bogusławski (architect, interior designer and furniture ) Artists Cooperative ŁAD (they made silk fabric), the company Initiative (sewing) and Stanislaw Sikora (sculptures).

In 2013 the crib was shown at an exhibition in Watersnoodmuseum in Ouwerkerk, which is dedicated to the flood of 1953. The royal gift became there one of the exhibits representing donations for flood victims in 1953. 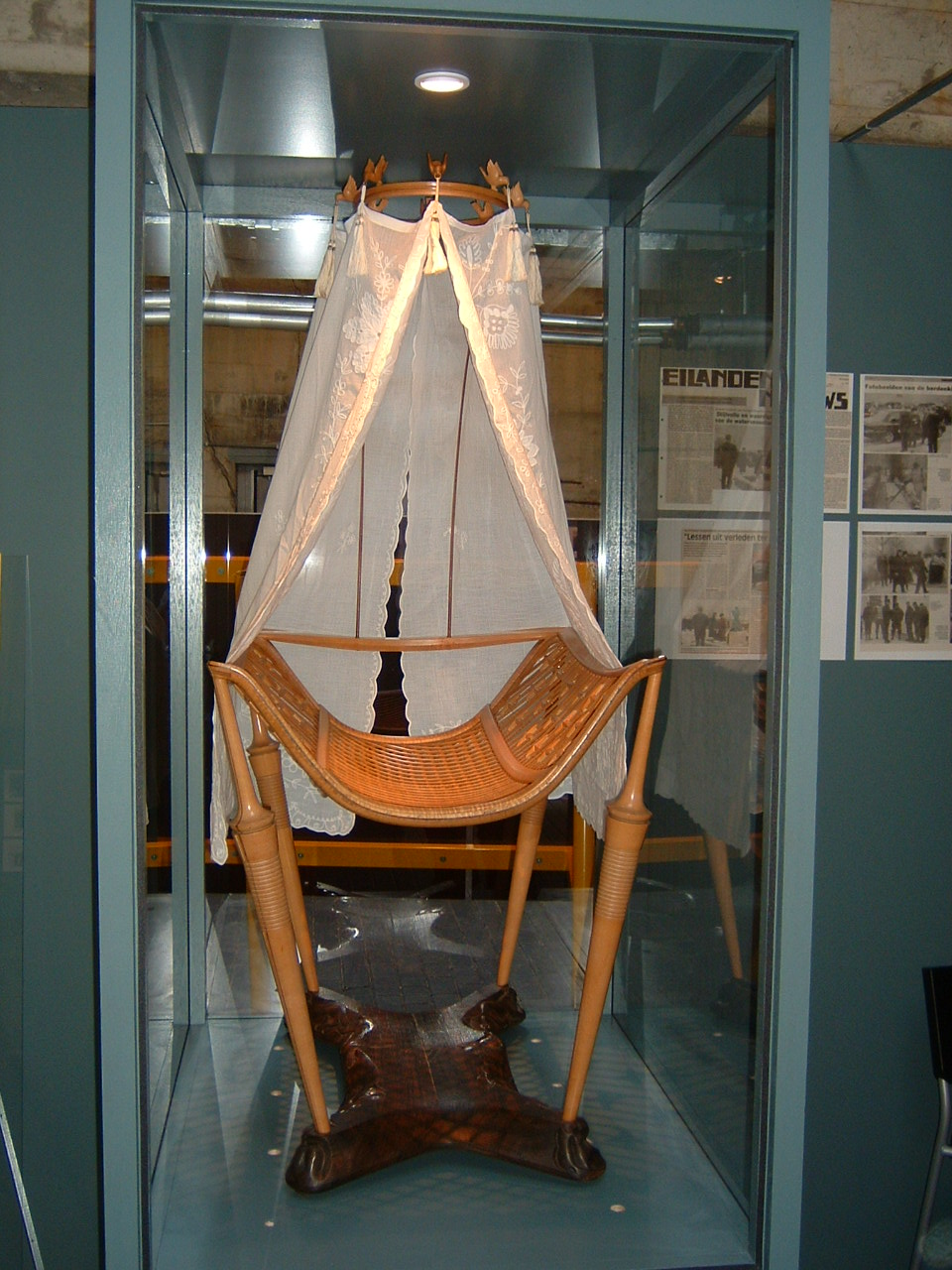 Cradle consists of a bowl placed on four feet of maple trees, and these in turn are located on an oak basis, decorated with feet ornament. The cradle has a canopy of silk, instructed at the top of the rim with maple adorned with sculptures of pigeons. The equipment includes a linen pillow, pillow case and bedspread decorated with embroidery and a white sheet. 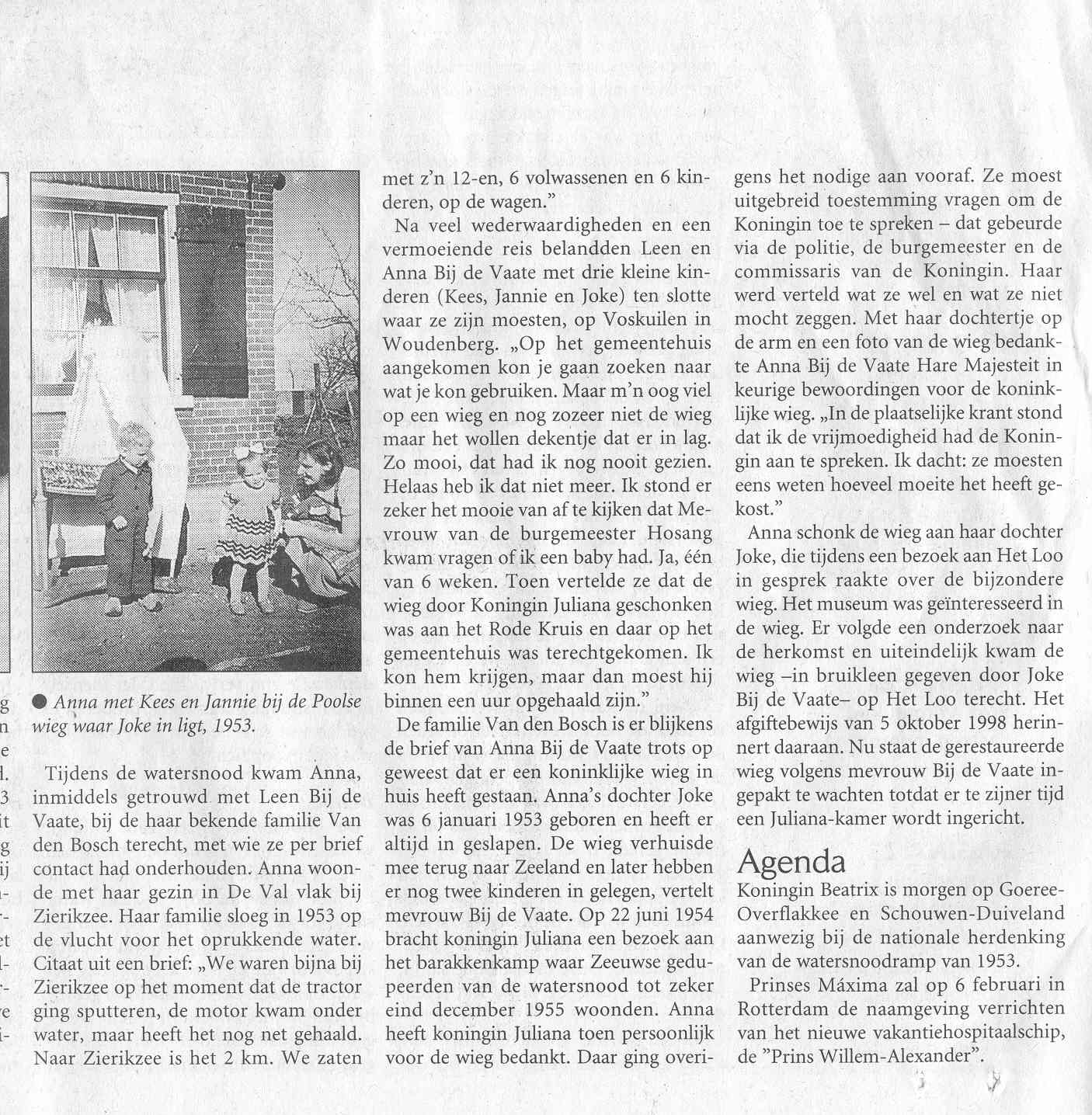 Important note:
The article uses the information, press material and photographs (the vintage and the contemporary) sent by Watersnoodmuseum in Ouwerkerk, for which we wish to thank Ms. Carlien Besling.

We wish to thank also our big friend Josina van Splunder which let us know this lovely story.