The following “letter from the colony” was written in the year 1855 by a young Frisian soldier serving in Indonesian Bencoolen (Bengkoeloe; Dutch: Benkoelen). Bencoolen is the name of a province on Sumatra as well as the capital of that province. We present it thanks to courtesy of Friep Wilbers, whose mother Akke and grandfather Arjan are mentioned at the end by the author of the letter Peter Wilbers. Thank you very much!

As I take my pen to inform you about the main facts of my departure from Holland, about the trip and the arrival in Batavia, so is my heartfelt desire that you may receive them in health,  and I suppose you have been awaiting the moment to hear something from me, so it is my most fervent wish to hear the sooner the better about your health and that of the family, perhaps you already have thought several times it seems that Pieter forget us completely, but no it is just the opposite. A serious illness has prevented me from it, so I also hope that you forgive me and not to see it as an evil indication, I was able to write you sooner, but to inform you that I was seriously ill, I did not want to do and writing I was in good health I was even less able.

But come on, I want to start properly,

r 1854 in the afternoon at three o’clock we left Harderwijk, after that we came on the 12th evening, around 7 hour, accompanied by a violent storm, in the harbor of   Nieuwe Diep, in the other morning at 10 am we were still on the small boats and then we came singing at 11 a.m. on board of the frigate the Five Brothers where we were friendly received by the crew and were got a drink as welcome and in the afternoon we got grey peas and a pound of bacon pro head, there wierd keen hold bites but this was soon done. Image: “Five brothers”, Jacob Spin, 1850.

Now it was waiting for a good wind, it still took 31 days and during that time we had prommenade every day and in the evening from 4 (?) to 9 hours we were permitted to walk ashore, something that rarely happens to the Colonial troops once they are boarded.  On the January 12, 1855 afternoon at 1 o’clock we left Nieuwe Diep with still 94 other ships, but they soon before our eyes disappeared so long as we were still in the harbor all were equally happy and everyone sang a last farewell to his fatherland that may be never be seen again, but hardly we were at the North Sea or anyone became silent, and he that left onces, with that destination, the native soil, will be best to speak what goes on in everyone’s heart; soon we past the last corner of Holland, and all who have loved ones in the beloved Fatherland had to cast one last glance at his birthgrouds but soon the last tip disappeared for our eyes and then we were left entirely to the raging sea. 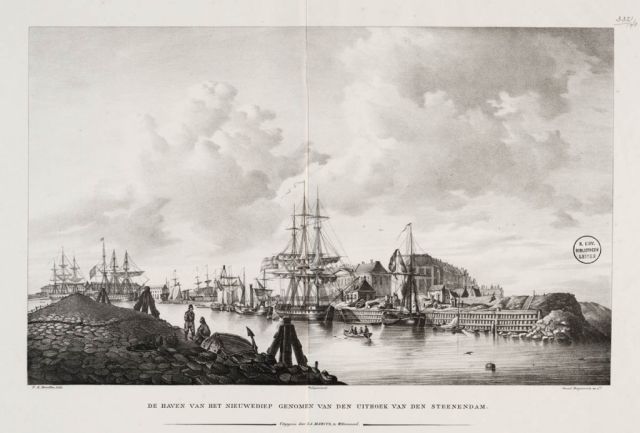 The second day we saw already the English coast adorned with the Chalk Mountains and the third day we came out of the English Channel and on the grounds of the Spanish Sea, we meet several more ships but this was soon done, and here we got a wind making the sea so boisterous that by another swung from port to starboard and vice versa. The 28 days we passed the Line, that this was amazingly hot I will not have to say, it was so to say dead quiet and the sea like a mirror through which we crowd large Fishes saw that surround the ship played and flying fish in thousands; Here we meet a Swedish ship that had lost two masts and half of railing, she was destined for Madera.

The 42 day was our pleasure, in the morning, we got a ship in sight, by noon it seemed to be waiting for us becouse it putted several sails against the wind. At 3 o’clock we were so near to each other that the two ship captains spoke verbally to each another. The ship was chartered with 300 English and German emigrants destined to Australia, most were women with several children, on both sides we were marry and until 7 pm we had time to see one another, but that was all it came to.

At the Cape of Good Hope, we have had a storm but is said of the crew arrived we were well off, we lost not more than the outer jib sail with two flaps.

The 68 day we left the Great Ocean and arrived in the Indian Ocean, this brought no news until the 103rd day when we sailed into Street Zunda in the morning around 7 am and evening at 7 pm when the wind against us hit fell the first anchor a more cheerful evening onboard we had not had the weather was nice and thereby a bright moon, what our hearts desired we could get it was completely a treat and everything so generously dressed that, ashore we could not better , it took almost all night, the next morning about 10 o’clock there came several canoes beside us and offered us fruits but no one was interested for we all were warned for the fruit but many eggs were bought or bartered for something because everyone was looking for something to eat eggs, the captain bought a turtle which we gave our entire group (189 men) turtles soup to eat, it was over 250 pounds heavy.

Four days we crossed Street Zunda so we had the occasion to see the surrounding land (ie mainland Java) very good, it was a delightful sight that lofty mountains from top to bottom to completely green and by nature planted with trees.

On the fourth day (30 April) evening at 4 1/2 o’clock the anchor fell, to our great joy, to the shore of Batavia, from the smallest to the greatest we all were equally cheerful and in the same joyful spirit: the coast of Batavia leaves nothing to be desired, but Batavia from the seen from the shore looks pretty shabby, but as compensation the shops  and the other houses also, are as good as one in Holland dare to think,  the bamboos huts of the natives and Sinezen not included. 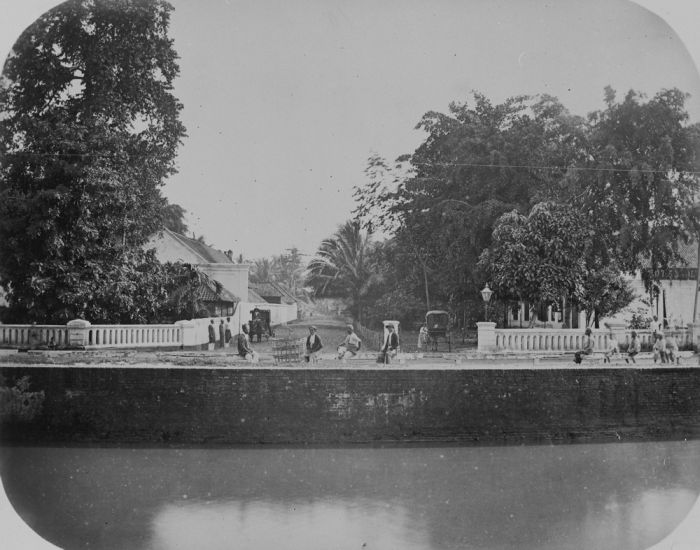 The next morning (May 1) about 9 o’clock we were taken from the ship by canoes  and went to the Country Yard brought where each man got half a bottle of wine and a white bread, here we remained until the heat of the sun was over and at 4 o’clock we marched to Weltevreden where we arrived at 6 o’clock welcomed by Music and many comrades in the barracks, when we arrived everything was ready instead of cold water we got hot tea and soup with bread and meat in abundance.

The soup tasted more than good, but the next day it was all rice what was served, in the morning rice bread with 1 egg or backed fish at 10 a m  rice and at 4 p.m. the same, it is prepared in a strange way, no butter or sugar but rice. On Lombok one sits to nibble on that and believes mouth and body alike are burning down, but once one is able to eat these foods properly, one is happy, because many get sick because they cannot digest the native food.

I have met a sergeant that is also from Sneek, he is a brother or cousin of the Rondema’s. I think he said Jan Rondema.

Here at Batavia at Weltevreden I stayed till May 27 (1st Monday) then I took the steamer the An (~ ~ ~ ~) to leave for Benkoelen where I arrived on the 30th, they brought me from the Steamer immediately to the hospital, with a severe blood deürie, where I am still standing but I hope when I get my strength back to leave the hospital within 14 days, because I’m healed, although in the beginning there was little hope because all I what came out of me was blood, the fourth day I was so weak that I they had to carry me from one bed into the other, it is the most dangerous disease for Europeans because thousands die from it, We are here with an infantry company infantry including 50 gunners and 10 Sappers. Our barracks are a large fortress, situated close to the sea and belonged in older times to the English, it is big and strong and with 105 cannons placed on the bastions, we can stand here long before they come to our clothes, and from prudence people here are always at war, and going unarmed far outside the fort, is highly dangerous, first of all one cannot trust the natives and above there are here in the perimeter many tigers and wild pigs and snails; so going out one is well armed and, typically with 10 or 12 men together. 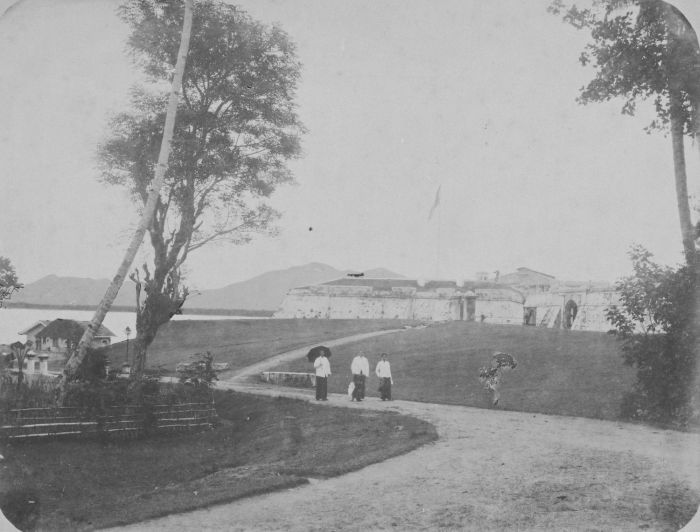 As far as nature is concerned it is much nicer than in Holland it is always green and the trees bear always fruits, pick one off then it makes room for others.

Storms may rage horribly here but without danger, they remains most time between the mountains.  It is good to me here and leave nothing to be desired as I’ve made no promotion but that cannot happen yet because I still lay in the hospital. Now, I must end because otherwise I fear that the letter becomes too heavy, write me back soon and take the paper as thin as possible otherwise it costs double postage.

Further give my regards to the whole family and neighbors, are the neighbors Vogelsang and Disselbergen still healthy? Father be so kind and give my compliments to mister Kooij and Veerkant and bailiff van der Meulen and his wife and also to Do van Hasselt.

The letter of neighbor Franzen I still cannot deliver, no one could tell me yet where he was.

They know he was transferred but did not know where to go.

Is skipper Jan still sailing? Are Akke and Arjan also still healthy. Suppose you did not receive news from Meindert.

Now, Father, I ask you again kindly write me back soon, hoping that thou mayest receive it in health, I remain with respect 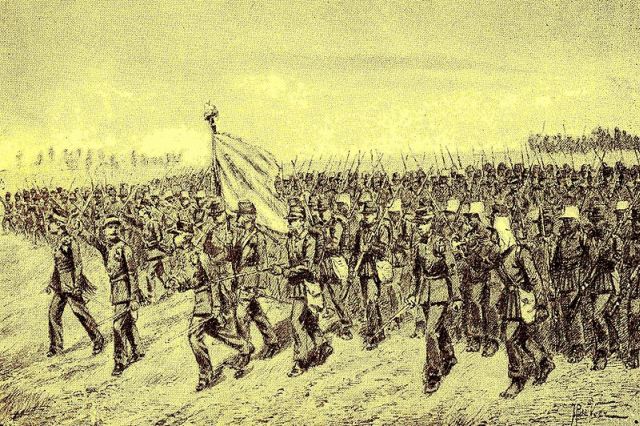 Expedition of the Dutch troops in Penandigan, Southern Sumatra, 1868

1 thought on “A letter from a colony”